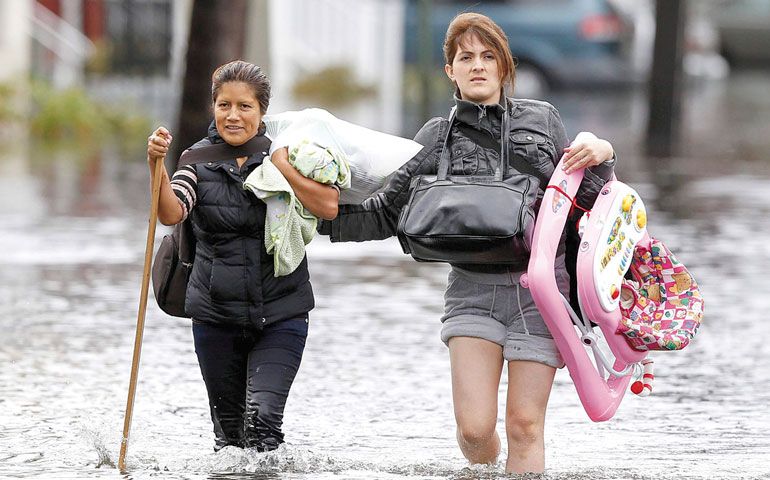 Little Ferry, N.J. — When the water is above your knees and you are sitting on tables for three hours awaiting rescue to higher ground, "there are no emergency demographics," said Regina Coyle. Recounting the night of fright and flooding that came with last year's arrival of Superstorm Sandy, Coyle recalled with tears and thanksgiving the deliverance from the storm that flooded her house, her church and the parish hall she had prepared over many days as an emergency shelter for the neighborhood.

Just hours before Sandy struck in late October 2012, Coyle and her co-workers and volunteers looked over their handiwork with pride. They had assembled cots, blankets, a well-stocked kitchen and pantry, and a toy- and game-filled play space for children. Most important, St. Margaret of Cortona's parish hall in Little Ferry would be an animal-friendly shelter. It offered dog, cat and bird food and feeders in abundance.

Coyle, a trustee at St. Margaret and a Community Emergency Response Team (CERT) member, recalled that when Hurricane Irene struck in 2011, many people refused to vacate their homes because the local school that was serving as the town's shelter would not accept animals. "These are not pets; they are companions that seniors, parents and children will not leave home without," Coyle told NCR in an extended interview in the refurbished parish hall here in late August.

On the night that Sandy forced its fury into Little Ferry, 125 people gathered in the parish shelter, many of them parking their cars in the lot outside. About 11 p.m. they heard a sound like that of waves breaking on the shore. It continued to "crack, crack, crack," Coyle said. Within minutes a wall of water began streaming through the large doors of the parish hall and classrooms.

Much of northern New Jersey had already lost power earlier that evening, but Coyle, sitting in the dark as the water rose, still had her cell phone to connect her with other local CERT and EMT workers. She quickly learned -- if she had not already figured it out -- that a tidal surge had breached the gates of the Hackensack River, about four blocks from the church. Her house and the homes of several shelter guests were already being flooded, she reckoned.

The promise of help and removal to higher ground -- the town's municipal building -- was only a bus ride away. But with downed trees, hurricane-force winds and doors that no one could get open, the frightened masses inside the parish hall had to wait three hours for rescue.

In the glow of flash lights, "we prayed. We prayed that no one would be injured, no one electrocuted, that the water would not rise higher, that we would all get out." Coyle prayed silently that the three cats on the third floor of her house would be safe. After three hours of waiting atop church tables, the rescue workers and the folks inside were finally able to pry the doors open. By 2 a.m., everyone was safely ensconced in the Town Hall.

Measurements of the riverbank taken the next day showed that water had remained for seven hours at a height of 9.6 feet. The next seven hours it receded to only 7 feet. Inside the hall it reached 3 feet, Coyle said, pointing to a marker on the repainted wall.

After two days, a brigade of volunteers swept the remaining pools out the door -- aided by a massive delivery of buckets and mops from Home Depot. On day three after Sandy's wallop, the gym-sized hall was cleaned and readied once more to serve as the neighborhood shelter and recovery center.

"This was the only game in town," Coyle said. "Everyone came here." She recalled how Sandy had "wiped out" most local stores, leaving the borough with no delis, coffee shops or pharmacies. Most mom-and-pop businesses in the working-class town were also destroyed.

For three weeks, volunteers provided food, emotional support and spiritual aid to some 200-300 families daily. Wal-Mart sent a truckload of water. The local hardware dealer in nearby Ridgefield Park delivered a host of needed supplies. Diapers, toilet paper and foodstuffs poured in and filled the hall's pantry. Across the way, a busy kitchen with its roster of cooks turned out three meals a day. Helpers arrived from as far away as Indiana and Massachusetts.

Coyle said she was surprised when a television reporter asked her about the diversity of the group assembled in the hall. "There were no demographics in this disaster," she said. "We were not white, black, Hispanic, Christians, Jews, and people of other or no religion. We were all wet; we were all hungry; we were all frightened; we were all without electricity; we were all flooded here and at our homes."

Besides citizens of Little Ferry and neighboring Moonachie, which was also flooded, six members of the National Guard -- five men and one woman -- moved into the shelter. "They were damp and cold and toting 50-60 pounds of gear on their backs," Coyle said, "but they knew our burden was greater than what they were carrying."

The National Guard troops helped empty a flooded storage room and restock it with dry goods, using a 48-foot truck donated by UPS. The vehicle remained parked outside the hall for days. But the flooding totaled all of the cars that had been in the lot when Sandy struck, leaving scores of people with no means of getting to work.

Throughout the three weeks following Sandy, Coyle used her grit and her wit to make the unbearable manageable, the hellish humane. "I have a big mouth, but also a team of people who have celebrated all the gifts God has given me," she said, brushing aside any accolades about her leadership skills.

In her hands she held up "the keys to the kingdom," acknowledging her complete responsibility for the parish plant in the absence of St. Margaret's pastor, who was in hospice (see below).

A graduate and distinguished alumna of Felician College in Lodi, N.J., Coyle began her career in microbiology at St. Mary's Hospital in Orange, N.J. Later she worked nearly two decades in medical sales and in educating patients about the pharmaceuticals needed for their health care.

After years of traveling between her employer's corporate base in California and the East Coast, Coyle developed Ménière's disease and retired. But she could not abandon her desire to help people. Soon the tall, broad-shouldered local gal could be seen driving an ambulance and assisting Little Ferry's First Aid Corps, as a newly trained and licensed EMT. She was also engaged in programs to assist local veterans. Besides her trustee role at St. Margaret, she serves as a eucharistic minister and on the parish finance committee. She also assisted her elderly parents, with whom she stayed nights after Sandy struck.

Coyle brought her knowledge of first aid and first response to all who came to St. Margaret's hall. She urged seniors to be more self-reliant, to look out for each other, to know what medicines they needed and where they were kept. She taught them how to text 911 and offered advice on planning for disasters. Having battery-operated lanterns and radios handy and knowing how to use them are crucial, Coyle told seniors.

She connected scared teens, whom she called "too cool to show their fright," and children "anxious over things they shouldn't have to worry about" with counselors from New Jersey Hope and Healing. The crisis counseling service is a project of the state's Division of Mental Health and Addiction Services, Disaster and Terrorism Branch, and is supported by a Federal Emergency Management Agency grant.

It's natural for youngsters who've lost animals, seen their grandparents' home destroyed, or had their toys and memories washed away to feel sad, depressed, hopeless, angry and fearful, Coyle said. But knowing what to do when disaster occurs promotes survival skills and resilience, she added.

Coyle called it "miraculous" that with no phones, no communication and no power for days, the parish hall became the central gathering point and help station for thousands of desperate Sandy survivors.

In May, Coyle received a $50,000 "Making a Difference" award from the Russell Berrie Foundation of Teaneck, N.J., for coordinating the cleanup of the hall and turning St. Margaret into a resource center for Sandy's victims. Named after the late toy magnate, the Berrie prize honors "ordinary people who do extraordinary things," according to the citation.

Coyle, who insists, "I have everything I need," is busy dispensing the grant to local and national groups affected by Sandy or prominent in the recovery efforts. As the storm's anniversary neared, she said she planned "to lay low," but would love to bring the six National Guard troops back and have all who used St. Margaret return and "raise a toast to everything God gave us."

Parish 'raised from the dead' after flooding

LITTLE FERRY, N.J. -- Parishioners at St. Margaret of Cortona Church could see themselves as people out of the pages of the Old Testament Book of Job. Their homes, cars and businesses were destroyed when Superstorm Sandy leveled its deluge on the town and neighboring Moonachie Oct. 29, 2012.

Not only did most of the town's 10,600 citizens have no dry place to live, they also had no church in which to pray for relief. Their parish church sustained three feet of water, buckling its floor and walls, damaging pews and ruining all vestments, the organ and the public address system.

As if that were not enough, their pastor of the previous dozen years, Fr. Art Humphrey, 63, lay dying of melanoma in a nearby hospice. Trustee Regina Coyle held the keys to the parish and decided, with other church leaders, not to tell the pastor of the devastation, but to keep him at peace in his final days.

Four weeks later Humphrey died. Parishioners managed to hold a vigil service in the damaged church before the priest's coffin was moved to nearby St. Francis of Assisi Church in Ridgefield Park, N.J., for his funeral.

In the months that followed a $1 million restoration of the church, which was the most heavily damaged by Sandy of 50 churches and schools of the Newark archdiocese, got underway.

The 600-family parish, which combines members from Little Ferry and Moonachie, filled with more than 800 worshipers Aug. 11 as parishioners and townspeople jubilantly marked its rededication and the installation of its new pastor, Fr. Kevin Carter, who has been working at the parish since February.

The ceremony began with a procession from the parish hall where parishioners had been worshiping for months and culminated in a festive two-hour liturgy that paid prayerful attention to the church's doors, walls, baptismal font and altar. Parishioners rose to applaud Auxiliary Bishop John Flesey, who told them: "I have good news for you: St. Margaret of Cortona Church has been raised from the dead."

Your thoughts on a humble church, role of women, clergy sexual abuse and more