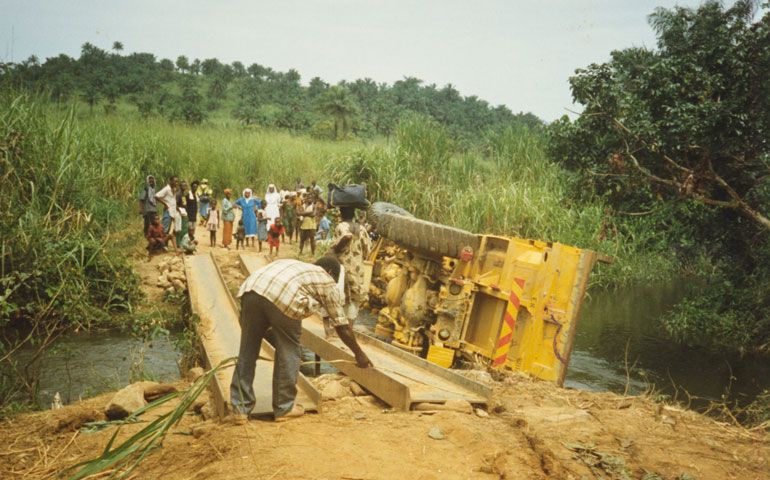 A caravan of School Sisters of Notre Dame, schoolgirls and others fleeing rebel violence in November 1992 in Sierra Leone waits on a back road as locals repair a bridge that buckled, overturning the caravan’s truck.
This article appears in the Mission Management feature series. View the full series.

Editor's note: This is the first in series of articles on trauma and missionary life. Part 2 will describe a model program for returning missioners.

The biblical mandate to "go therefore and make disciples of all the nations" (Matthew 28:19), should have come with this disclaimer: If you are a missioner in a conflict zone, your emotional and psychological well-being will be shredded, you will destroy your life as you currently know it and, by the way, you may be killed. Any romantic ideas about Christians traveling overseas on mission are patently false.

Yet, some people still do.

Why is it so psychologically treacherous for missioners to go into conflict zones?

"Trauma is an occupational hazard," said Robert Grant, a psychologist in Oakland, Calif., who has spent more than 20 years teaching, writing, training and counseling missioners and others.

Grant has trained U.S. and Canadian combat troops and chaplains on trauma. He is the primary author of the combat trauma and operational stress protocol currently used by the U.S. Marine Corps for its troops worldwide.

His work in missioner trauma grew out of his earlier work on child sexual abuse in the church.

The impetus to send missioners to foreign lands came in 1961 from Pope John XXIII, who made a special request that U.S. religious orders send 10 percent of its members to Latin America as missioners. Men and women religious responded to this call.

"Missioners are the Marines of the church. Many are gung-ho," Grant said.

For decades, organizations have sent people into conflict zones with no preparation or training in trauma.

"I tried for years to get religious orders leadership to open up to trauma, to bring trauma out into the open," Grant said. "It's very frightening to leadership because it opens up a can of worms."

In 1988, Kathy Schmittgens, a School Sister of Notre Dame, was a missioner to Sierra Leone as a science teacher. Her first four years were peaceful. But then things changed for the worse. "Trouble started in Liberia with [President] Charles Taylor and refugees started coming from Liberia [into Sierra Leone]," Schmittgens said.

"The conflict kept getting closer," she said. "We could hear at night the gunfire and explosions."

"People were getting nervous and agitated. We drove in a Mitsubishi SUV to the main road and saw thousands of people on the move," she said. There were two vehicles, one driven by a priest and one driven by Schmittgens.

"At a police roadblock, I was held at gunpoint by a person on drugs who said, 'Give us one of the vehicles.' I stared straight ahead and the priest in the other vehicle got out," she said. Another police officer defused the situation by pointing out that they were driving Catholic mission vehicles.

After being assured that they could go back to their home, Schmittgens returned. "We didn't plan at all [to leave], so we went back to make provisions for our cook and watchman," she said.

At the same time, a priest from a neighboring town brought nine schoolgirls to Schmittgens' home, asking the sisters to take care of them.

Every morning Catholic organizations would use shortwave radio to get updates from the diocese and others. Parents of five of the girls sent out notice that they were looking for the kids and got reunited. Four girls remained with sisters.

Then the second rebel attack came.

Schmittgens locked everyone in the house. "We heard a lot of shooting," she said. While listening to the BBC on a radio, they heard that five Precious Blood sisters had been murdered in Liberia. Schmittgens worried that she and the others might suffer the same fate.

It was time to go.

Avoiding the rebel-held main road, four vehicles packed with the girls, the sisters and others -- 30 in all -- headed out on a 36-hour road trip. The clutch on one vehicle broke, so they squeezed into three vehicles. Dirty and exhausted, they arrived safely in Kabala, a northern rural town in Sierra Leone. "One of the girls had malaria so we had to find medicine for her," Schmittgens said.

The direct and vicarious trauma affected Schmittgens. "It sticks with you," she said.

In retrospect, Schmittgens now recognizes that she was suffering classic symptoms of post-traumatic stress disorder. "I was snarly, angry and felt hopeless and needed to come home [to the U.S.]," she said.

Humility of Mary Sr. Toby Lardie spent more than eight years in La Libertad, El Salvador (1987-95), as a teacher of catechists. She was part of the Cleveland Latin American Mission. It was a time of civil war.

"Lots of people were being killed," Lardie said. "It was a lawless time. Soldiers would search convents, rectories looking for rebels."

Lardie described how soldiers killed some 40 people and would not allow the bodies to be collected and properly buried. Kids coming to school had to walk around the dead bodies.

In war zones, people make accommodations in order to survive.

"Since the bathroom walls were doubly reinforced, we would hide in there, but we also kept the backgammon game in the bathroom," Lardie said.

She was also exposed to vicarious trauma. "People would bring very sick people to the sisters instead of a hospital because they had no access to health care due to poverty," she said. "We would take kids on field trips and instead of playing in the park -- they would have to stay on the sidewalks because the grass fields had land mines."

"I loved my time in El Salvador," Lardie said. But it came at a price. Returning to the U.S. was very difficult.

Many returning missioners experience reverse cultural shock. The standard care plan for missioners is to be given a sabbatical and to attend a renewal program. Far too often trauma is not treated.

"There was no preparation for returning missioners," Lardie said. "Dr. Robert Grant's book, The Way of the Wound, saved my life. His book helped me to make sense of what I experienced and how I felt."

"As a seminarian and priest, I worked in communities and areas of the city where violent murders were a common occurrence, not to mention the violence of poverty and unemployment (or underemployment) where people suffer day-to-day, struggling to make ends meet for mere survival," he said. "I later realized that this witnessing of violence had a profound effect on me and I needed to do some work to help renegotiate this trauma in my life and allow it to be released from my nervous system."

Moorman had feelings of being extremely overwhelmed and vulnerable.

One common experience of missioners upon re-entry to the U.S. is a lack of understanding by peers, friends and family.

"Coming home is the hardest part for missioners," said Julie Lupien, executive director of From Mission to Mission, a re-entry support organization based in Longmont, Colo. "Missioners are not understood by the people they come home to because people can't relate to the missioner."

The organization's workshops, held throughout the U.S., "give missioners a safe place to spend time with their story and to honor that mission experience," Lupien said. In groups of 10 to 15 people, the missioners can speak at length about their experiences.

"The From Mission to Mission workshop was really significant to me," Schmittgens said. "People really listened. I know it made a difference."

"The From Mission to Mission program was an important experience to help me become aware of how trauma in mission had affected my life," Moorman said.

"After a workshop, the missioners are physically different as they walk out the door as compared to the way they walked in," Lupien said. "One of the privileges of working with missioners is that they love the people they serve."

For Moorman, trauma changed his life and his mission ministry in a unique way.

"Symptoms of trauma include a closing down of our body and nervous system which limits our openness to the possibilities of life," said Moorman. Somatic Experiencing uses techniques that "are natural to the human experience, to help expand the resiliency of the nervous system and help restore the body's own self-healing capacity."

Missioners, even those devastated by trauma, are special people.

"Missioners come back as prophets," Grant said. "They try to get leadership to make changes."

[Tom Gallagher writes the Mission Management column and is a member of NCR's board of directors. He also writes the "Gotta Believe" column for ArchetypeMe.com.]