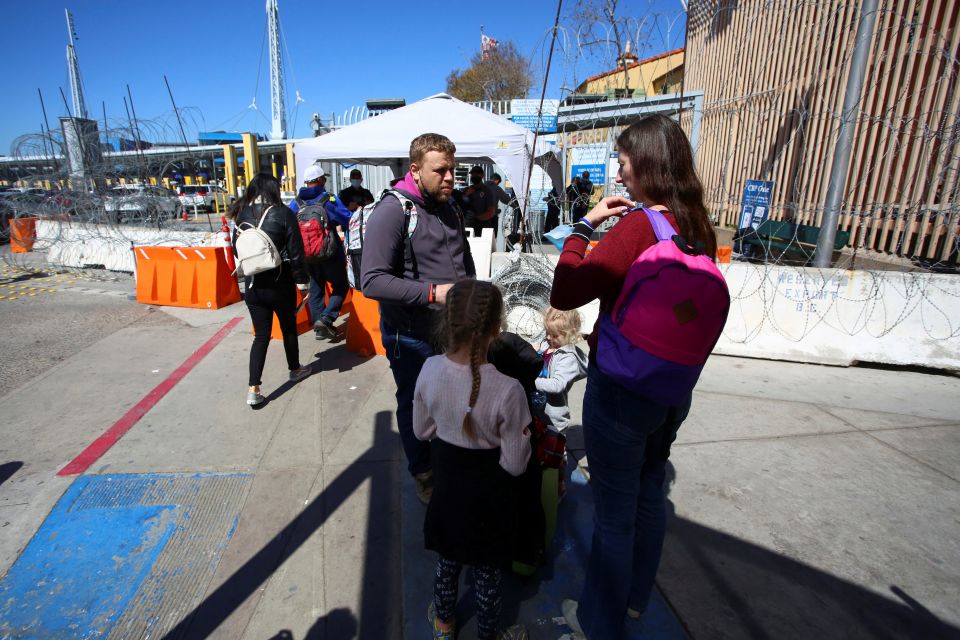 A Ukrainian family waits for a humanitarian visa outside the San Ysidro Port of Entry at the U.S.-Mexico border in Tijuana, Mexico March 11, 2022. (CNS photo/Jorge Duenes, Reuters)

WASHINGTON — A Ukrainian family who was repeatedly denied entry into the U.S. by Border Patrol agents at the U.S.-Mexico border was allowed entry March 10, bringing back debate about a public health measure that keeps migrants out.

News reports said border agents initially turned away a Ukrainian woman and her children based on a Trump-era measure called Title 42.

It is a provision of the U.S. public health law that Trump administration officials implemented to keep migrants out as COVID-19 infections began rising in the U.S. in 2020. But immigrant supporters have repeatedly pleaded with the Biden administration to lift the restriction, to no avail.

Biden administration officials have said they look to the Centers for Disease Control and Prevention for guidance since it's a health measure, not immigration policy. On March 12, the CDC said it was ending the measure for unaccompanied minors but not for adults.

When it came to the Ukrainian family, border agents allowed them in after an outcry from politicians.

President Joe Biden told a crowd gathered March 11 for the House Democratic Caucus Issues Conference: "We are going to welcome Ukrainian refugees with open arms if in fact they come all the way here."

But he didn't go into detail about how they would be allowed in or what that would mean for other migrants at the southern border who also want to be let in and aren't allowed because of different restrictions.

Since Russia's Feb. 24 attack on Ukraine, 2.5 million have fled the East European nation. A top United Nations official has called it the "fastest growing refugee crisis in Europe since World War II." There are no figures showing how many arrived at the U.S.-Mexico border after Russia's attacks.

The majority of Ukrainians have headed into neighboring countries such as Poland. The Ukrainian family allowed into the U.S., news reports said, fled via Moldova, then Romania, and then grabbed a flight to Mexico City. After that, they drove toward the U.S. southern border hoping to enter at a point of entry near California, to stay with family.

Reuters news agency reported in February that U.S. Customs and Border Protection began seeing an increase in Ukrainians at the southern border with Mexico asking the U.S. for asylum from October 2021 into January of this year. During that same period, Russians also began seeking asylum, with both groups citing political repression.

Catholic organizations have been among the most ardent critics of Title 42, which has remained in pace even as COVID-19 infection rates have drastically dropped in much of the country. Some critics have said it has more to do with immigration control than a public health threat.

The Catholic social justice lobby Network plans an early afternoon vigil to end Title 42 for all March 21 outside the CDC's Washington office.