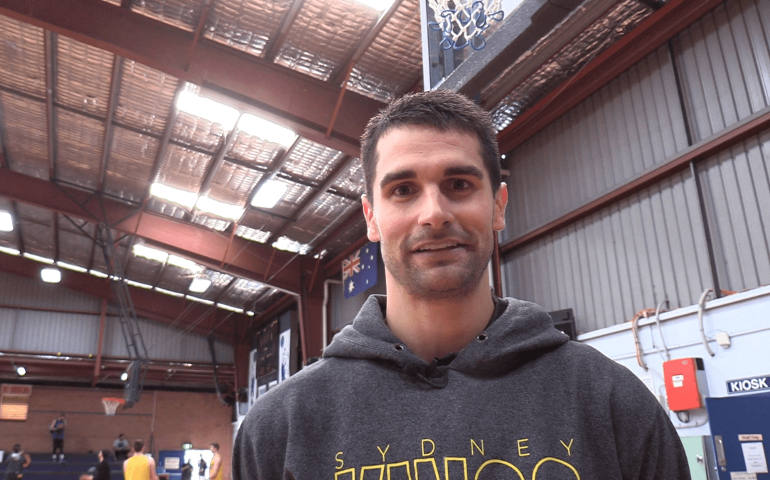 He played NCAA Division I ball at St. Louis University, was up for the NBA draft when he graduated in 2009, has won championships for pro teams in Spain, France and Australia and is heading to Rio de Janeiro to represent Australia, months after signing with the Sydney Kings and gaining his Australian citizenship.

But, Lisch said, God has always been at the center. People who know him confirm that.

"I tell you what," Lieb said in a phone interview, "as a player, Kevin epitomized everything. He's tough, a good sport, works hard, and on top of that he's a great player."

Lieb said Lisch was even better at school than he was at basketball, joining the student council and the National Honor Society. His faith, Lieb said, has always been important to him.

"You'll see him at daily Masses. If you want to catch up with Kevin when he's at home, you go to 8 o'clock Mass at St. Henry's," Lieb said. He's kept up with Lisch over the years, even after Lisch moved to Australia in 2009.

At St. Louis University, Lisch played under head coach Brad Soderberg while earning a bachelor's degree in marketing and an MBA in four years. Lisch averaged 14.1 points per game and was the Atlantic 10's Men's Basketball Student-Athlete of the Year as a senior.

Soderberg, who has coached college basketball for 30 years, said, "Kevin ranks as one of the top two or three guys I've ever coached when combining his athletic ability and character. He was a tremendous college player because of his relentless work ethic, competitive zeal and unmatched toughness.

"His honesty, humility and kind heart were unmatched by any other player I've coached."

Soderberg, a Catholic, recalled how he was struck by Lisch's devotion to his faith.

"I recall one day, I was preparing for a noon weekday Mass at the university church. I looked up from my prayer and saw Kevin standing quietly in the confessional line. That's not something a college basketball coach sees very often," Soderberg said.

After graduating, Lisch went undrafted in 2009 and signed on with the Perth Wildcats in Australia's National Basketball League. Perth won the NBL championship in his first year. Lisch won two MVP awards in his two seasons there, then played for Puerto Rico's Piratas de Quebradillas, where he won another league championship.

He played in Paris for Nanterre 92, winning the French Cup in 2014, then moved to Spain to play for the Illawarra Hawks through this year. He returned to Puerto Rico for a brief stint in February, then signed with the Sydney Kings in April before being named to the Australian national team, known as the Boomers, competing in Rio. In March, he gained his Australian citizenship, according to his hometown Belleville News-Democrat newspaper.

In an email to CNS from South America, where he was playing pre-Olympic games, Lisch reflected on how his faith and his sport interact.

"In sports, as well as in other things in life, it is easy to get caught up in yourself and your own problems or achievements. But by putting God at the center, I am reminded that this is more than about me. It's about helping others. It's about spreading that joy to others of living a Christian life," Lisch wrote.

"My faith has helped to give me a purpose and perspective in sports and life. It is a constant work in progress, a happy struggle, I think."