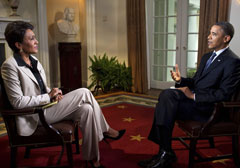 President Barack Obama speaks to Robin Roberts of ABC's "Good Morning America" at the White House May 9. During the interview Obama said he believes same-sex couples should be allowed to marry. (CNS/Reuters/Courtesy of the White House/Pete Souza)

Americans’ position on same-sex marriage is like their president’s: It’s evolving.

Back in 2010, President Barack Obama said his views on same-sex marriage were “evolving” and that he “struggles with this,” adding he would continue thinking about the issue. In a May 9 interview this year with ABC News, Obama said that, after several years of deliberation, he thought same-sex couples “should be able to get married.”

An Associated Press story May 10 quoted Obama as saying he wanted to announce his support for such unions “in my own way, on my own terms” but acknowledged that earlier remarks by Vice President Joe Biden prompted his announcement.

On May 6, Biden, a Catholic, said he was “absolutely comfortable” with same-sex couples marrying, adding they should get “the same exact rights” heterosexual married couples receive. Education Secretary Arne Duncan voiced his support the next day.

The Catholic church upholds the sanctity of traditional marriage as being only between one man and one woman, and also teaches that any sexual activity outside of marriage is sinful.

Some Americans have changed their views over the years as well. According to polls conducted over the past five years by Gallup, ABC-The Washington Post, NBC-The Wall Street Journal, CNN-Opinion Research Center and the Pew Research Center, public support for same-sex marriage has risen from 40 percent in 2006 to majority support today.

Support among Catholics in the pew seems to be in the majority as well. A March poll conducted jointly by the Public Religion Research Institute and Religion News Service found overall Catholic support for same-sex marriage to be 59 percent, with 36 percent of Catholics opposed. Support by Americans overall is at 52 percent, with 44 percent opposed. Among white Catholics, 57 percent support same-sex marriage and 37 percent oppose it.

The demographic groups that showed majority opposition to same-sex marriage were respondents age 65 and up, white evangelicals, Republicans, African-Americans, and those with a high school education or less.

“The Catholic Bishops stand ready to affirm every positive measure taken by the President and the Administration to strengthen marriage and the family. However, we cannot be silent in the face of words or actions that would undermine the institution of marriage, the very cornerstone of our society. … I pray for the President every day, and will continue to pray that he and his Administration act justly to uphold and protect marriage as the union of one man and one woman. May we all work to promote and protect marriage and by so doing serve the true good of all persons.”

Catholics in other areas, such as Steve Krueger, national director of Catholic Democrats, applauded the president’s “evolution.”

“He spoke about the Golden Rule and what he has learned from the breadth of perspective that can only be measured by the differences between the innocence of one’s own child and the responsibilities of our nation’s soldiers,” Krueger said.

He added that it’s understandable how the president and vice president’s views could change, “as it continues to change for our society.” 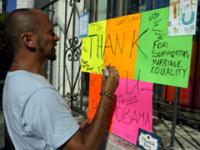 “And I think that a preponderance of Catholics will understand how this can happen, particularly for those who have relationships with members of the LGBT community.”

Obama’s endorsement of same-sex marriage opened a torrent of speculation on what his newly enunciated position will mean politically, but the latest polls indicate the public largely backs his views and that his stance may not hurt him at the ballot box.

Just the day before Obama’s announcement, North Carolina became the 31st state and final Southern state to amend its constitution to ban same-sex marriage. Campaigns by religious groups supporting the ban were instrumental in the victory, organizers said.

With about 2.1 million votes cast, about 34 percent of the state’s registered voters, the amendment, which says that “marriage between one man and one woman is the only domestic legal union that shall be valid or recognized,” was approved by a 61 percent to 39 percent margin.

The victory was celebrated by both of the state’s Catholic bishops, Peter J. Jugis of Charlotte and Michael F. Burbidge of Raleigh, who strongly backed the ban despite the fact same-sex marriage is already illegal in the state.

Bishop Salvatore J. Cordileone of Oakland, Calif., chairman of the U.S. bishops’ Subcommittee for the Promotion and Defense of Marriage, praised North Carolina voters, saying the amendment’s passage “demonstrates people’s awareness of the essential role that marriage, as the union of a man and a woman, plays for the common good.”

Meanwhile in Colorado, legislation that would have permitted civil unions in the state died without a vote May 8. But two days later Gov. John Hickenlooper signed an order calling for a special session asking lawmakers to take up several issues left unfinished, including the measure on civil unions.

The Colorado Catholic Conference issued a statement May 10 expressing its disappointment with Hickenlooper’s decision, citing the fact that Colorado voters had already spoken by passing a referendum in 2006 to “uphold traditional marriage between one man and one woman.”

Speaking to Matthew DeLuca of the website The Daily Beast, Paul Lakeland, director of the Center for Catholic Studies at Fairfield University in Connecticut, said that the bishops’ opposition to same-sex marriage is “not really an argument that has a theological justification,” and that “it’s an argument that’s based more on fear or repugnance.”

“If the church would just stay away from the issue of civil marriage, that would be something,” Lakeland said. “As far as civil marriage is concerned, what the church should be saying is, ‘It’s none of our business.’ ”

In an essay last year for NCR, Nicholas Cafardi, a civil and canon lawyer and a professor at Duquesne University School of Law in Pittsburgh, argued to leave civil marriage up to the state and sacramental marriage up to the church, something he still agrees with today.

“Civil marriage is a social construct,” he said. “It is whatever society decides it is.”

Equally Blessed, a coalition of four Catholic groups who work on behalf of equality for lesbian, gay, bisexual and transgender people in the church and wider society, saluted Obama’s change in opinion.

“Like the President, our support for same-sex marriage is rooted in Christian conviction. We believe that all of God’s children are entitled to equal treatment under the law,” the coalition said in a statement.

A year into presidency, criticism over immigration continues for Biden