Rome — The decision by organizers of an annual Vatican-hosted women's storytelling event to acknowledge a struggle to gain hierarchical approval of their planned speakers for 2018 appears to represent a significant change of approach for how best to highlight issues of inequality in the church.

Voices of Faith, a series of featured speakers and panel discussions, has taken a notably careful tack in the past. While the livestreamed celebration of International Women's Day, first held in 2014, has occasionally touched on issues of exclusion inside the church, words like "ordination" and "sexism" have been largely avoided.

In earlier interviews, organizers have even stressed a desire to refrain from criticizing the Vatican as part of a strategy for carefully and quietly urging church leaders to change through gradual building of relationships.

But now the group has blasted the Vatican for reportedly withholding permission for three of its 2018 speakers, including former Irish president Mary McAleese.

Chantal Götz, the main organizer of the event, told The Irish Independent newspaper that the constraint on speakers was "unacceptable" and caused organizers to choose to leave the Vatican for the first time for this year's March 8 event in favor of the nearby headquarters of the Jesuit order.

Other organizers and participants described the decision on the speakers, reported to have been made by Irish-American Cardinal Kevin Farrell, as a sort of breaking point, necessitating a change from Voices of Faith's earlier strategy.

Tina Beattie, a noted British theologian who is to moderate a panel at the upcoming event, said the decision to go public about the issue was "precipitated" by McAleese. She said Götz preferred to avoid publicity "but now that it’s happening she’s willing to stand up and defend her position." 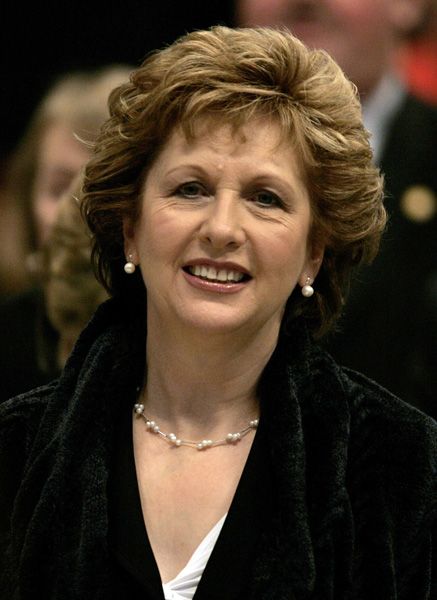 Beattie, professor of Catholic Studies at the University of Roehampton in London, also noted that while the group had each year invited Vatican officials to take part in their event few had ever come.

"After several years of being ignored despite repeated invitations to the pope and other cardinals and despite trying to avoid any suggestion of criticism or challenge, I think [Götz] decided the time had come to change tactics," she said.

Astrid Lobo Gajiwala, an advisor to the Indian bishops' conference who serves as a consultant to Voices of Faith, said the group had become frustrated by what she called the church's "doublespeak -- asking for all voices to be heard and then censoring some."

"We chose our speakers for what they had to say, even if it meant the doors of the Vatican would forever after be closed to us," she said. "We chose our integrity as women. We were not willing to compromise what we believed in, that the event is for the voices of all women."

Neither Farrell nor Götz responded to requests for comment for this story.

Several sources with knowledge of the discussions between Voices of Faith and the Vatican said the issue of the speakers for the 2018 event was complicated by the fact that the Casino Pio IV, an iconic marble building home to the Pontifical Academy of Sciences that has hosted the event since 2015, was unavailable this March 8.

The sources, who each asked not to be named because of the sensitivity of the matter, also said that one of the Vatican's only other facilities with the technological capability to host a livestreamed and translated event was unavailable due to renovations.

Voices of Faith, now in its fifth year, is financially backed by a five-year grant from the Liechtenstein-based charitable trust Fidel Götz Foundation, of which Chantal Götz is the executive director.

Voices of Faith's earlier strategy of building relationships with Vatican officials had led Götz to try to tightly control how media outlets covered the annual event.

After an NCR article in anticipation of the 2015 iteration, Götz wrote to express concern that the piece mentioned the background of one of that year's speakers: Lesley-Anne Knight, a Zimbabwe-born laywoman who led Caritas Internationalis until 2011, when the Vatican did not renew her four-year term at the helm of the international network of Catholic relief and development agencies.

"I just have to be very careful regarding the Vatican and the way we go forward," Götz wrote at the time. "I want to have them in the boat."

"If we criticize we follow the same line [as] anyone else," she said. "Mentioning for example Lesley Anne and her firing will do us harm in our strategy."

The annual event has likewise been careful most years to avoid the issue of women's ordination. One exception came in 2015, when participants in a panel discussion openly spoke about the limits of women's involvement in the church. Both Gajiwala and Beattie were part of that panel and mentioned the absence of women in decision-making roles.

In following years, however, Voices of Faith has skirted the subject of ordination.

At the 2016 iteration, former Catholic Relief Services president Carolyn Woo called focus of conversations about women's roles in the church around questions of ordination "unfortunate," saying it causes suspicion when any issue relating to women is raised in church circles.

Voices of Faith this year is taking the theme "Why Women Matter." Advertisements now feature McAleese as offering the conference's opening remarks on the subject "Time is now for change in the Catholic Church."

Among others set to speak are: Ssenfuka Joanita Warry, a Catholic who campaigns for LGBT rights in Uganda; Zuzanna Radzik, an outspoken Polish theologian, and Joana Gomes, project director for Jesuit Refugee Services in Chad.

Nicole Sotelo, an NCR contributor, is to take part in a panel discussion.

A version of this story appeared in the Feb 23-March 8, 2018 print issue under the headline: Vatican rejects three women speakers from Voices of Faith conference .