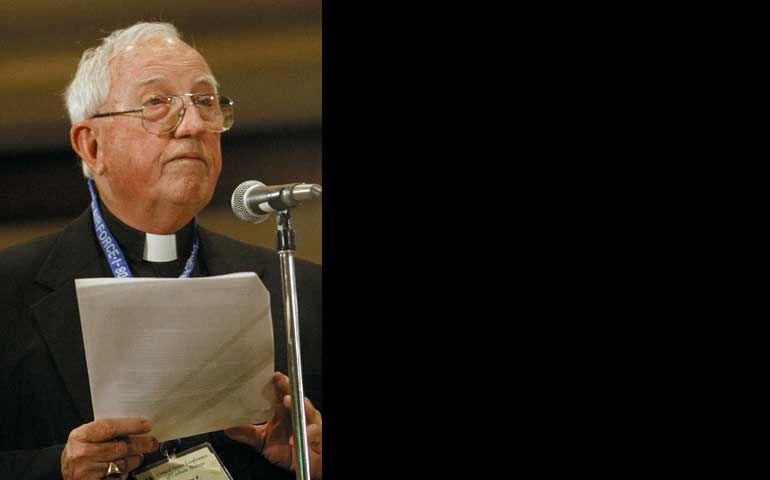 One of the celebrated "Jadot bishops," meaning progressive American prelates appointed under Pope Paul VI during the 1970s, Walter Sullivan led the Richmond, Va., diocese for almost 30 years, and from that perch became one of the country's premier "peace bishops," denouncing armed conflict from Vietnam and the Cold War all the way up to Iraq.

"He just could not reconcile war and Christianity," said Phyllis Theroux, a Virginia-based author whose biography of Sullivan, The Good Bishop, is scheduled to appear from Orbis Books in May.

"He once said that as far as I'm concerned, you can take the whole 'just war' tradition and stick it in a drawer and lock it up," she said, adding that Sullivan believed the idea of a just war had been "abused" by both clergy and politicians.

Bishop Walter Sullivan died Tuesday* as a result of an inoperable liver cancer after he returned to his Richmond home from a local hospital. He was 84.

Sullivan was also known as a leader in ecumenism and interfaith dialogue, once funding the launch of a Holocaust museum in Virginia out of his own pocket. He spoke out on behalf of the poor, both in his own Appalachian region and around the world. Among other things, he encouraged Richmond Catholics to take a special interest in Haiti, where today, the "Bishop Walter Sullivan Mission House" in Jacsonville, in the country's north, serves as a residence for volunteers.

On the basis of that legacy, Sullivan will be remembered as "a happy and tireless warrior for justice and peace," said retired Archbishop Joseph Fiorenza of Houston, a former president of the U.S. bishops' conference.

"He truly believed in the priesthood of the laity and their essential role in the life and mission of the church," Fiorenza told NCR.

Jesuit Fr. Thomas Reese, a longtime observer of the Catholic scene in the country, concurred.

"It would be hard to find anyone like Sullivan in the American hierarchy today," Reese said. "He was a liberal bishop passionately committed to social justice and peace."

Over the years, his liberal reputation occasionally landed Sullivan in hot water. During the 1980s, he faced a Vatican investigation in response to complaints about various doctrinal and liturgical abuses. (According to reports at the time, the charges included a rumor that one of Sullivan's priests celebrated Mass wearing Bermuda shorts under his cassock.)

The investigation did not lead to disciplinary action, though it never produced a formal exoneration either.

Near the end of his tenure, Sullivan also drew fire for his handling of the sex abuse crisis, especially a 2002 case in which he reinstated an accused priest without consulting his own advisory panel. Four members resigned in protest.

Yet Sullivan also took a forceful position in favor of reform.

"Sexual abuse of a minor is a rape, pure and simple," Sullivan said in a 2002 interview. "A person should be accountable to the law, not just to the church. I told our priests 15 years ago that if they committed such actions, I'd be happy to visit them in prison."

A Washington, D.C., native, Sullivan studied at St. Charles College and St. Mary's Seminary in Baltimore and was ordained a priest for the Richmond diocese in 1953. He served in a variety of roles before being named an auxiliary bishop of Richmond in 1970. He took over the diocese in 1974.

Over the years, Sullivan served as the bishop president of Pax Christi USA as well as president of the Churches' Center for Theology and Public Policy, an ecumenical body that promotes interfaith dialogue.

Early on, it was clear Sullivan would be an activist. Andrew Chesnut, who holds the "Bishop Walter Sullivan Chair" at Virginia Commonwealth, recalled that at the height of the Vietnam War, Sullivan encouraged young men in Richmond to burn their draft cards.

"This was the old capital of the Confederacy," Chesnut said. "It was a pretty bold position to take."

During the 1980s, he protested against the Reagan administration's policies in Central America as well as the Cold War and its reliance on nuclear mutually assured destruction. More recently, he was an outspoken opponent of the two U.S.-led invasions of Iraq.

Sullivan was also known as a champion of the poor, focusing especially on the chronic underdevelopment of Virginia's Appalachian region. Glenmary Fr. John Rausch, an environmental and social justice activist in the area, said Sullivan's death marks "the end of a certain Catholic era in Appalachia."

Sullivan, Rausch noted, was the last surviving bishop who signed two celebrated pastoral letters on poverty and sustainability from the Catholic prelates of the region, one in 1975 and another in 1995.

"He was the bishop most faithful to a collaborative model of ministry in the mountains, promoting social ministry when others retreated to the security of institutional concerns," Rausch said.

Theroux said Sullivan's sympathy for the "dispossessed of any kind" reflected his own biography. He grew up, she said, in a heavily Catholic neighborhood in Washington, D.C., where divorce was still taboo. When his parents' marriage fell apart, she said, Sullivan "could feel that cloak of disapproval."

Among other snubs, Theroux said, Sullivan's sister was told she couldn't wear white at her own wedding because of her parents' divorce, and Sullivan himself was informed he wouldn't get any financial help from the diocese for his seminary studies. (A women's sodality helped defray his costs.)

As a result, Theroux said, Sullivan was a bishop with "open arms, very nonjudgmental, and people flourished under that."

On the personal level, admirers described Sullivan as affable and unpretentious, equally at home discussing military policy or the latest basketball game played by Virginia Commonwealth. (The university wraps around the cathedral in Richmond.)

Sullivan's common touch was also reflected in his love for his schnauzers, dogs he referred to as his "children."

"He was everyone's bishop, comfortable both in the halls of power in the legislature and hanging out with grassroots parishioners," Chesnut said.

Although Sullivan stepped down in 2003, he wasn't forgotten in Richmond. On Sunday, a crowd of 400 locals packed his backyard to serenade the dying bishop, singing his favorite hymn, "Sweet, Sweet Spirit."

Carol Negrus, who got to know Sullivan from his work with local nonprofits, was among those on hand.

"His love of people just radiated through everything he did," Negrus said. "There never was a person who, once they knew him, didn't love him."

*An earlier version of this story gave the incorrect day.