We all have some unlearning to do 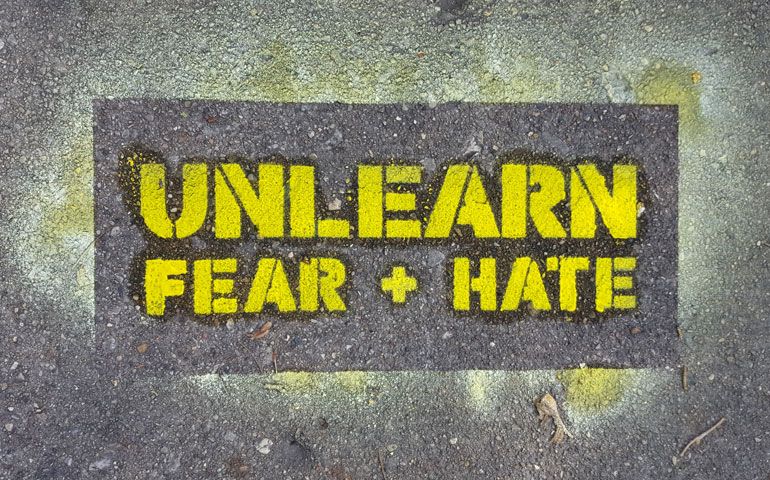 The stenciled words “Unlearn Fear + Hate” are part of an international community art project. (Courtesy of Aaron Doolittle and Jordan Hampton)
This article appears in the Transition to Trump feature series. View the full series.

The morning after the presidential election, still in shock, I delivered the news to our children. The candidate who spoke about people who are different in ways not allowed in our home had actually won. We talked about how we didn’t share his values, and that we could still work for the things we believed in.

Then we grabbed a few cans of chalk spray paint, which is not permanent, and headed outside. By spray painting the stenciled words “Unlearn Fear + Hate” on our steps and sidewalk, we joined an international community art project trying to promote public dialogue and civic engagement.

The words come from Frank X. Walker’s poem “Love Letter to the World,” written for another community art project by two Lexington, Ky., professors, Kurt Gohde and Kremena Todorova (disclosure: the latter is my sister-in-law).

Their “Unlearn Fear + Hate” project is “based on our belief that fear and hate are behaviors we have learned, that they are not our natural state, that they can, therefore, be unlearned,” according to the project’s Facebook page, which has more than 1,200 members and is growing daily.

In fact, more than 100 people joined the group the day after the election, compared to one to two per day before. “It’s very obvious that people were looking for ways to respond that felt healing and positive,” said Todorova, who teaches English at Transylvania University.

But can something so small really fight injustice? The artists believe so. In fact, little things may be even more effective than larger actions, such as protests or boycotts, they say.

Such projects “can change hearts and minds more than ways that are more confrontational because it’s a softer entry for people,” explains Gohde, professor of art at Transylvania. For the past 10 years, the two have taught a course on “Community Engagement Through the Arts” at the university, where they involve students in similar projects.

Gohde believes community art is more like a movement than an art piece. “Work like this has the ability to reach people because it’s something they’re engaged in before they even know it’s art,” he said. “They don’t put up the intellectual walls they would if they were to go to a museum.”

Their past projects have involved photographs of discarded furniture and portions of poems tattooed on individuals. The “Unlearn Fear + Hate” project grew out of a controversy in Lexington about two Confederate statues in a public square that had been a slave market. It also was a response to racial violence around the country.

Todorova and Gohde designed a 4-foot-wide stainless steel halo featuring the four words, which is attached to a wall across from the statues. Residents take a portrait with the artwork and post it on social media to show their commitment to replacing fear and prejudice with compassion and justice. Interestingly, people with different views about the Confederate statues have posed with the halo, Todorova said.

Others have spray-painted the words with a stencil designed by the artists, or even cross-stitched them on fabric. The two professors also have taken the show on the road, speaking at schools, community gatherings and churches -- where they sometimes help create a 60-foot-long version of the stenciled design. So far, participants hail from five states as well as Thailand, Australia, Turkey, South Africa and Bulgaria.

For Todorova, who converted to Catholicism while in graduate school at the University of Notre Dame, community art like “Unlearn Fear + Hate” is part of a commitment to social justice that is part of her faith life.

“It’s tempting to be hateful,” she admitted. “The day after the election, [the project] offered a reminder that I should try to understand people who voted very differently than I. I don’t imagine that this artwork is going to change our society overnight. But it gives me hope. I really believe this can lead to positive change.”

As my 7- and 9-year-olds chose their paint colors and helped with the spraying, I thought about the high school students -- many of them immigrants from Latin America or the Middle East -- who walk the sidewalk in front of our house to school every day. I hoped the words might calm some of their fears. One neighbor told me the pink, yellow and white words cheered him on a day when he felt overwhelmed by the election results.

But in the end, what I thought was a message for others was really for me. I’m frankly terrified by the words and actions of the president-elect -- and some of his supporters. But I refuse to let fear fester into hate. In case I forget, the words on my front step will remind me.

On the Web
Individuals interest in joining the "Unlearn Fear + Hate" project can contact Kremena Todorova and Kurt Gohde at www.facebook.com/groups/unlearnfearandhate.

Column | We all have some unlearning to do