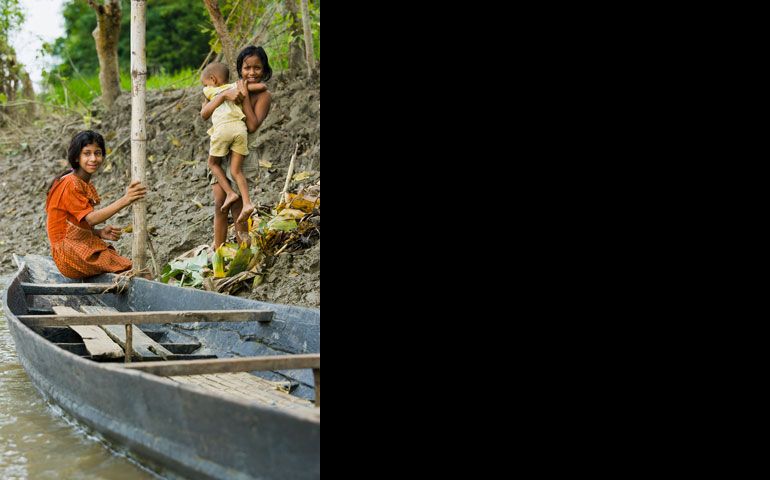 For many years, Maryknoll Fr. Bob McCahill has been sending an annual letter to friends at Christmastime, chronicling his experience living among the people of Bangladesh. Since 1984, NCR has published his letter every year in the Christmas issue. Following is an edited version of his 2013 letter.

During a visit to one of the 10 towns I have lived in in Bangladesh, I was walking on a side street when the face of a young man coming toward me lit up with astonishment. "Do you know who I am?" he asked. I did not. "I am Razzak," he said before adding with a big smile: "The queen's boy!" Then I remembered. Razzak had been a perilously emaciated child whom I took, along with his mother, to Save the Children Nutrition Unit in Dhaka in the mid-'80s. There, Razzak recovered and blossomed. When a member of the English royal family visited Dhaka, she paid special attention to the shriveled boy. Afterward, the staff dubbed Razzak "the queen's boy." Now, 28 years later, Razzak is a fine-looking clerk in a shop. I do not know which one of us was more delighted by our chance encounter. Ordinarily, I never see again the children I have been privileged to help.

At the beginning of the year, a seminarian spent some weeks with me. One morning, Kevin and I bicycled to a distant village, intending to arrange with parents the hospitalization of their child. However, the child was no longer there. His father had vacated their village home and taken the family elsewhere in search of work. The child's need for professional treatment was dwarfed by the family's need for food.

Months earlier, Bishop Bejoy D'Cruze had sent me an invitation: "Come spend some years in my diocese." Eight months later, we met to iron out the details. Thus, at the beginning of May, I -- with no little assist from the Lord -- inserted myself in Hobiganj district of Sylhet diocese. The bishop appreciates this missionary approach to Muslims and Hindus. "First comes the witness of Christian living, the witness of practical love," he affirms with enthusiasm.

During my first days in Hobiganj town, I walked and talked -- that is, walked up and down the mile-long main street and spoke with all who looked like they wanted to converse. At a bookstore, a lady teacher, hearing of my need to find a room, suggested I see the headmaster of the Government High School just across the street. Headmaster Gaffar was sympathetic and offered me a teacher's room on campus for "up to four months duration." Through Gaffar, God was clearly intervening in my quest for shelter in the crowded town.

In village Tetuia, Tanvir's grandfather Rajob Ali was so happy to receive his 7-month-old grandson home after surgery that he wanted to reward me. Rajob offered me fresh milk and went through the motions of milking the family's cow to make it clear to me the milk would be unadulterated. However, not even his pantomime convinced me to accept warm milk fresh from the udder, especially because many cows in Bangladesh suffer from tuberculosis or worms infestation. I thanked him for the kind offer and explained why I stopped drinking milk at age 18: because my bones were already strong by then.

During Ramadan, the Islamic month of fasting, Mamoon invited me into his home. When he and his wife started to prepare a snack for me, I reminded him I was keeping the fast with them. His mouth fell open in surprise. "You are a Christian and you are fasting with us?" Mamoon threw his arms around me. "You are doing so much for us!" Mamoon credited me with doing good for all Muslims by keeping the fast with him. Solidarity.

Hamid, the wiry retired gateman of the high school, always asks me whether or not I have eaten. That is the normal way for Bengalis to show regard for their partners in conversation. I had just eaten supper, so I itemized for Hamid what I had eaten: rice, vegetable curry, lentil soup, and cucumber. He smiled upon hearing the familiar names: "We eat, we live, we die, all according to the time Allah has fixed for us," Hamid commented. He knows there is more to life than eating. Even so, he enjoys hearing precisely what I ate -- even if they are always the same four items.

As I crossed a bridge to catch a bus, Parul, an officer for a nongovernmental organization, was also crossing on the way to her village office. She is a quite pretty woman and wears an Islamic veil that leaves her face uncovered. "What is his relationship to you?" the conductor of our bus asked Parul when she paid both our fares. "He is my grandfather," she smiled back. Friends have told me how cool it is to have grandchildren. I know the feeling.

When I prepared to bicycle away from the library, a collegian was waiting for me on the path. "I wish to converse with you," he began. "I like what you do. I also would like to serve the people." Not much more was said. Urging him to continue focusing on ways by which he could be even more useful to others, I called on the Best Giver to bless the young man.

People | We are all one family: meeting old friends and new in Bangladesh

'No matter where you are from, we're glad you're our neighbor.'