What I learned from Fr. Ted Hesburgh 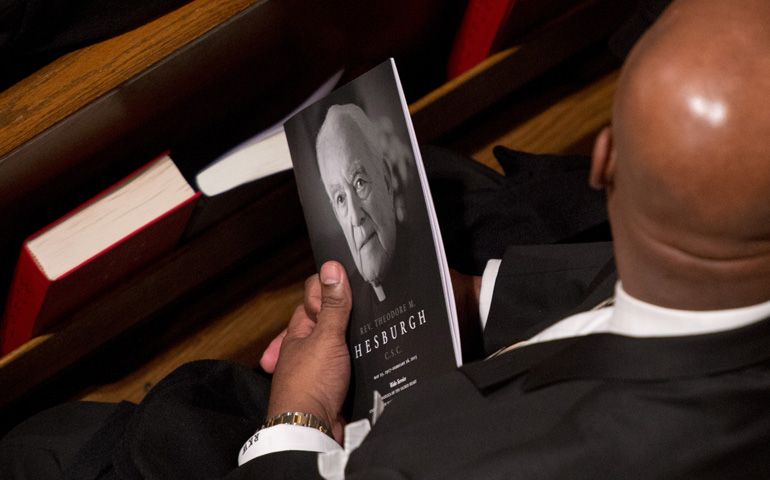 Before moving to Wake Forest 10 years ago, I was privileged for many years to teach and work in the administration of Notre Dame -- and I had the privilege of knowing Holy Cross Fr. Ted Hesburgh. He was as close to a saint as anyone I have ever known, mostly because in his person he held in creative tension virtues that few people can keep intact. He was able to capture something powerful and elusive -- like lightning in a bottle -- and then show it to the world.

He strived for greatness and despised mediocrity, yet he lived day-to-day as a person who took everyone seriously. When I began as greenhorn assistant professor of history in the mid-1970s, Father Ted was a global figure, a man of monumental accomplishment, one of the most admired Americans of his day. At his annual dinner to honor faculty each spring, we learned how he had counseled presidents, shaped national policy, engaged the Vatican, and flown the world over addressing major international issues such as poverty and refugees. His accomplishments were stunning, intimidating for any young faculty member hearing of such exploits.

Father Ted was a commanding presence and moved with great ease in the highest circles. If he had not become a priest, I am sure he would have been a senator from New York or the CEO of Chase Manhattan, whose chairman, David Rockefeller, sought out Father Ted to become a Chase board member. After seeing Father Ted at a reception at the University of Chicago, the historian Jaroslav Pelikan told me no one worked a room as well as Father Ted.

But my personal encounters with him were so very different. To drop by his office in the library at Notre Dame that bears his name, one did not encounter someone who was high and mighty.

He was warm, gracious, remembered who you were, and always asked interesting questions about your own work or about your family.

He never seemed to doubt who he was and was thus free to relate to people as they were -- no condescension, no putting on airs. I will never forget how twice, when my wife, Julie, was pregnant, he made a special effort to bless mother and child. We were not Catholic, but he always embraced us and made us feel welcome. It was as if he forgot his status and took seriously the injunction that everyone is worthy of attention.

That is a gift rarely practiced by those who strive to make it to the top. I hope that my own treatment of everyone throughout my own university can reflect this generous spirit.

Father Ted was a person of deep conviction who always extended his arms in hospitality. He relished the fact that Notre Dame was a very Catholic place, but he insisted that Notre Dame be a crossroads and that the university lavish hospitality on its guests. The only time I ever heard Father Ted chide those of us in the administration was when we would stay to ourselves and not actively engage visitors.

I recall an occasion when we were dedicating a new library collection in medieval studies. Father Ted was celebrating Mass for the donor's family, which included several Jewish relatives. Father Ted offered the warmest welcome to all, noting the different traditions in the room, explaining: "You will have to excuse us. Here at Notre Dame, this [the Mass] is the only way we know how to do it."

This man of conviction also knew how to turn the other cheek. Once, during the 1980s, when Father Ted supported the Sullivan Principles on engagement with South Africa, he was criticized stridently by a faculty member whose own career Father Ted had gone out of his way to advance. But, true to form, he never responded in kind. He was not one to keep score or punish his antagonists.

Father Ted combined strong conviction with grace and generosity to all, even his public accusers. That combination is a strength desperately needed in our polarized culture. Can we be civil and generous to those with whom we disagree?

In a similar vein, Father Ted could not be put in a conservative or liberal box. He clung to virtues on both sides of many modern debates. He was a huge champion of ROTC at Notre Dame and, at the same time, he championed peace studies and convinced Joan Kroc to endow magnificently the Kroc Institute for International Peace Studies. He was friend of the Rockefeller brothers and of Martin Luther King Jr., confidant of Republican and Democratic presidents, champion of the Catholic character of a place like Notre Dame and of intellectual freedom and institutional independence. Like Pope Francis, Father Ted never questioned the core traditions of the church, yet he never seemed defensive or resistant to fresh ways of thinking.

I admire that studied independence, his refusal to let the categories of others define the limits of his own convictions.

The greatest circle that he squared was his undying optimism that a great Catholic university could and should be built. When he became president of Notre Dame in 1952, it was a place that had made its mark as a football power but showed little academic promise and scant financial backing.

But Father Ted had an audacious and contagious dream, one that he never seemed to doubt and one that transcended financial scarcity, fierce internal debate, and the skepticism of the secular academic establishment. That dream was that a great Catholic university could prosper in America, one that was fully a part of the American education establishment and fully faithful to Catholic traditions. Father Ted exemplified that dream, whether interacting with university presidents like Kingman Brewster Jr., Clark Kerr and Derek Bok or explaining to Pope Paul VI why the assets of Notre Dame, which had been owned by the church, should be transferred to a predominantly lay board of control -- one that was independent of formal church control.

Father Ted's dream sprang from an idea that the laity of the church should be empowered. That had been the subject of his doctoral dissertation in theology, and he worked with might and mien to put the idea into practice. He dreamed of independent Catholic universities still graced by religious orders but able to unleash the energy, resources, and expertise of lay Catholics.

His dream was to give power to others, not retain it for himself. I trust that same spirit can mark some of my own leadership. I also hope that the institutional dreams that I cherish can be an enduring north star like they were for Father Ted. He seemed never demurred by setback, by momentary failure, by internal disagreement, by external criticism. He had a grand dream, which guided his life, kept him focused, and inspired many privileged to know him.

When Father Ted became president of Notre Dame, its endowment was $9 million. Today, it has grown thousandfold to some $9 billion. More importantly, these assets have been employed to build a university of enormous range and academic capacity -- and one that is unmistakably Catholic. Catholics and non-Catholics alike are attracted to such a community, where religion is taken seriously and is studied and practiced intelligently.

Many Catholics, some at Notre Dame, are critical that Father Ted gave away too much to the modern, secular academic establishment. My own view is that his dream, exemplified at Notre Dame and at many other wonderful Catholic colleges and universities, has been enormously successful. In a world that seems more radically secular and more radically religious at the same time, his vision of Catholic higher education has never held more promise.

Higher education today needs dreamers, not plodders. May those of us privileged to lead colleges and universities lift our sights and renew a capacity to dream in the generous spirit of Father Ted.

[Nathan O. Hatch is president of Wake Forest University in Winston-Salem, N.C. In 1975, he joined the faculty at the University of Notre Dame. He was named provost, the university's second-highest-ranking position, in 1996. His three children all graduated from Notre Dame.]

People | What I learned from Fr. Ted Hesburgh

Philadelphia meeting, synods will be part of global debate on families