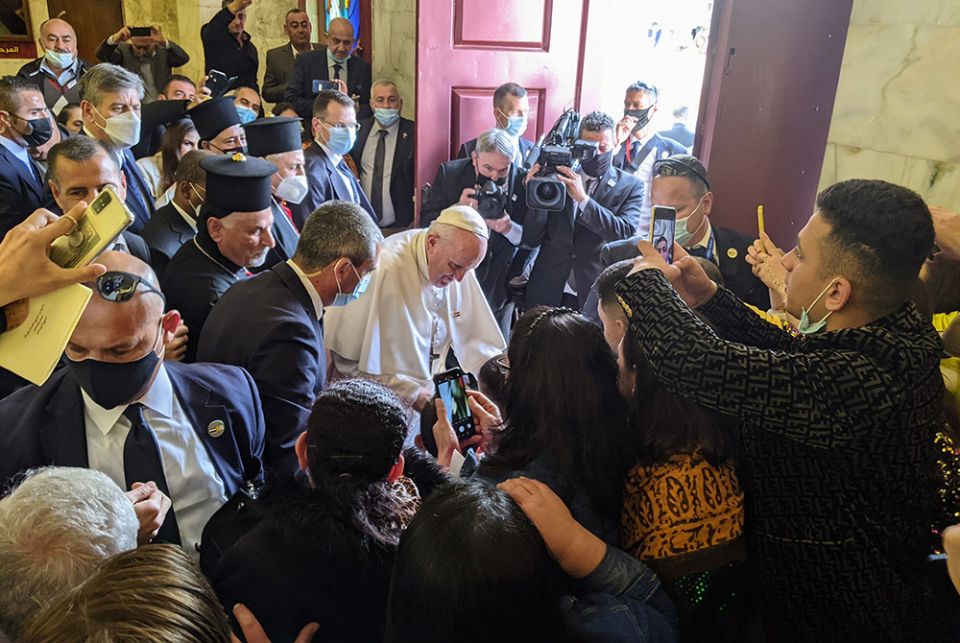 Pope Francis blesses a child amid a crowd of local Syriacs March 7 at the Church of the Immaculate Conception in Qaraqosh, the largest Catholic Church in Iraq. (Xavier Bisits)

At a glance, Qaraqosh and Bartella are similar: ancient, Aramaic-speaking towns first evangelized by St. Thomas. In 2014, both were majority Christian towns before the population was displaced, enslaved or killed by ISIS. Both lie only 20 minutes away from Mosul, where ISIS declared its caliphate in 2014.

That, however, is where the similarities end. One of these towns has kept Muslims out, and the other has not. With fraternity at the heart of Pope Francis' trip to Iraq, the question that Iraqi Christians are asking themselves strikes at the core of Christianity: Who is my neighbor?

Pope Francis had his most enthusiastic reception in Qaraqosh, Iraq's de facto Catholic capital. Addressing the crowd in a restored church that had been burned by ISIS, he told attendees: "As I look out at you, I can see the cultural and religious diversity of the people of Qaraqosh." 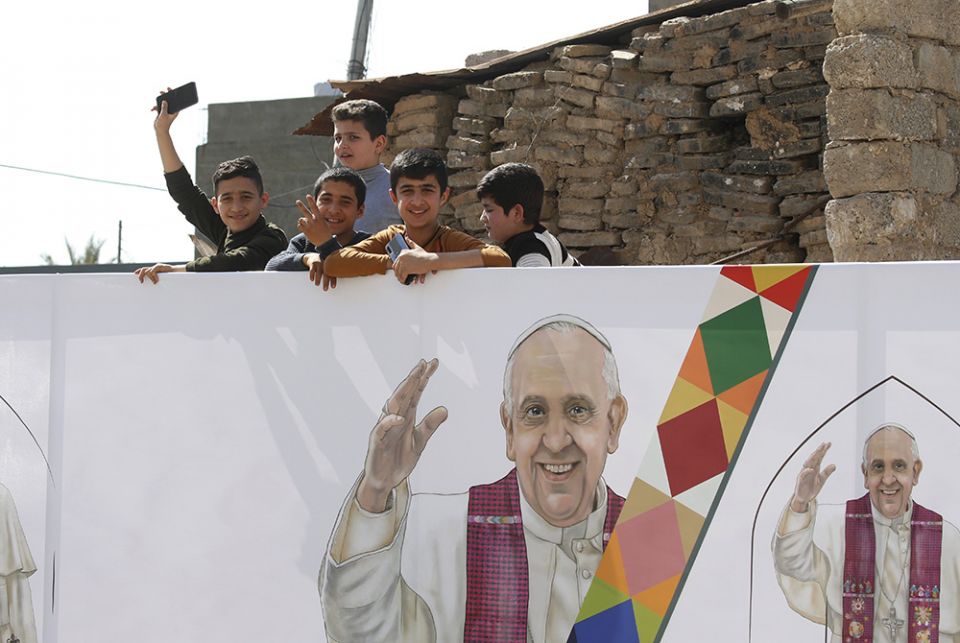 Children are seen near an image of Pope Francis during the pope's visit with the community at the Church of the Immaculate Conception March 7 in Qaraqosh, Iraq. (CNS/Paul Haring)

In fact, there was relatively little diversity in the audience the pope was addressing. With the exception of a few Muslim and Yazidi leaders, most belonged to a single ethnoreligious group: Syriac Catholics.

Qaraqosh's homogeneous population of 23,000 is no coincidence. Muslims from the poorer surrounding villages, including the Shabak — a Shia minority that ISIS also persecuted — struggle to buy homes in the town. Through an informal consensus, Christians in Qaraqosh rarely sell their homes to Muslims, an arrangement that has the tacit agreement of the Iraqi state, which condemned the phenomenon of demographic displacement in 2013.

As a result, Qaraqosh is able to protect its Catholic identity. The church is the center of communal life. The most admired local leader is the archbishop, not the mayor. The town is protected by a mostly Catholic militia, the only Iraqi militia not routinely accused of human rights violations. This militia, whose guardhouses feature statues of the virgin Mary, has successfully protected the town from terrorist attacks since 2016, mostly by limiting access to Qaraqosh natives.

To Western eyes, it can be unusual for a community that professes fraternity to pin its future on keeping out its neighbors.

To locals, however, survival is a prerequisite for fraternity. Most say that without a predominantly Christian population, the town would lose its Christian militia, falling prey to an Iran-backed competitor that circles the town. Without a Christian militia, many locals would emigrate to the West.

"The pope wants us to be brothers. To be honest, though, the relationship between Christians and Muslims isn't great."
—Abbas al-Qasim

Miriam Warda, 63, a Qaraqosh native who asked to use a pseudonym given her job at a public hospital, says that the pope's message resonates, but Christians have to be mindful of their own interests.

"Fraternity is good. I work in a hospital and serve Christians and Muslims equally, without discrimination. As Jesus says, we have to forgive those Muslims who betrayed us to ISIS. We will, however, always remember what happened to us because of them."

Warda, a health professional, refers to stories of betrayal at the hands of Muslim neighbors when ISIS arrived. Her trust was broken and she says she cannot forget.

"If you invite a Muslim to lunch, they will eat with you. If you turn your back, however, they will not hesitate to take control, as they did in Mosul."

To Abbas al-Qasim, 20, a Shabak local who along with 100,000 Christians was displaced to Kurdistan by ISIS, these concerns are overblown. "Muslims don't want anything from Christians."

He said he welcomed the pope's visit and was particularly impressed by his meeting with Shia leader Grand Ayatollah Ali al-Sistani.

"The pope wants us to be brothers. To be honest, though, the relationship between Christians and Muslims isn't great."

Rihaab Saadoun, 26, one of the few Shabak who lives in Qaraqosh, blamed ISIS for any remaining tensions between Christians and Muslims.

"ISIS made it this way. ISIS harmed the Muslim religion, but as Muslims, we want to change that image. We have been living in Qaraqosh for a long time and we don't have problems with anyone here."

Christian concerns around having Muslim neighbors can appear paranoid to Western ears, but locals from Qaraqosh are determined to avoid becoming their neighbor, Bartella, which they point to as a cautionary tale.

Today, Bartella, a town of 18,000, is predominantly Muslim, with only 3,000 mostly Syriac Orthodox Christians. As late as the 1990s, Bartella was almost exclusively Christian. After 2003, however, as al-Qaida took over Mosul, some Christians began emigrating from Bartella. As Christians packed their bags for the West, many sold their homes to Shabak Muslims from neighboring villages. By 2014, although the town remained majority Christian, it had a substantial Muslim minority, and after ISIS was expelled from the town in 2016, this minority became a majority. 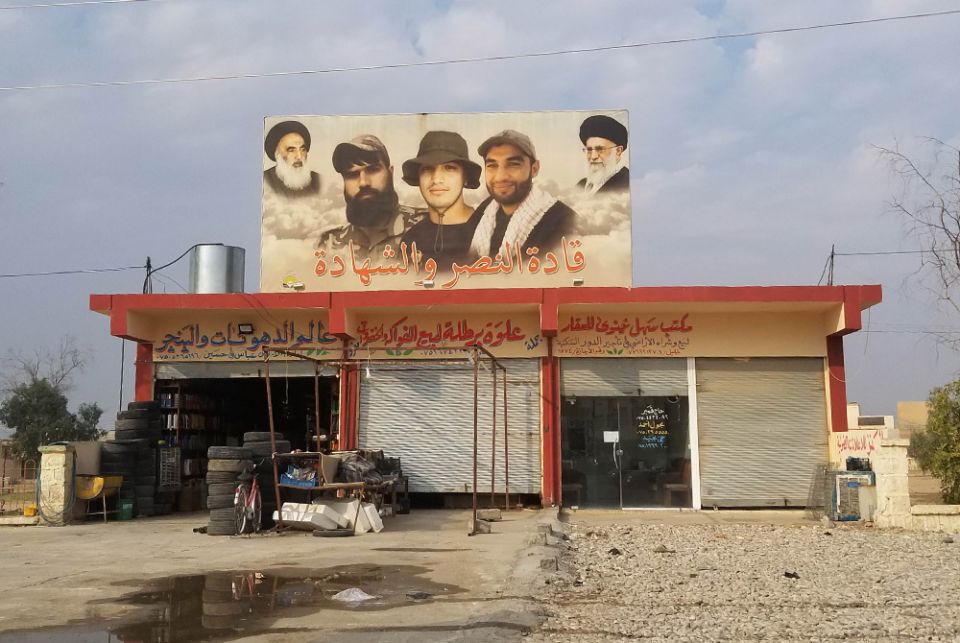 In Bartella, a billboard shows the faces of Shabak martyrs in the fight against ISIS, with Iran-aligned religious leaders looking on. Before ISIS, the town was mostly Christian. (Xavier Bisits)

Some clergy say that the Shabak purchased or illegally repossessed homes with financial support from Iran, which plans to build a Shia corridor from Iran to Syria. The change has been accelerated by other factors, including a higher fertility rate among Shabak and the need for some Shabak to find new homes after persecution by al-Qaida, and then ISIS, in neighboring Mosul.

The result of that demographic displacement has real security implications for remaining Christians. Today, the town is now controlled by an Iran-backed Shia militia accused of torture, rape, murder, extortion and kidnapping. For this reason, several thousand Christians from Bartella are afraid to return to their homes.

Daniel Hadaya, 25, a native of Bartella, spoke to NCR under a pseudonym, concerned about the implications of talking about the local militia.

"We need to have our own Christian community. Today, Bartella is controlled by Iran through the local militia."

"Some of the Shabak are happy that the pope visited. The ones who follow Iran are not happy about him coming, though. This group makes up most of them."

Asked about the pope's message of fraternity, Hadaya says that Christians already understand fraternity: the ones who don't are Muslims.

"Muslims have stolen our land to build houses. This isn't peace. We are tired of building bridges."

Local Christians like Hadaya, who say they are fed up with sectarian tension, hope that Pope Francis will do some of the heavy lifting to build bridges with Muslims.

Consistently, Christians find the most optimism in Pope Francis' groundbreaking meeting with al-Sistani. They hope that this image will inspire local Shia Muslims to support a more quietist version of Islam, instead of the theocratic variant promoted by Iran, including through its local militias.

For themselves, Christians are focused on Pope Francis' message of forgiveness during his visit: a prominent theme in Pope Francis' address in Qaraqosh. Forgiveness, he said, is "key" to remaining Christian. Many Christians acknowledge they need help to forgive crimes as heinous as those committed against them since 2003.

"The road to a full recovery may still be long, but I ask you, please, not to grow discouraged," the pope told Christians. "What is needed is the ability to forgive but also the courage not to give up."

While Christians are divided on how exactly to secure religious diversity in Iraq, all agree that the situation is urgent. Iraq's Christian population has nosedived from 6% a century ago to far less than 1% today, according to data from the World Christian Database.

At this point, there's little room for error.

[Xavier Bisits previously worked in Iraq and serves as vice president of Democrats for Life of America. He is based in Washington, D.C.]

Xavier Bisits previously worked in Iraq and serves as vice president of Democrats for Life of America. He is based in Washington, D.C.