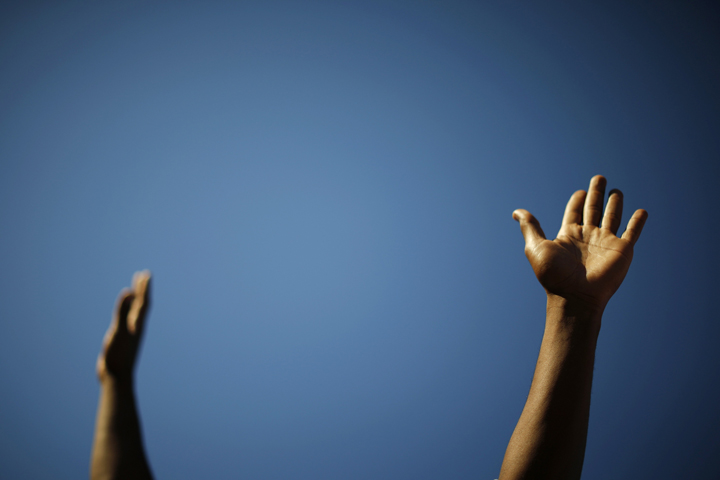 A Los Angeles protester with arms raised participates in a Nov. 25, 2014 march following the grand jury decision in the shooting death of Michael Brown in Ferguson, Mo.(CNS photo/Lucy Nicholson, Reuters)

Carrying a candle flickering in the wind, St. Louis Archbishop Robert J. Carlson Aug. 5 led the group of about 300 people, also carrying candles, shortly after closing his reflection with a request of Mary.

"May we ask the Blessed Mother, who said, 'My whole being proclaims the greatness of the Lord,' to intercede for us and for Ferguson, the greater St. Louis area, our state of Missouri and our nation," he said, an apropos sentiment considering the anniversary looming.

A year ago, on Aug. 9, Michael Brown, an African-American teen, was fatally shot by Ferguson police officer Darren Wilson, who is white, which unleashed the torrent of racial tension lurking just below the surface not only in Ferguson but in the region and the country.

A slogan of protesters last year, "No peace, no justice," hearkens to what Blessed Paul VI said more than 40 years ago for the 1973 World Day of Peace: "If you want peace, work for justice."

Peace and justice have been a theme for the Archdiocese of St. Louis in the past year.

Two Masses for peace and justice have been celebrated at the Cathedral Basilica of St. Louis, with another scheduled for the anniversary of the shooting. At the first Peace and Justice Mass, 11 days after Brown's death, Archbishop Carlson established the Peace and Justice Commission, whose members were to be commissioned at the Aug. 9 Mass.

In his "Faith in Ferguson" reflection Aug. 5, Archbishop Carlson repeated the words of the pope from 1973, saying: "There are situations that 'breed an ever-growing amount of injured prestige, of unrelenting desire for revenge and of endemic and organized disorder. They are not something that can be ignored, as if they will solve themselves with time, because their poison seeps into souls, corroding humanitarian ideologies, becoming contagious and transmitting itself to the youngest generation and carrying with it a fatal inherited commitment to revenge.'"

The archbishop's reading from Chapter 58, verses 6 to 12, of the Book of Isaiah offered the solution: "Releasing those bound unjustly, untying the thongs of the yoke;setting free the oppressed; ... sharing your bread with the hungry; sheltering the oppressed and the homeless;clothing the naked and not turning your back on your own. Then your light shall break forth like the dawn, and your wound shall quickly be healed."

Archbishop Carlson expressed thanks for the work of Catholic Charities in the archdiocese as well as the parishes and schools of Blessed Teresa of Calcutta and Our Lady of Guadalupe, which were active in Ferguson long before the strife last year.

He also thanked "so many gathered here who fed and clothed and built and cared for -- and so much more -- those who dared to change their own way of thinking and loving, and institutional change as well."

But work remains. The Catholic Church's commitment to not only Ferguson but elsewhere won't end with the one-year anniversary; it'll continue into the future, as long as anyone in the universal Church is suffering.

"We renew our commitment to seek meaningful change and healing and an understanding of the pain of others, our brothers and sisters in Christ," Carlson said. "We must continue to work for a better and more holy community -- founded on a respect for each other, respect for life and a shared responsibility for the common good."

For many, the language of Jesus seems "strange in a world where violence often triumphs, but like the first disciples, we need to leave our ordinary way of doing things behind and follow Jesus -- a journey that is never easy," Carlson said.

He identified six ways in which members of the universal church are suffering, not just in Ferguson but in the world at large:

The archbishop called for a "new model ... based on dialogue and getting to know each other, and then looking at the laws that govern us, a fresh outlook on work and the opportunities that exist, the opportunity for a quality education as a pathway out of poverty, sensitivity to the daily challenges we all face, the good of the family, and true freedom of speech and religion."

Finally, Carlson closed the reflection by asking for Mary's intercession. He lit his personal candle after a litany and led the procession to a most appropriate place, Mary's grotto -- the Our Lady of Guadalupe grotto. The service concluded with participants praying an Our Father, reciting the prayer of Mary, Undoer of Knots and exchanging a sign of peace.

Nearby, as traffic rolled by on South Ferguson Road, the ribbons, signifying hope and acceptance, placed on a fence by the school's children last year waved in the wind.