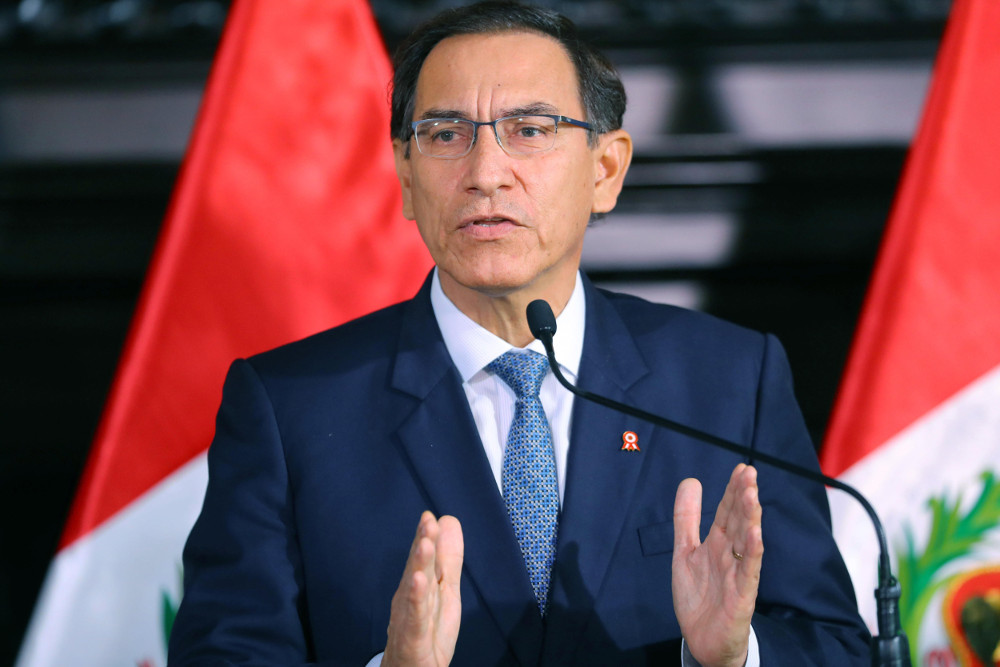 Peruvian President Martin Vizcarra is seen July 11 in the Tupac Amaru hall of the Government Palace in Lima. Vizcarra announced the creation of a commission to propose a reform of the judicial system and said he will present the proposal to Congress during his state of the nation message July 28, Peru's independence day. (CNS/Andres Valle handout via EPA)

Peruvians "have the right to know whether what the recordings reveal ... is an exception or an example of what happens in our system of justice," the bishops wrote in a statement issued July 11.

"If the events are not clarified, our citizens will lose trust in and respect for judicial authorities and the respective institutions, with disastrous results for our country's democratic life," the bishops said.

The phone taps, made by a court order as part of an official investigation, implicate judges and members of the National Council of Magistrates, which hires and fires judges and prosecutors.

President Martin Vizcarra announced the creation of a commission to propose a reform of the judicial system and said he will present the proposal to Congress during his state of the nation message July 28, Peru's independence day. The bishops said they support a reform.

"There must be a real will for this reform to be done in Peru," Archbishop Miguel Cabrejos of Trujillo, president of the bishops' conference, told the state-run news agency Andina July 12. "It is a demand of the entire population, of all citizens, because they are fed up with this problem, which has existed for decades."

The leaked recordings were released by IDL Reporteros, an investigative journalism team at the Lima-based Legal Defense Institute.

On July 10, officials from the public prosecutor's office attempted to search the team's office, prompting a public outcry. In their statement, the bishops demanded "unrestricted respect for freedom of expression and of the press."

The recordings include a Supreme Court judge negotiating the sentence of a man on trial for statutory rape and other members of the judiciary discussing favors. One asks for 10 "verdecitos," or "little green things," an apparent reference to $100 bills.

In another, the chief judge of the court that is handling an accusation of money laundering against Keiko Fujimori, daughter of disgraced former President Alberto Fujimori and leader of the Fuerza Popular or Popular Force, the largest congressional bloc, discusses a meeting with a person referred to as "Señora K" of the country's "largest force."

The Fujimori government collapsed in 2000 after the disclosure of videos showing his national security adviser, Vladimiro Montesinos, distributing millions of dollars in bribes to legislators, other politicians and media owners.

In a speech during his visit to Peru in January, Pope Francis noted that most of Peru's living former presidents face accusations of corruption.

Interviewed on IDL's daily radio program July 11, Cardinal Pedro Barreto Jimeno of Huancayo said, "We are hitting bottom" and called for a "culture of honesty."

Barreto said democracy requires not only electing public officials, but also monitoring their actions and holding them accountable.