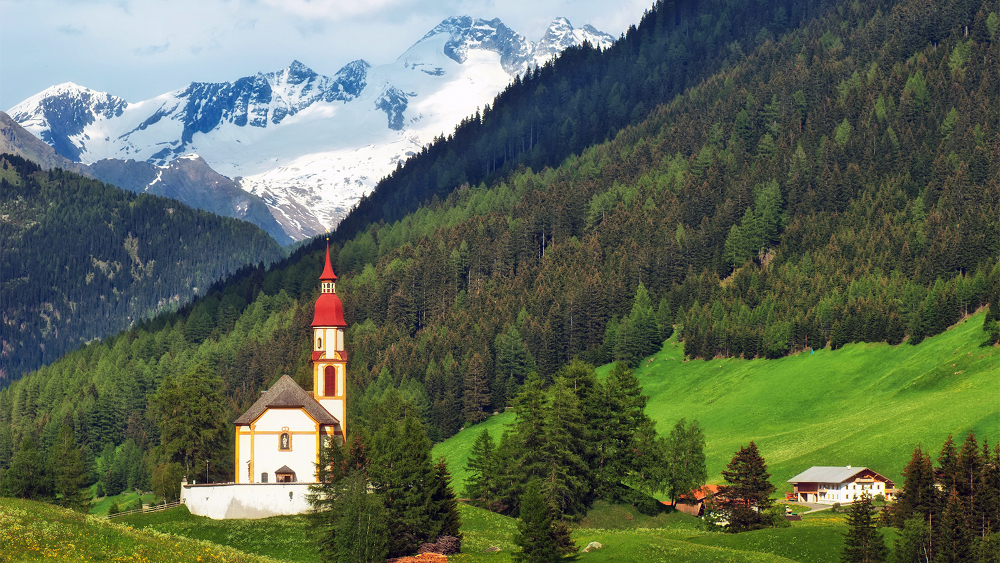 A church in the Austrian countryside (Courtesy of Creative Commons)

To Americans who drop coins into the collection plate, write a check or perhaps text in their Sunday donation, the idea that the state would charge an annual tax to support their church can seem strange and off-putting indeed.

But in several Western European countries, a majority of adults not only agree to pay a church tax imposed on all baptized Christians, but also have no intention of opting out of it, even though they can, according to a new survey by the Pew Research Center published on Tuesday (April 30).

That includes many who don't attend church regularly but who still pay the tax.

From the outside, Western Europe is often seen as a highly secularized region where established religion is dying out. Church taxes are blamed for part of that erosion, because the only way to avoid the tax where it is mandatory is to officially leave the church one was baptized in.

But the Pew report, titled "In Western European Countries With Church Taxes, Support for the Tradition Remains Strong," found far more people still finance their church than attend it.

Of the 15 countries it studied, Pew found six have mandatory taxes — Austria, Denmark, Finland, Germany, Sweden and Switzerland — while Italy, Portugal and Spain have voluntary programs and no church taxes are collected at all in Belgium, Britain, France, Ireland, the Netherlands and Norway.

"In six Western European countries with a mandatory tax on all members of major Christian churches (and in some cases, other religious groups), most adults say they pay it," said the report.

"The share of self-reported church tax payers in these countries ranges from 68% of survey respondents in Sweden to 80% in Denmark, while no more than one-in-five in any country say they used to pay but have stopped.

"In addition, among those who say they pay, large majorities described themselves as 'not too' or 'not at all' likely to take official steps to avoid paying the tax in the future."

Ecclesial finances in Europe have a complex history. Long ago, many churches had vast land holdings to support them, or close ties to rulers who did. In the past few centuries, however, many states have seized church lands and cut back or ended subsidies.

The new tax systems were introduced over the past two centuries to help churches meet their budgets. Some states saw this as a practical way to foster the separation of church and state by making churches financially independent of local governments.

In the United States, where there was no officially recognized and subsidized church to compensate, all faiths are instead granted tax-free status to give congregations a financial break.

European methods of calculating the church tax differ from country to country. In countries such as Austria, Denmark, Finland or Sweden, it ranges between about 1% and 2% of a person's taxable income.

In most cases, the tax is collected by the state tax system and then redistributed to the churches involved, usually the Roman Catholic and main Protestant churches (mostly Lutheran and Reformed), but some countries also include Jews.

There are discussions in Germany about instituting a "mosque tax" to counter the influence of funds coming from hard-line Islamic countries such as Saudi Arabia, but the decentralized nature of Muslim communities makes it hard to fit Islam into the state system.

Some countries have more flexible approaches. Iceland charges all adult residents a so-called "parish fee" that goes to their religious groups or into the state treasury if they are unaffiliated.

Italy sets aside 0.8% of all tax revenues for charitable purposes and payers can earmark their contributions for a specific church or to some humanitarian effort. About four-fifths of the proceeds are given to the Catholic Church.

Switzerland has the most confusing system, with some cantons imposing surcharges of up to 20% of income tax while others charge nothing at all. Many cantons also collect church taxes from companies headquartered there.

Besides attention to church taxes, the report highlights some anomalies about Europeans' attitudes about religious observance. In Finland, 77% of those surveyed called themselves Christian while only 10% said they attended church regularly. In Germany, the figures were 71% Christians compared with 24% churchgoers.

In several countries, half or more of those who approve of church taxes said they also favored the separation of church and state. In Scandinavia, about three-quarters of respondents who pay church taxes through the state they say should stay out of religion.

The roots of this seemingly contradictory view reach back to the 19th century, when European governments began to introduce taxes for churches to ensure their financial future. In this view, states were simply helping them stand on their own feet by collecting taxes to distribute to them.

Germany led the way in introducing church taxes in the mid-19th century and the Scandinavian countries followed around 1900. After annexing Austria in 1938, the Nazis introduced the church tax there.

Spain and Italy supported the Catholic Church from their treasuries until about 1980, when these contributions became voluntary.

There are many reasons for members not to leave their churches even if they don't attend services regularly. In many places, families or individuals have formally registered with their churches, and for some the bureaucratic hassle of deregistering, in addition to their traditional identification with a faith, is strong enough to dissuade them from disassociating themselves.

In Germany, where the tax agencies publish precise figures on departures every year, a court has ruled that anyone who leaves a church can no longer ask for its services such as a wedding or funeral in church. This also keeps many undecided members from leaving.

In several countries, the expansion of the welfare state after World War II included a growing role for social services run by religious groups. "The churches feed the poor, house the needy and run hospitals open to all — I think that should be supported," said one lapsed Protestant in Berlin who has paid church taxes for decades.

The report found that older Europeans were more likely to pay church tax than younger ones now, both because fewer younger people are active church members and because many are still students or do not earn enough to have to pay.

This does not bode well for the future as older paying Christians die out and younger "nones" do not take their place.

"A surge in young adults starting to pay church taxes is unlikely," the report said. "Many are entering adulthood without a religious affiliation and without paying church taxes, replacing older generations of more heavily Christian church tax payers."