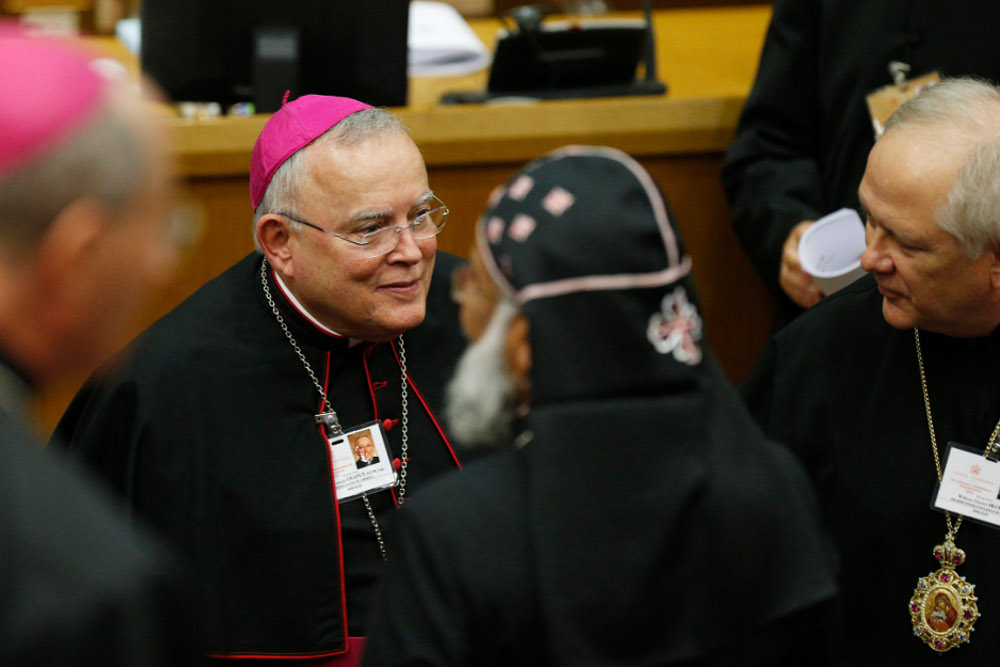 Archbishop Charles Chaput of Philadelphia arrives for the opening session of the Synod of Bishops on young people, the faith and vocational discernment at the Vatican Oct 3. (CNS/Paul Haring)

Acting on his promise to find new ways to support survivors of clerical sexual abuse, Archbishop Charles Chaput announced Nov. 8 that the Archdiocese of Philadelphia is creating a new reparations program open to anyone abused by clergy in the archdiocese.

Philadelphia's archbishop made the announcement in his column on CatholicPhilly.com, explaining the archdiocese will fund the program and "pay the amounts that independent claims administrators deem appropriate."

The Independent Reconciliation and Reparations Program seeks to compensate all victims but especially those whose claims are currently time barred from civil lawsuits under Pennsylvania's statute of limitations.

An effort in the state legislature to allow a limited-time window on the statute for retroactive lawsuits against the Catholic dioceses in the state failed to come up for a vote in the Senate in October. The issue is thought to be dead because the current legislative session ends in mid-November.

The new program will accept claims from abuse survivors and offer them "a secure and respectful means to resolve their claims and receive compensation without the ambiguity, conflict, stress and expense of litigation," said a news release from the archdiocese.

The program is an initiative of the Philadelphia Archdiocese alone and is not joined by the other seven Catholic dioceses in Pennsylvania. The bishops of those dioceses pledged with Chaput in September to support establishing just such a program; the other dioceses have since announced their own programs.

While the Philadelphia Archdiocese indicated it would provide "substantial fiscal commitment" for the program that would impact church ministries "in a serious way," no details on the monetary amount of the fund or how the archdiocese would come up with the funding were revealed.

In the last three years, the finances of the archdiocese have returned close to breaking even after reaching financially catastrophic levels of deficit spending — more than $17 million annually — and $354 million in underfunded obligations, by 2012. Audited financial statements for the archdiocese typically are made public each November for the previous fiscal year.

The archdiocese's statement on the compensation program said funding will be provided by "existing archdiocesan assets," without identifying them.

The archdiocese expects the money needed for claims will require more than the initial unspecified funding level, so "additional program funding will need to come from borrowing and the sale of archdiocesan properties" that have not yet been determined, according to the statement.

Whatever the funding source may be, the program will not tap into money given to the archdiocesan Catholic Charities Appeal, the St. Charles Borromeo Seminary Appeal, other donor-designated funds or donations made to parishes, schools and ministries.

For a comparison of the potential scope of the compensation program, the Archdiocese of New York reported its independent program has paid out $40 million as of late 2017 to 189 survivors of clergy sexual abuse from more than 200 initial claims since the program was launched in 2016.

Philadelphia's Independent Reconciliation and Reparations Program will be led by an oversight committee consisting of former U.S. Sen. George Mitchell, as chair; Kelley Hodge, a former interim district attorney of Philadelphia who served as the city's chief prosecutor between the terms of former district attorney Seth Williams and current district attorney Larry Krasner; and retired chief judge Lawrence Stengel, who formerly led the federal court for the Eastern District of Pennsylvania.

The committee will monitor the claims process, which will be facilitated by professionals experienced with running compensation funds.

They include administrator Kenneth Feinberg, who worked on the September 11 Victim Compensation Fund and similar funds concerning the Aurora, Colorado, theater shooting, the BP oil spill in the Gulf of Mexico and General Motors' compensation for survivors of vehicle accidents due to faulty ignition switches.

Joining him is Camille Biros, who, with Feinberg, has run the compensation programs for clerical sexual abuse survivors in Catholic dioceses of New York, including Brooklyn and Syracuse.

Although Feinberg's team will be responsible for determining whether claims are eligible for compensation and the amount of the reparations, the mechanism for doing both was unaddressed at this time.

In the process of assessing claims, survivors who request compensation will have an advocate in Lynn Shiner, the program's victim support facilitator who oversaw a similar state-run program to distribute more than $100 million to victims of crime in Pennsylvania.

The archdiocese consulted with Shiner on the new program, Chaput wrote in his column, and with her guidance "we designed our program based on input from dozens of victims about what they expect and need from such an effort."

The new victims' compensation program is the latest development in the sexual abuse scandal that first came to light nationwide in 2002 in Boston. The extent of the abuse of young people by some clergy over decades and claims church leaders covered it up was revealed by grand juries investigating the Philadelphia Archdiocese in 2005 and 2011, then the Altoona-Johnstown Diocese in 2016 and the other six dioceses across Pennsylvania last August.

In his column, Chaput again apologized for the pain that sexual abuse victims and their families continue to experience.

"The damage done to innocent young people and their families by sexual abuse in the past is profound," he wrote. "It can't be erased by apologies, no matter how sincere. And money can't buy back a wounded person's wholeness. But what compensation can do is acknowledge the evil done and meaningfully assist survivors as they work to find greater peace in their lives."

While the program represents an apology to victims, it also is "recognizing the harm the church has done, and continuing the critical work to ensure abuse is prevented," Chaput said.

That work, specifically archdiocesan policies on prevention of abuse and care for victims, will continue in addition to the compensation program, whose board will review and evaluate those efforts.

The archdiocesan Office for Child and Youth Protection has distributed more than $18 million since 2003 to victims of sexual abuse, plus another nearly $6 million for safe environment initiatives.

Chaput stressed the compensation program's independence from the archdiocese and its confidentiality with regard to victims. He thanked the members of the oversight board for working "to repair the damage of the past and ease the suffering of survivors and their families."

"I hope this program," wrote the archbishop, "will bring them a measure of peace."