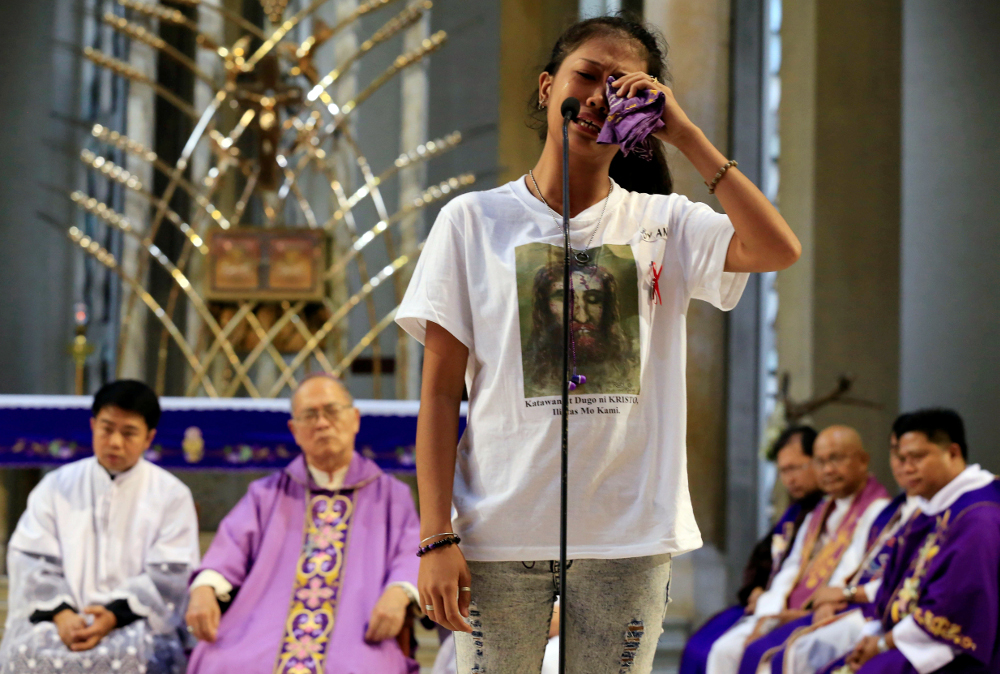 In this 2017 file photo, a woman in Manila, Philippines, speaks during Mass about her loved one being killed due to their alleged involvement in drugs. Three Filipino Catholic priests claimed March 11 that they've received death threats because of their stance against drug-related killings. (CNS/Romeo Ranoco, Reuters)

Three Catholic priests, known for being outspoken against a wave of drug-related killings, claimed they have received death threats in recent weeks, reported ucanews.com.

"We're not safe," said Reyes, known as the "running priest" for his penchant to go on long-distance runs to draw attention to human rights issues.

"We are afraid," said Alejo, adding that they were "fortunate" to have received threats, unlike the "thousands of others killed without warning."

The government has acknowledged the deaths of nearly 5,200 "drug personalities" in nearly 120,000 anti-narcotics operations since July 1, 2016, when President Rodrigo Duterte came to power.

Authorities, however, said all were killed while resisting arrest or attacking arresting officers.

Human rights groups claim more than 20,000 drug-related killings have been classified by police as "deaths under investigation."

The threats against the three priests came soon after Bishop Pablo Virgilio David of Kalookan, the diocese where most drug-related killings have occurred, and Archbishop Socrates Villegas of Lingayen-Dagupan, a vocal critic of Duterte, announced they had received death threats.

Authorities offered to provide security to the bishops and members of the clergy, which was declined.

Villanueva said police should give the poor more protection.

"If the police are sincere in wanting to protect lives, they should be in (urban poor) areas where many are on drug lists," he said.

The priests said they would continue speaking out against killings despite the threats because "speaking against evil is our moral obligation."

Villanueva showed video footage of a masked man who tried to enter his office and residence as proof of the threat he faces.

Fr. Mark Ventura was killed in the town of Gattaran, April 29, four months after Fr. Marcelito Paez was killed in Nueva Ecija province.

In June, Fr. Richmond Nilo was shot dead in Cabanatuan.

"The deadly words of Duterte against Catholics are like a dagger pointed at us," said Reyes.

The president has repeatedly lambasted the Catholic Church and its leaders for being corrupt. He even said bishops should be killed in one of his public appearances.

"The message is clear. It's not only people that (Duterte) wants dead but our faith as well," said Reyes.

Alejo called on those behind the threats to "stop the killings (and) stop doing this business that you've come to enjoy."

The priests also appealed to the public, including church leaders, to speak out against human rights abuses and the killings.

"We are calling on the entire church .... The answer should not be silence, but clear, courageous proclamations and conviction," said Reyes.

The priests said bishops "should be stronger."

The presidential palace dismissed threats against the clergy as the work of "pranksters" or by "anti-Duterte trolls" to paint the president in a bad light.

Salvador Panelo, Duterte spokesman, said sending threats over the phone "is the easiest and most convenient thing to do (because) you can't trace the source."

He said the threats could have also come from "personal enemies" of the priests and bishops.