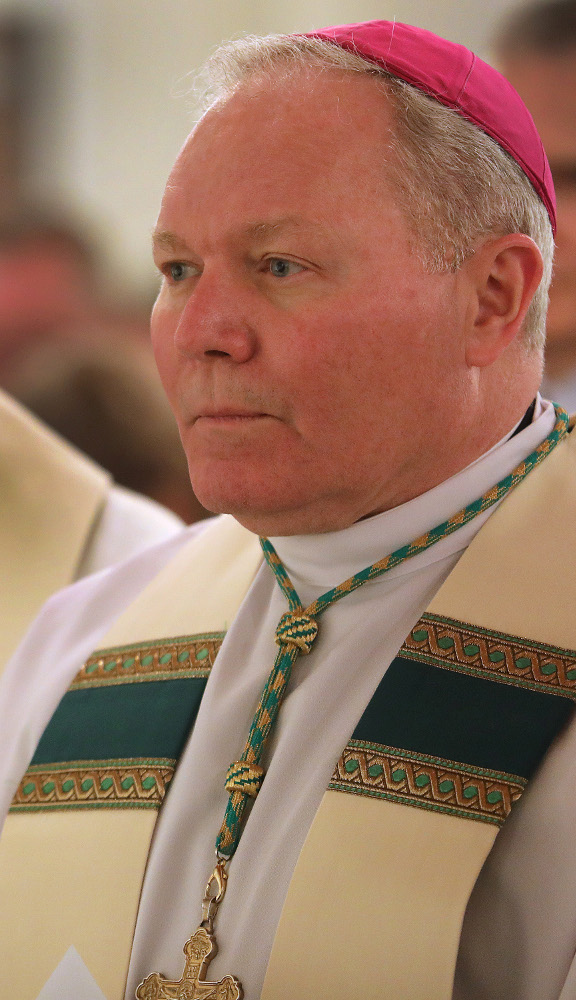 Dallas police executed search warrants at three sites in the Diocese of Dallas May 15, saying the process was an extension of their ongoing investigation of sexual abuse allegations into five current or former priests, including one accused of sexually abusing at least three minors and who is believed to have fled the country to his native Philippines.

Maj. Max Geron, who heads the Dallas Police Department's Special Investigations Division, said detectives had been meeting with diocesan officials over the past several months and that execution of the search warrants were at the pastoral center, an offsite warehouse where diocesan records and documents are kept and at St. Cecilia Catholic Church offices, the parish where one of the accused priests, Father Edmundo Paredes, was the pastor for nearly 20 years.

At a news conference at police headquarters and responding to a question about cooperation by diocesan officials with the police investigation, Geron said: "We have had a number of meetings with them, characterizing that in varying degrees of cooperation. We believe that the execution of the warrants was wholly appropriate for the furtherance of the investigation."

He declined to give specifics of the investigation, other than saying that "these investigations stem from additional allegations made after the case against Mr. Paredes became public."

Annette Gonzales Taylor, diocesan spokeswoman, said the search warrants on the three sites were a surprise because church officials believed they had been fully cooperating with investigators.

Bishop Edward Burns told reporters at a news conference later in the day that the execution of the search warrants was another opportunity for the diocese to cooperate with law enforcement officials. He denied that diocesan officials or attorneys working for the diocese had not cooperated fully with investigators, as alleged in an affidavit written by Dallas police Detective David Clark to support the search warrant.

"The diocese will continue to cooperate in all investigations of sexual abuse against minors," Burns said. "We recognize that throughout our collaboration with police there are some who are not satisfied and want to look for themselves. We know we have given them the files and so we say, by all means, look and, indeed, if today's events is what gives them the opportunity for them to look for themselves, so be it."

The search warrant sought information and documents relating to five priests no longer serving in the diocese and who were among 31 that diocesan officials named earlier as credibly accused of allegations of sexual abuse of minors.

Part of the affidavit from Clark stated that police received incomplete records and that at least one member of the Diocesan Review Board had "unofficially" urged police to seek documents relating to some of the other priests whose files were "flagged" by diocesan investigators, but whose names were not among the 31 made public.

"If there were concerns, they are faulting on the very fact of their existence. It's important that they raise those," the bishop said in response to a reporter's question.

The bishop said the names of the Diocesan Review Board are confidential, but that the board includes members involved in law enforcement, clinical psychology, law and medicine.

The search warrant sought information on files related to five former priests and the perceived sexual assault of minors while they served in the Diocese of Dallas. They include three priests in their 70s: Paredes, Richard Thomas Brown and Alejandro Buitrago; and two priests in their 60s: William Joseph Hughes Jr. and Jeremy Myers, the longtime former pastor of St. Mary's Catholic Church in Sherman. Paredes, Buitrago and Myers are suspended from active ministry; Brown is listed as absent on leave; and Hughes has been laicized.

Earlier in the day, police went to the offices of St. Cecilia Catholic Church and removed several boxes. At approximately the same time, at least two dozen Dallas police officers and several FBI agents entered the main pastoral center building to begin executing the search. Throughout the day, numerous plainclothes law enforcement officials were seen entering and exiting the building.

Marked police cars and a cargo truck blocked entrances to the garage and main parking area. A little after 6 p.m., police began removing boxes upon boxes of files and loading them into a Dallas police cargo truck.

The issuance of search warrants in Dallas is one of two so-called raids at large diocesan offices in Texas. Last November, law enforcement officials executed a search warrant at the Archdiocese of Galveston-Houston.

The execution of the Dallas search warrants comes after months of reports from around the United States and the world about clergy sex abuse that have rocked the universal church and efforts to combat it, locally and globally.

On Jan. 30, Burns and several diocesan officials went to St. Mary's Catholic Church in Sherman. The bishop told parishioners their pastor had been credibly accused and his name would appear on the list the next day. Many parishioners were dismayed; some cried and others lashed out at the bishop.

The next day, Burns announced the names of the 31 priests who had been credibly accused of allegations of sexual abuse of minors between 1950 to the present day. The list was developed after former law enforcement officials combed through more than 2,420 files of priests over a period of several months and in consultation with the separate Diocesan Review Board. The announcement coincided with the simultaneous release of similar lists by most of the other 14 Catholic dioceses in Texas.

Clark, in his affidavit, questioned the validity of the credentials of the private investigators in sexual abuse crimes and said he had only been given one name to follow up with, but that he had been unable to contact them.

On May 15, after the execution of the search warrant, Burns said he consulted with Kathleen McChesney, the former FBI agent who led the group of private investigators who spent months reviewing the Dallas clergy files.

Burns said McChesney "called me back, and she was just so perplexed by the number of errors that were present in the affidavit and the search warrant."

"Nevertheless," he said, "you saw how extensive it is, so if there is a need to address any inaccuracy, we are going to do it together, and we'd be more than happy to address those inaccuracies with the Dallas Police Department."

Earlier this month, Pope Francis released a document calling for new norms and protocols on how clergy abuse must be handled and reported globally. The document is the result of the conference that the pope called for in February with the heads of bishops' conferences worldwide.

Burns has encouraged any additional victims of abuse by clergy to report it to law enforcement or by calling the Texas Abuse Hotline at (800) 252-5400 and contacting Barbara Landregan, the diocesan victims assistance coordinator, at (214) 379-2812 or blandregan@cathdal.org.

A version of this story appeared in the May 31-June 13, 2019 print issue under the headline: Police search Dallas diocesan sites for files on alleged abusers.