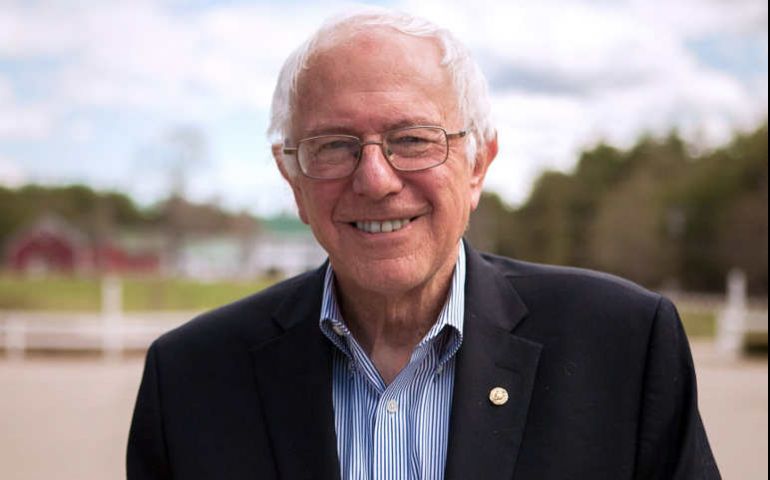 U.S. Sen. Bernie Sanders, who is running for the Democratic nomination for president, is officially set to speak on the first day of a Vatican conference on Pope John Paul II's 1991 encyclical, Centesimus annus​. A revised conference program shows Sanders now slotted for a 10-minute presentation Friday afternoon at the academic conference. His speech is titled, "The Urgency of a Moral Economy: Reflections on the 25th Anniversary of Centesimus Annus."

Last week, Bishop Marcelo Sanchez Sorondo, chancellor of the Pontifical Academy of Social Sciences, which is hosting the conference, told NCR that he anticipated Sanders, originally listed as a participant and not presenter, would be given the same opportunity to speak as other politicians at the conference. Presidents Evo Morales of Bolivia and Rafael Correa​ of Ecuador will present two of the five academic papers that will guide discussion across the two days. The schedule allots 30 minutes for each paper, followed by two 15-minute responses and a 15-minute open discussion. Sanders' presentation is sandwiched between the prepared responses to Correa's paper, which is titled "Changes in the World Political Situation Since 1981."

The conference will look at political, economic and cultural changes since the release of Centesimus annus​​ -- John Paul II's own revisiting a century later of Pope Leo XIII's encyclical Rerum Novarum -- and how Catholic social teaching has engaged the world during that time and how it might do so going forward.

The original story is below:

U.S. presidential hopeful Bernie Sanders will head to the Vatican next week to take part in a small scholarly conference revisiting an encyclical from Pope John Paul II confronting economic issues. But how his invite arrived has become a point of contention.

While the independent U.S. senator from Vermont said he accepted a Vatican invitation, one of the conference's organizers charged his campaign instead lobbied for his inclusion.

Sanders told MSNBC's "Morning Joe" on Friday that he "was very moved" by the Vatican's invitation to attend the symposium.

But Margaret Archer, president of the Pontifical Academy of Social Sciences, which is hosting the conference, told Bloomberg News that "Sanders made the first move, for obvious reasons."

The conference, scheduled for April 15-16 as an academic gathering of 30 participants, will place Sanders in Rome a day after a debate in New York with fellow Democratic candidate Hillary Clinton and just days before the state's April 19 primary. Roughly one-third of New Yorkers are Catholic.

A copy of the invitation sent to Sanders, obtained by NCR, is dated March 30 and signed by Bishop Marcelo Sanchez Sorondo, chancellor of the Pontifical Academy of Social Sciences.

Sanchez confirmed to NCR that the invitation to Sanders came from the academy and he was happy the senator accepted.

In a statement Friday, Sanchez said the academy is "delighted" to host the conference and bring together world leaders such as Sanders, Bolivian President Evo Morales and Ecuadorian President Rafael Correa, in addition to leading academic scholars, including Archer and Jeffrey Sachs of the Earth Institute at Columbia University.

The purpose, he said, is "to examine and discuss changes in politics, economics, and culture in the world these last 25 years in the light of" Pope Francis' encyclical on the environment and human ecology "Laudato Si', on Care for Our Common Home."

"Our intention is socio-political in the highest sense of the term," Sanchez said.

The chancellor told CNN that Sanders' attendance "does not signify any support for the campaign," and that the academy sought to establish a dialogue between North and South America by inviting a U.S. politician.

"I don't know what is the problem," he told NCR. "We have two presidents from Latin America, and we don't have a problem. And we have a problem because we invited one candidate to the White House of your country? It's a little impossible to understand."

The conference is focused around the 25-year anniversary of John Paul II's encyclical Centesimus annus. The social encyclical, which published May 1, 1991, revisited a century later Pope Leo XIII's encyclical Rerum Novarum on work and labor, and reapplied its teachings in the wake of the fall of the Soviet Union and in the midst of a rebuilding Eastern Europe.

Sanchez said that the conference will similarly look at Centesimus annus in the modern context and examine areas that have changed in the last quarter century. That Sanders has discussed in his campaign the issues of exclusion, climate change and new forms of slavery -- all topics Sanchez anticipated would come up during discussion of modern problems unaddressed in John Paul's encyclical.

Sanders has concentrated his campaign largely around the issue of income inequality and principles of democratic socialism. He has pledged if elected president to reform Wall Street banks and financial institutions, raise the minimum wage nationwide to $15 an hour, and invest $5.5 billion in a youth jobs program toward creating 1 million jobs.

During the MSNBC interview, Sanders, who is Jewish, said while he and Francis disagree on areas such women's rights or gay rights, they share views when it comes to the economy.

Sanders explained that Francis has drawn attention to the "dispossessed," pointing to high rates of unemployed youth around the world and to elderly who struggle with a limited income.

"But you know what else he's even doing? He's talking about the idolatry of money. The worship of money. The greed that's out there. How our whole culture is based on 'I need more and more and more, and I don't have to worry about veterans sleeping out on the street, or elderly people who can't afford their prescription drugs.' And he's trying to inject a sense of morality into how we do economics," Sanders said.

The Vatican conference on Centesimus annus will be a small gathering of roughly 30 scholars. It is not open to the public. Pope Francis is not expected to attend, though Cardinal Oscar Rodriguez Maradiaga, head of the pope's Council of Cardinals, will speak at the conference's opening.

The remainder of the conference will situate around the presentation of five papers. Presenters include Sachs and each of the Latin American presidents, in addition to Fr. Bryan Hehir, of the Harvard University John F. Kennedy School of Government, and José Casanova, senior fellow at the Berkley Center for Religion, Peace and World Affairs, in Washington, D.C.

Asked if Sanders might address the conference as well, Sanchez said, "I think that he needs to have the same possibility as the other political leaders." He clarified that it would have to be within the context of Centesimus annus.

According to the conference booklet, the symposium will explore two major issues: What changes have occurred in the world -- economically, politically and culturally -- in the last 25 years? And how has Catholic social teaching engaged the world during the time, and how might it best do so in coming decades?

"How ought we to think about the cultural situation today and what realities call for further reflection within Catholic social thought today to better understand the situation of ordinary people, especially the poor and marginalized?" it asked.

At least one conference attendee who spoke on background said they anticipated a "generic academic conference" but are now "queasy" how Sanders' presence, and the political overtones accompanying him, might distort a more academic reflection on the interrelationships between markets and morality.

"It's just tricky to navigate those issues, and I don't know that a politician -- any politician, not Sanders in particular -- is well equipped to navigate them in a subtle and nuanced way," the attendee said.

Sanchez told NCR that "the real consideration here is not the question of the political effect," but rather to follow the task of the academy, to give deep consideration of social and political realities in light of the magisterium of the pope.

"And to speak about politics, I think that the best solution is to have politicians," he said.

Your thoughts on banning a child from Catholic education