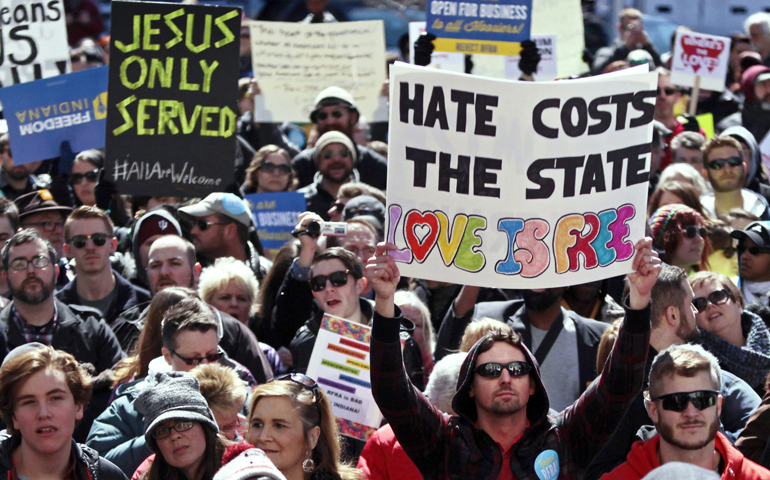 Indiana's Catholic bishops on Wednesday urged people to show mutual respect for one another and allow "the necessary dialogue" to take place to make sure no one in the state will face discrimination, "whether it is for their sexual orientation or for living their religious beliefs."

Remarking on the state's Religious Freedom Restoration Act, signed into law March 26, they said it "appears to have divided the people of our state like few other issues in recent memory."

Their statement came amid protests by gay rights groups and others who say that the new religious freedom law could be a vehicle of legal discrimination.

Republican Gov. Mike Pence said he stood behind the religious freedom bill passed by the Indiana General Assembly when he signed it into law but has since asked state lawmakers to send him some clarifications to make "it clear that this law does not give businesses the right to deny services to anyone."

Pence attributed the firestorm over the measure to a combination of what he called "mischaracterization," "misunderstanding" and "sloppy reporting." As a result "Indiana has come under the harsh glare of criticism from around the country," he said.

In their statement, the Catholic bishops reiterated the Catholic church's teaching that "every human being is created in the image of God," that "every person deserves to be treated with dignity and respect" and that everyone has a right to life's basic necessities.

"We believe that it is crucial that religious freedom be protected," they said.

"We support efforts to uphold the God-given dignity of all the people of this state while safeguarding the rights of people of all faiths to practice their religion without undue burden from the government," they said in conclusion.

At the signing ceremony, Pence said if he thought the religious freedom bill "legalized discrimination in any way in Indiana, I would have vetoed it. For more than 20 years, the federal Religious Freedom Restoration Act has never undermined our nation's anti-discrimination laws, and it will not in Indiana."

"Indiana's law contains no reference to sexual orientation," he said, adding that it "simply mirrors" the federal law, known as RFRA.

The 1993 law says that the government "shall not substantially burden a person's exercise of religion" unless that burden is the least restrictive means to further a compelling governmental interest." It does not apply to the states, so with Indiana, there are now 20 that have passed such legislation.

In a March 27 post on a blog for lawyers called IN Advance, Indiana trial lawyer Matt Anderson called his state's measure a "vague and just a poorly written law" that he said could be applied to disputes between private citizens. "You can defend yourself in a criminal or civil action on the very broad basis of 'any exercise of religion,'" which is how it could be used to discriminate against gays and others, he argued.

Richard Garnett, a law professor at the University of Notre Dame in northern Indiana, in an opinion column in the March 26 issue of the South Bend Tribune, called the state's RFRA a "moderate measure" modeled after the federal law and those of several other states and said it "does not give anyone a 'license to discriminate.'"

Garnett noted that the more than 20 years of history of the applying of RFRA statutes to specific cases shows that courts across the country "have not applied it to require excessive accommodations or exemptions from anti-discrimination laws and civil-rights protections."

In response to criticism, House Speaker Brian Bosma and Senate President Pro Tem David Long announced that the General Assembly will consider legislation to clarify the religious freedom law, which received a large majority of support from both chambers. The Senate passed the bill 40-10, and the House approved it 63-31.

Several House members spoke out against the bill during floor debate.

Democratic Reps. Vernon Smith of Gary and Cherrish Pryor of Indianapolis, who are African-Americans, said even though they were devout Christians, they opposed the bill because they believed it could potentially cause discrimination.

In his opinion piece, Garnett pointed out that religious freedom laws have helped people of a broad variety of faiths.

"In practice, over the last two decades or so, Religious Freedom Restoration acts have been used not to excuse illegal discrimination or harmful behavior but instead to secure humane accommodations," Garnett said, "such as allowing members of a small Brazilian church to possess plants that are necessary to make sacramental tea, or preventing the government from firing a Rastafarian with a traditional haircut, or respecting a family's religious objections to an autopsy of their loved one."

Professor Daniel Conkle of Indiana University's Maurer School of Law has repeatedly sought to debunk the claims that RFRA allows for discrimination, citing current legal cases in support of his position. He testified during the House and Senate hearings, and reiterated his position in a recent opinion column in The Indianapolis Star.

He added that "most religious freedom claims have nothing to do with same-sex marriage or discrimination."

Conkle said in his column the Indiana law is "anything but a 'license to discriminate,' and it should not be mischaracterized or dismissed on that basis." According to Conkle, even in the narrow setting of wedding service providers, claims for religious exemptions recently have been rejected in various states, including states that have adopted RFRA legislation.

[Brigid Curtis Ayer is a correspondent for The Criterion, newspaper of the Indianapolis archdiocese.]