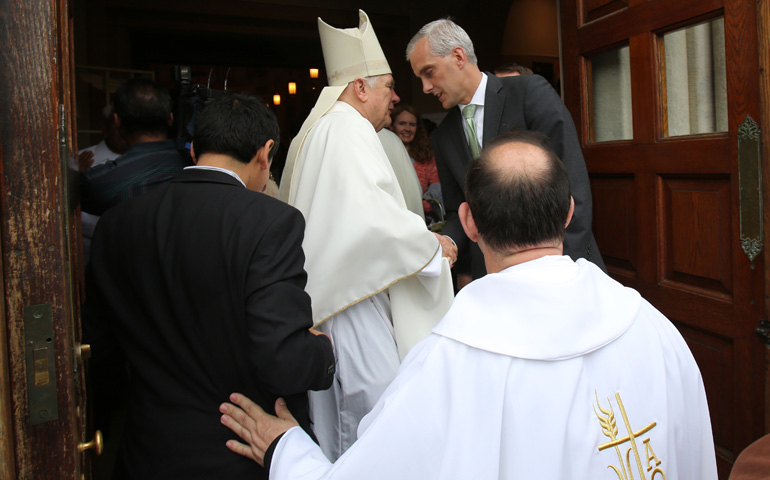 Five U.S. Catholic bishops took to Capitol Hill on Thursday to press again for Congress to consider comprehensive immigration reform, targeting specifically Republican Speaker John Boehner, a Catholic who for a year has prevented the House of Representatives from voting on the issue.

The message from the bishops, in public at least, is stark and direct.

During the homily at a morning Mass before the bishops were to meet with several members of Congress, including Boehner, Miami Archbishop Thomas Wenski put it bluntly: Current law on the issue is "antiquated and inadequate."

"Our immigration system is a stain on the soul of our nation," continued Wenski, chair of the U.S. bishops' committee on domestic justice and human development. "As a moral matter, it must be changed."

The U.S. bishops organized the Mass and lobbying as a follow-up to a similar Mass held in April in the Arizona border town of Nogales, celebrated just a few feet away from a wall separating the U.S.-Mexico border. Several bishops there distributed Communion to those in Mexico by extending their hands through the gaps in the iron slats of the 30-foot-high fence.

At a press conference following Thursday's Mass, held at the Capitol Hill parish of St. Peter's, Seattle auxiliary Bishop Eusebio Elizondo said the bishops were compelled to act on the immigration issue because "every single human being is a brother or sister."

"We are here not because we are politicians, but because we are human beings," said Elizondo, who serves as the chair of the U.S. bishops' migration committee. "It's because the love of Christ is inside each of us and [Christ] called us to be witnesses of that."

As the bishops press individual members of Congress, they will likely find it tough going. While the Senate passed an immigration reform bill in June 2013, the House of Representatives has yet to consider that bill or others addressing the issue.

Boehner, who as speaker of the House determines which bills Congress will vote on, has lately blamed his Republican colleagues for the House's inaction, saying he has been pushing them on the issue for a year and a half.

"I've had every brick and bat and arrow shot at me over this issue just because I wanted to deal with it," he said during a speaking event in his district in April, mocking other Republicans who say, "Don't make me do this" or "This is too hard."

While the Senate bill would likely pass the House with enough Republicans joining wide Democratic support for the measure, Boehner has so far been reticent to allow a vote for fear of political fallout from the remaining Republican members opposed to the Senate bill.

Asked about the political quagmire preventing a vote on immigration reform, the U.S. bishops would not say Thursday how they hoped to sway Boehner on the issue.

"We are here because we do believe that there is hope," Elizondo said. "I think we have succeeded already. We are making a difference a little by little."

Bishop Ricardo Ramirez, the retired ordinary of the border town of Las Cruces, N.M., said he thought Congress will "listen to the number of votes."

"The number of Latino voters is growing exponentially," he said.

Ramirez also said the bishops were seeking congressional action over an executive order from President Barack Obama stopping deportations of unauthorized immigrants because they want a "permanent fixture rather than a presidential action."

"We want laws to pass, not just a presidential decree," Ramirez said. "We want Congress to act."

Perhaps as an indication of the White House's interest in the issue, Obama's chief of staff, Denis McDonough, who is Catholic, attended the Mass. Also present was Melissa Rogers, the director of the White House Office of Faith-Based and Neighborhood Partnerships.

As a reminder of the border event, large images of the bishops celebrating that earlier Mass were placed at the back of the church. Also on display were a number of items used by migrants who have traversed the border, including rosary beads and sandals that had become warped and torn from the heat and the journey. A sign stated that the remains of 2,595 migrants were found on the U.S./Mexico border between 2000 and 2013.

Wenski also pushed for immigration reform Thursday in a column for The Hill, a daily newspaper published in D.C. and targeted at Congress and its staffers.

Likewise, a group of 30 influential Catholic leaders signed a full-page ad published in the Politico newspaper calling on Boehner to allow a vote on immigration reform.

"Legislative obstruction in the face of preventable suffering and death is not only a failure of leadership," the ad states. "It is immoral and shameful."

"Is our nation so callous that we fail to weep for those nameless lost?" it asks. "We pray that you and your colleagues in the House have the moral courage to show real leadership and act."