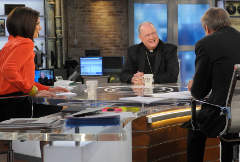 Following news that President Barack Obama has decided to revise a controversial mandate requiring contraceptive coverage in health care plans, several of the groups who expressed the most concern about the mandate are trying to sort out whether they will support the revision, while others have already rejected it outright.

An initial statement from the bishops’ conference said the conference was “studying” the revised mandate.

While it said the bishops see “initial opportunities in preserving the principle of religious freedom after President Obama’s announcement today,” it also said the conference “continues to express concerns.”

“While there may be an openness to respond to some of our concerns, we reserve judgment on the details until we have them,” said Cardinal-designate Timothy Dolan, president of the conference.

Obama’s announcement of a revised mandate came after religious groups denounced the original version, saying it violated principles of religious liberty and would force employers of religiously-affiliated institutions opposed to birth control -- including Catholic hospitals and schools -- to violate their consciences.

Under the revised plan announced this morning, when an employer affiliated with a religious group declines to provide contraceptive coverage to employees, insurance companies will be required to offer the coverage to individuals who want it free of charge.

Obama said that the new version of the mandate ensures that religious institutions will not have to pay for contraceptive services or refer employees to organizations that provide such services.

A letter issued by several well-known Catholic intellectuals following announcement of the compromise disagreed strongly with the president and said the revision “fails to remove the assault on religious liberty and the rights of conscience which gave rise to the controversy.”

“The simple fact is that the Obama administration is compelling religious people and institutions who are employers to purchase a health insurance contract that provides abortion-inducing drugs, contraception, and sterilization,” reads the letter. Signers include former U.S. ambassador to the Holy See Mary Ann Glendon; John Garvey, president of The Catholic University of America; and Princeton professor Robert George.

“This is a grave violation of religious freedom and cannot stand,” reads the letter. Also signing are Notre Dame University law professor Carter Snead and Yuval Levin, a fellow at the Ethics and Public Policy Center.

Speaking last night, the bishops’ conference general counsel Anthony Picarello said the bishops were looking for a total rejection of the original version of the birth control mandate and not just an exemption for employers affiliated with religious groups.

Picarello’s comments, made on the “PBS NewsHour,” came after he had made an analogy earlier in the day that the bishops were also concerned about Catholics who might own companies, such as a Taco Bell franchise, and felt they could not in good conscience provide contraceptive services to their employees.

“What we’re looking for in terms of breadth is to protect the religious liberty interests of all those who would be affected by the mandate,” Picarello said on the NewsHour.

“So that means employers … with religious people running them or other people of conviction who are running them,” he said. “The bishops are concerned with all of them, and they advocated for all of them.”

The original version of the mandate, finalized by HHS in late January, required employers to provide preventive medical services for women, including contraception, to their employees.

A representative for the Becket Fund for Religious Liberty, which is representing three organizations suing the Obama administration over the original mandate, said the compromise amounts to an “accounting gimmick.”

Speaking on CNN following the president’s press conference, Luke Goodrich, the fund’s general counsel, said the compromise leaves out hundreds if not thousands of religious groups, and will force self-insuring, religious organizations to pay for contraception.

“A lot of religious individuals who run small business are not covered by this supposed compromise and they are going to be forced to violate their religious beliefs, too,” he said. “So at the end of the day what this supposed comprise really is is an accounting gimmick.”

A statement from one of the organizations represented by the Becket Fund in a lawsuit against the administration said it remains “quite skeptical” that the compromise will address its concerns.

Michael Warsaw, the president of the Catholic news organization Eternal Word Television Network said his company self-insures its employees’ health care plans and that the company “will still be forced to pay for these services in violation of our religious beliefs.”

Meanwhile, an organization representing nearly 1300 insurance companies said in a statement that it was also “concerned about the precedent” Obama’s compromise would set for payment of insurance coverage.

“We are concerned about the precedent this proposed rule would set,” said Robert Zirkelbach, the press secretary of America’s Health Insurance Plans, a trade organization representing the health insurance industry. “As we learn more about how this rule would be operationalized, we will provide comments through the regulatory process.”

For his part, Dolan, who is also archbishop of New York, has written a letter to be read at all Masses in his archdiocese this Sunday, which calls the compromise a “welcome first step.”

“Friday’s announcement that the federal government seems to have softened the mandates, and is open to working with us in further progress, is a welcome first step” reads the letter, which is available online. “We must study [the revised mandate] carefully. However, we cannot let up in our concern for the protection of religious freedom and the reverence for conscience which are at the heart of American values.”

Did Times forget its motto of 'All the news that's fit to print'?

The truth will set you free, but first it will make you miserable