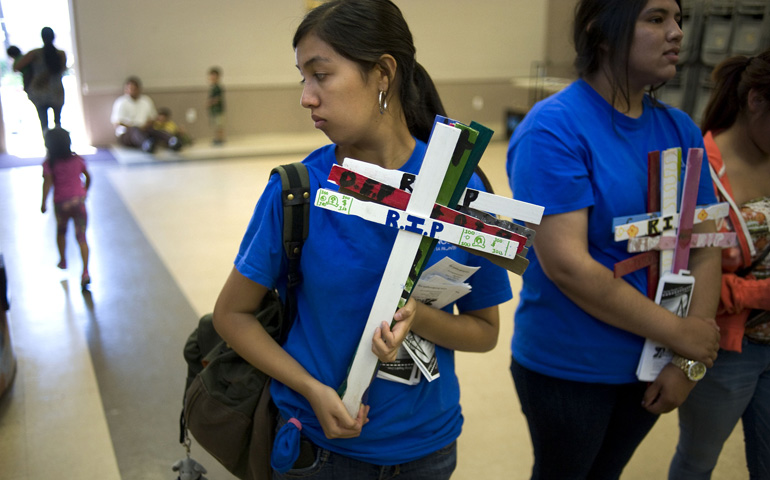 Three bishops weighed in on the ongoing congressional debate on immigration reform legislation Monday, warning against amending a Senate bill in ways that would block the path to legalization for undocumented immigrants.

At a news conference in San Diego, held as the U.S. Conference of Catholic Bishops opened its annual spring meeting, the chairmen of three committees reiterated the bishops' support for comprehensive immigration reform that protects families and workers.

"Each day in our parishes, social service programs, hospitals and schools, we witness the human consequences of a broken immigration system,” said Los Angeles Archbishop Jose Gomez, chairman of the USCCB's Committee on Migration. "Families are separated, migrant workers are exploited, and our fellow human beings die in the desert."

He called the status quo morally unacceptable, adding, "This suffering must end."

Bishop John Wester of Salt Lake City, chairman of the Committee on Communications and former chair of the migration committee, specified a handful of concerns for changes to the bill that might be attempted on the Senate floor. The Senate began debate on the bill the previous week and was scheduled to take a procedural vote over whether to allow debate to continue Tuesday. A panel of House members was reportedly still working on a version of a bill for that chamber.

"Some will argue that before we can begin welcoming new citizens, we will need more fencing and blockading of the border," Wester said. "However, making the legalization program contingent upon border metrics that are practically impossible to achieve would effectively prevent the undocumented from ever becoming citizens, or even legal residents. Such a step would render the immigration reform program useless and the bill not worth supporting.

"We urge Congress to maintain the current balance between enforcement goals and improvements in the legal immigration system, including a path to citizenship."

Wester said efforts to prevent immigrants in the legalization program from obtaining benefits such as the earned income tax credit, Social Security and eligibility for health care coverage also would meet the church's opposition.

People who pay taxes and otherwise contribute to the economy "should not be barred from these benefits, to which every worker should be entitled," he said.

Wester said he hopes the legislative process would lead to improvements in the Senate bill, not additional restrictions.

Bishop Jaime Soto of Sacramento, a member of the board of directors of the Catholic Legal Immigration Network, warned that attempts to reform the immigration system would fail if they don't allow for immigrants to fully incorporate into American society.

He said the key points of the bishops' policy goals for immigration reform include:

Soto said it's important to consider why people risk their lives to come to the United States and how to address global poverty and persecution.

Gomez said as the debate continues, the nation must answer several questions:

"Do we want a country with a permanent underclass, without the same rights as the majority? Do we want to continue to separate children from parents, creating a generation of young U.S. citizens who are suspicious and fearful of their government? Do we want a nation that accepts the toil and taxes of undocumented workers without offering them the protection of the law?"

"The answer to these questions, of course, is a resounding no," Gomez said.