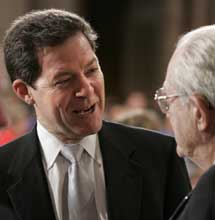 Kansas Republican Senator Sam Brownback, in a fundraising letter for a new Washington-based antiabortion group distributed under his signature, questioned whether six of his Democratic colleagues and the Speaker of the House are genuine Catholics.

"Real Catholics need a new voice — not the likes of Ted Kennedy and Nancy Pelosi who have campaigned as Catholics while voting to undermine the values that we hold most dear," according to the undated Brownback letter.

NCR received the letter in the mail Feb. 17.

"The same can be said for the five 'Catholic' senators sponsoring the Freedom of Choice Act," continues the letter, which then specifically cites Sens. Edward Kennedy (D-Mass.), John Kerry (D-Mass.), Barbara Mikulski (D-Md.), Robert Menendez (D-N.J.), Patty Murray (D-Wash.), Maria Cantwell (D-Wash.) and House Speaker Nancy Pelosi (D-Calif.) as among those who "openly and unabashedly claim to be Catholic — every year at election time" but who then "once in office … willfully cast life-destroying votes at every turn."

The letter, carried in an envelope that bears Brownback's signature in a manner similar to official Congressional correspondence, was distributed on behalf of Catholic Advocate, a project of the Washington-based Morley Institute for Church and Culture, publisher of Inside Catholic, a conservative Catholic Web site.

A spokeswoman for Catholic Advocate said the letter was sanctioned by Brownback. "Approval came from the senator's office," Brenda Steele said in a Feb. 20 e-mail provided in response to NCR's questions.

But Brownback spokesman Brian Hart said, "Our chief of staff ... had never seen, heard of, or approved it." Hart said Brownback's Senate staff has "reached out to both the organization responsible and the mail house [responsible for printing and distributing the letter] and directed them not to use Sam Brownback's name, signature, likeness or representation in any way moving forward and expressed that we are not pleased with the content of the letter."

It is unusual, and perhaps unprecedented in modern times, for one senator to question the religious practices of another.

"This is an astonishing breach of the basic norms of civility long honored in the United States Senate," Stephen Schneck, professor of political science and director of The Catholic University of America's Life Cycle Institute, told NCR. "Regardless that FOCA is horrible and — for me — immoral legislation, an affront like this between senators is unfathomable," said Schneck.

It is also counterproductive, said Schneck. "How can language like this do anything but hurt the pro-life cause?"

Said Whitney Smith, press secretary to Senator Kerry, "At a time when the whole cloth of Catholic teachings demands we work together to find answers for so many who are suffering in this world, it's disappointing to see incendiary political fundraising rather than good faith efforts to promote the common good and work together to reduce the number of abortions."

The Brownback letter states that the Freedom of Choice Act (FOCA) is an "imminent threat" and that the aforementioned senators are cosponsors of the bill, though the legislation does not actually exist. While versions of the measure were introduced in previous Congresses, no such legislation has been introduced in the nearly two months since lawmakers reconvened earlier this year.

Said Catholic Advocate's Steele: "Calling [FOCA] his 'top priority' is taking President Obama at his own word. Finally, all of the Catholic senators mentioned also sponsored FOCA in the 108th, 109th and 110th Congress (with the exception of John Kerry, who supported it in the 101st, 102nd, 103rd and 110th). None of the senators mentioned have indicated that their support will change." Steele noted that the U.S. Conference of Catholic Bishops is sponsoring a nationwide parish-based campaign in which Catholics are urged to send postcards to members of Congress stating their opposition to FOCA.

"Your gift of $100 will help Catholic Advocate reach as many as 200 more voters," says the Brownback letter. Contributions ranging from $25-$1,000 are solicited, and there is check box for greater contributions. "My good friend, Deal Hudson … is leading the charge to expose these politicians who hide their pro-abortion records behind a 'smokescreen of faith,' " says the letter.

Hudson, a conservative Catholic activist and Republican political operative, heads The Morley Institute for Church and Culture, whose fundraising efforts have been previously subject to scrutiny. In June 2005 The Washington Times reported that Bush administration officials canceled a White House briefing for participants in a Morley Institute golf outing fundraiser. "The White House was not aware whatsoever it would be used in this fashion," a Bush administration spokesperson told the paper at the time. "It's well-established that it's inappropriate for third parties to use the White House for briefings to raise money."

In 2004, Hudson resigned his position as director of Catholic Outreach at the Republican National Committee. NCR reported at the time that Hudson "surrendered" his tenure at New York's Fordham University in the mid-1990s after school officials learned of an inappropriate sexual encounter Hudson, then a professor of philosophy at the Jesuit college, had with an 18-year-old student.