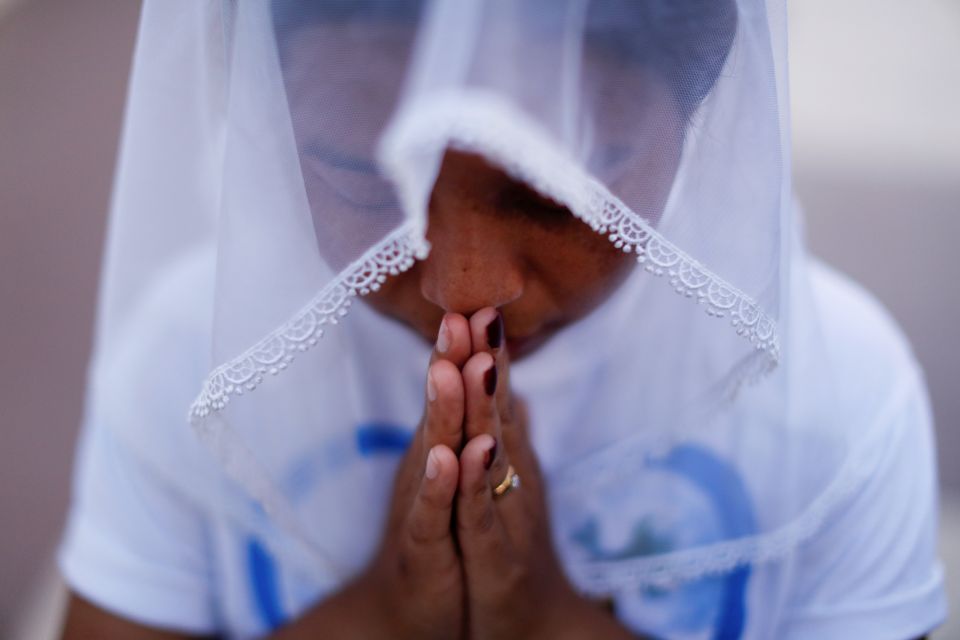 A woman is pictured in a file photo praying at St. Anthony church in Yangon, Myanmar. (CNS photo/Jorge Silva, Reuters)

The latest military assault on Christians in Myanmar's ethnic regions is not the first time the minority has been attacked and targeted. UCA News reported Christians have borne the brunt of the decades-old civil war and faced persecution at the hands of the military, which ruled for more than five decades. The latest attacks have accelerated since the February military coup.

UCA News reported the Chin Human Rights Organization said the junta set fire to houses in Thantlang Nov. 26, with fires burning for three straight days as soldiers continued arson attacks. St. Nicholas was reportedly among dozens of structures to be destroyed by the fire, according to rights group.

The latest attack came within a couple of days of at least 49 buildings, including Thantlang Centenary Baptist Church, being burned to the ground. More than 300 houses, including four churches, have been destroyed by military arson attacks in the town since September.

In the predominantly Christian states of Kayah and Chin, more than 130,000 civilians have been forced to seek refuge in churches, convents and makeshift camps even while the military is targeting priests and pastors, bombing and vandalizing churches, UCA News reported.

Chin state is 85% Christian and has been the state at the forefront of resistance to the military junta; the military has responded with fierce attacks, including air strikes, heavy artillery and indiscriminate attacks on civilians. Hundreds have been arbitrarily detained and dozens killed. The Chin Human Rights Organization said at least 22 churches were burned or destroyed by the military along with more than 350 civilian homes in the state between August and November.

Church leaders, including Pope Francis, have called for the military not to target religious buildings, as places of worship are the cultural property of a community covered by international protocols.

After the military shelled Sacred Heart Cathedral in Pekhon, in Shan state, three times in five months, Bishop Peter Hla pleaded with the military to stop.

Since the conflict escalated in May, Pekhon Diocese is one of the worst-affected areas, along with Loikaw Diocese in Kayah state, UCA news reported.