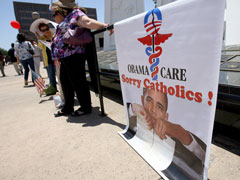 A posted sign is seen during the "Stand Up for Religious Freedom" rally to stop the Health and Human Services mandate in Santa Ana, Calif., June 8. (Newscom/ZUMA Press/Ana P. Gutierrez)

WASHINGTON -- Will religious voters have clout in November's presidential election? Will the Fortnight for Freedom called for by the U.S. bishops June 21 to July 4 become a political movement? Will it affect the Catholic vote? "We don't know yet," said one noted Catholic observer of U.S. politics, but he admitted to being concerned.

Questions of religious freedom and the recent U.S. Health and Human Services mandate on contraceptive health care coverage occupied a central place May 30 in wide-ranging panel discussions for Catholics and evangelicals on the approaching presidential election.

Both the U.S. Catholic bishops and the Obama administration came under heavy criticism for the postures they have adopted in the current standoff over the HHS rules.

Dionne said, "I think there is a substantial minority in the bishops' conference that is either hostile to or highly critical of President Obama -- I've heard estimates around 35 percent of the bishops," he said.

"Speaking from the more progressive Catholic point of view, I'm very worried that this religious liberty focus could be used to push Catholic social justice teaching to the rear and to have a whole new set of issues up front ... in terms of where the muscle of the church and the money of the church gets put," he said.

He said that if the bishops' religious liberty campaigns bring a Catholic voting shift away from Obama by just a few percentage points, it could have a significant effect on the election.

Dionne also said, "Among younger Catholics, I'm very fearful that the church is losing large numbers of moderate and progressive Catholics altogether, and it's something I'd like our bishops to think hard about as they proceed in this election."

The panel also featured Margaret Steinfels, founding codirector of the Fordham Center on Religion and Culture in New York, and before that editor for 15 years of Commonweal; and Michael Gerson, an author, Washington Post columnist and former speechwriter for President George W. Bush whom TIME magazine once called one of the 25 most influential evangelicals in America.

Gerson said, "Four years ago Barack Obama set out consciously to fight the long-term trend" of voters who frequently attend church to vote in increasing numbers for Republican candidates. He reached out to churchgoing Catholics and evangelicals and "made marginal gains" with those groups in 2008, he said.

"I think that there is very little evidence right now in the [2012] electoral process that the Obama campaign is fighting that trend," he said.

Instead, he suggested, Democratic strategists seem to be focusing this year on what has been called "the coalition of the ascendant" -- minorities, women, college-educated young people and others who find the growing political-religious alliance on the right distasteful.

Steinfels seconded Gerson's view. "I do not detect that the Obama campaign has yet shown any particular positioning to secure a Catholic or evangelical vote, or the vote of any particular religious group," she said.

"Nor do I detect that the Republicans have such a positioning strategy vis-à-vis Catholicism," she added. "I think they may be hoping that the Catholic bishops will do this for them. ... With a Mormon candidate at the top of their ticket, the Republicans may be very leery of raising any religious questions at all."

The bishops' Fortnight for Freedom plans "seem to have elements that would rally conservative Catholics to Mr. Romney," she said. "The recent filing of multiple legal suits against the HHS mandate by some 40 Catholic organizations would seem to have the [intent] of keeping these mandates before the electorate -- though the electorate may soon weary of the lawsuits, the ins and outs of the controversy, and of the bishops themselves."

She said, "Many Catholics, younger ones in particular, are put off in a serious way by religious leaders involving themselves directly in politics, such as telling us how to vote."

On the HHS contraceptive coverage mandate and the bishops' religious freedom challenge to it, she said, "This is a controversy that neither church nor state needs to have or should be having. ... It seems to me it is imprudent of [the bishops] to have chosen contraception for their battle -- as imprudent as it was for the administration in requiring Catholic institutions to provide it."

He joked that this might be seen as the work of the Holy Spirit, but more likely it's due to the demographic diversity of Catholic voters -- as an overall group they tend to vote just like the rest of the country.

The key issue as the election approaches is that "there could be substantial change at the margins; that is to say, a few points either way could make an enormous difference," he said.

[Jerry Filteau is NCR Washington correspondent. His email is jfilteau@ncronline.org.]

Two generations in a revolutionary dialogue