Catholicism, freedom and the fate of health care reform 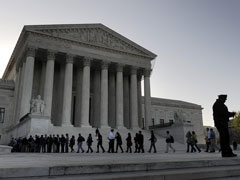 A big brain teaser, to be sure, but one that has very practical consequences. If human freedom is just a capacity to choose, then the individual mandate at the heart of health care law is obviously an arbitrary exercise of government power that should be struck down. As this line of thinking sees it, people should be free to choose, whatever their choices are. The mandate contradicts such freedom by compelling the purchase of health insurance for an already defined purpose: to serve the overall efficiency of the national health care market. Thus this critical view of the mandate thinks: Today the government will compel people to buy health insurance; tomorrow it might be broccoli; the next day, cell phones (to draw on examples used by conservative justices during the health care arguments before the court).

But is this view of the mandate based on the correct meaning of freedom? Of course, the concept of freedom in itself implies a capacity to choose. But, among other traditions, Catholicism has always connected this capacity to context and purpose. So, for instance, we don’t have some pure capacity to choose when and how we’ll become sick or injured. Instead, one of our most important choices involves consenting to the inescapable context of our topsy-turvy mortality. If we view freedom that way, then the mandate can be seen as compelling what would otherwise be a responsible exercise of freedom to purchase health insurance in view of what is already a given. You are born into the health care market. You will get sick or injured and need medical care (if you don’t die suddenly). You will never have comprehensive control over the contingency of such matters.

Moreover, the mandate doesn’t unjustly compel the healthy to subsidize the sick, as if we’re all at most discrete individuals whose responsibility extends only to ourselves and to our immediate family. Rather, the mandate serves as legal recognition of an inalienable human context: We really are connected to each other, even outside the confines of our families, and the greatest efficiencies in the health insurance market follow from linking our freedom to choose to the fate of everyone else in the insurance pool.

Last, the mandate links our freedom to the good of human life -- a value manifest in the nationwide policy that emergency rooms as a last line of care will turn no one away. So long as we as a society have such a policy -- and it is the right policy -- then the mandate works to make such a policy as economically viable as possible by achieving the greatest efficiencies in the health insurance market. The rugged individualist invoking his or her so-called liberty not to buy health insurance is not only freeloading in such a system (others will pay when he or she cannot). But this same person is also choosing not to support a more universal commitment to the good of human life manifest in our commitment to provide fail-safe care to all comers.

The most eloquent recent Catholic statement of freedom’s inherent relation to context and purpose is contained in Pope John Paul II’s encyclical Evangelium Vitae. That encyclical is a favorite of the American Catholic right. It’s an unsurprising shame they won’t turn to the document to support health care reform. But here’s hoping that the Catholic Supreme Court justices with whom reform hangs in the balance -- Kennedy and Roberts especially come to mind -- might consider the strong case to be made that the mandate compels choice but does so in a way perfectly consistent with the context and purpose of human freedom.

Politics | Catholicism, freedom and the fate of health care reform