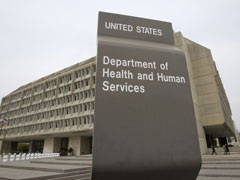 The U.S. Department of Health and Human Services in Washington (CNS/Nancy Phelan Wiechec)

WASHINGTON -- Religious groups -- notably the U.S. Catholic bishops -- felt rebuffed by the Obama administration’s decision not to change a provision in the Affordable Care Act that requires employers to offer contraceptive services in their health care packages without charging copays, coinsurance or deductibles.

Catholic groups, including the bishops, Catholic charities, colleges and universities, and health care institutions, had lobbied hard to have the narrow religious exemption in the rule, which was released last summer, expanded to cover more religious nonprofit agencies.

When the U.S. Department of Health and Human Services announced Jan. 20 that it would not expand the exemption, the U.S. bishops called the decision “literally unconscionable.”

The Health and Human Services rule requires that FDA-approved contraceptive services be included in mandated “preventive services” covered in the basic insurance package of all insurance plans.

A religious organization is exempt if it meets four criteria:


The new regulation does not require coverage of abortions, but -- according to the bishops -- the approved contraceptives would include sterilization and abortifacients, which church teaching forbids.

The U.S. bishops’ conference, Catholic Health Association and Catholic Charities USA called the exemption too narrow and said it would inappropriately involve the government in decisions about whether an organization is “religious enough” to be exempted.

Announcing the decision Jan. 20, Health and Human Services Secretary Kathleen Sebelius said, “This decision was made after very careful consideration, including the important concerns some have raised about religious liberty. I believe this proposal strikes the appropriate balance between respecting religious freedom and increasing access to important preventive services.”

Sebelius also said that nonprofit groups that do not provide contraceptive coverage because of their religious beliefs will get an additional year “to adapt to this new rule.”

Archbishop Timothy Dolan of New York, president of the bishops’ conference, was harsh in his response. “In effect, the president is saying we have a year to figure out how to violate our consciences,” he said.

“The Obama administration has now drawn an unprecedented line in the sand,” he said. “The Catholic bishops are committed to working with our fellow Americans to reform the law and change this unjust regulation. We will continue to study all the implications of this troubling decision.”

Cardinal Roger Mahony, retired archbishop of Los Angeles, urged fighting the ruling “with all the energies the Catholic community can muster.”

Writing on his blog Jan. 20, Mahony said, “I cannot imagine a more direct and frontal attack on freedom of conscience than this ruling today. ... For me there is no other fundamental issue as important as this one as we enter into the presidential and congressional campaigns. Every candidate must be pressed to declare his/her position on all of the fundamental life issues, especially the role of government to determine what conscience decision must be followed: either the person’s own moral and conscience decision, or that dictated/enforced by the federal government.”

“It is this long-standing history that gave us hope that as a religious institution we would be granted the freedom to remain faithful to our beliefs while also being committed to providing access to quality health care for our 70,000 employees and their families across the country.”

Pro-life Democrat Sen. Robert Casey of Pennsylvania said he disagreed with the ruling and had urged the administration to take a different course. “I believe that religiously affiliated institutions like hospitals and universities should not be forced to provide health insurance policies that cover procedures or provide services that are contrary to their religious beliefs. I continue to strongly support and have voted for efforts to provide greater access to contraception because it reduces the number of abortions. However, I believe this is a different issue.”

The progressive political advocacy group Catholics United found “a sliver lining” in the Jan. 20 ruling. “Although we recognize the authority of Catholic teaching on the issue of contraception, we also acknowledge that ... increased access to contraceptive services will dramatically reduce the incidence of abortion in America,” the group’s executive director, James Salt, said. That is goal both sides of this debate should recognize, he said.

Nancy Keenan, president of NARAL Pro-Choice America, praised the Obama administration for resisting “intensive lobbying efforts from anti-birth-control organizations.” She said, “All women should have access to contraceptive coverage, regardless of where they work.”

Sr. Carol Keehan, a Daughter of Charity who is president and CEO of Catholic Health Association, which represents 1,200 Catholic health care providers nationwide, said in a statement that the announcement was a “missed opportunity to be clear on appropriate conscience protection.”

In an email exchange with NCR contributor Michael Sean Winters, Keehan added, “This was a serious disappointment, as respect for conscience was supposedly a given. The vitriol from both sides stunned me. The women’s groups got huge increases in the number of women getting contraceptives free as a great gain, but from their view that was not enough, and their anger at the bishops was stunning.

“The people who wanted no contraception in were equally intense and I think for those of us who wanted simply to maintain the respect for conscience that we felt was a given thought it was the simple middle ground and were stunned to find no give to conscience. It was for us not so much about contraception as about conscience protection.”

The president of Catholic Democrats, Patrick Whelan, a doctor and member of the pediatrics faculties at Harvard Medical School in Boston and the Keck School of Medicine of at the University of Southern California in Los Angeles, said in a statement that because of the rule “more women will have access to the kind of health care that has been denied to millions over the years because of the high cost.”

Greater access to contraceptives will help reduce the number of unintended pregnancies and “correspondingly are likely to further decrease the incidence of abortion,” said Whelan, who is also an NCR board member.

“I am aware that some Catholics will hear this news with mixed or negative emotions, including many bishops. At the same time, we know Catholic women, and by extension their families, use oral contraception at the same rate as the overall population.”

“Catholics and Catholic theologians” have taken issue with the church’s anti-birth-control teaching for more than 50 years, he said.

“Today, many will use this decision to further their own political agenda. The need for the hierarchy, theologians and the laity to come together and discuss these important issues has never been more pressing.”