Chaput: We will lose religious freedom if we don't fight for it 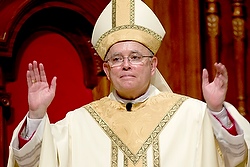 Archbishop Charles J. Chaput at his Mass of installation in Philadelphia in 2011 (CNS/Nancy Wiechec)

INDIANAPOLIS -- "Unless we work hard to keep our religious liberty, we are going to lose it," Archbishop Charles Chaput of Philadelphia told members of the Catholic Press Association on the eve of the Fortnight for Freedom, the 14-day period beginning Thursday that will focus the attention of the Catholic community on what the bishops say is government intrusion on religious conscience, beliefs and practices.

"Nothing guarantees our freedoms except our willingness to fight for them," Chaput said, saying that "means fighting politically and through the courts without tiring and without apology."

The Fortnight for Freedom was introduced in a March document from the bishops' conference administrative committee titled "Our First, Most Cherished Liberty" in which they urge laity to work to protect religious freedom in the United States.

The document lists some examples of religious practice and beliefs under attack, including:

"Tomorrow we start a Fortnight for Freedom," Chaput said Wednesday, delivering the first keynote address at the 2012 Catholic Media Conference. "It is a moment for each of us to be grateful to our bishops for doing the right thing ... at the right time. If we don't press now and vigorously for our religious liberty in the public arena, we will lose it. Not overnight, not with a thunderclap, but step by step."

"Each of you plays a key role, a vital role in this effort, because our prestigious news media, with a very few exceptions, won't cover this issue in a fair and comprehensive way," he said.

Chaput said the hostility stems from the church's teaching on the sanctity of life and sexuality. He said critics of the church reduce all these moral convictions to an expression of a subjective religious belief, and if they are purely religious beliefs, critics say they can't be rationally defended. And because they are not rationally defensible, they should be treated as a form of prejudice.

When religious belief gets redefined as a private bias, religious identity and institutional ministry have no public value other than the utility of getting otherwise incredulous people to do good things, he said. So exempting Catholic adoption agencies with gay couples becomes a concession to private prejudice, and that becomes bigotry that hurts the public, "or so the reasoning goes."

"This is how moral teaching and religious belief gets counted as hate speech," he said.

"That is the reason Pope Benedict calls us a year of faith this October," he said. "The worst enemies of religious freedom aren't out there among the legion of critics that hate Christ or the Gospel or the church or all three -- the worst enemies are in here. It is us. All of us. It is the clergy, religious and lay when we live our faith in tepidness, routine and hypocrisy."

"Religious freedom is not a privilege granted by the state," Chaput said. "It is our birthright as children of God. ... We need to become people worthy of it, which means we need to change the way we live. Radically change. Both as individual Catholics and as the church."

Politics | Chaput: We will lose religious freedom if we don't fight for it

Your thoughts on despair, abortion laws, married priests and more

Looking forward to policing the culture of the church in 2017