by Elizabeth A. Elliott
Politics 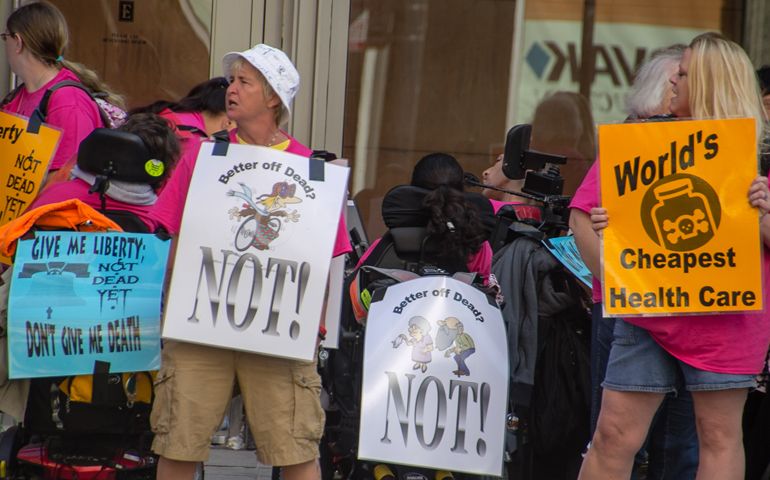 Members of Not Dead Yet and other disability rights activists hold a vigil Sept. 19, 2014, in Chicago, outside a conference held by the World Federation of Right to Die Societies. (Carrie Ann Lucas)

Editor's note: The following story originally appeared in the Pro-Life Special Section of the NCR print issue dated Jan. 1-14, 2016. We are providing special access of the full story to you, our online readers. This is a sample of the kind of specialized reporting exclusive to NCR's print subscribers. Subscribe now to our print and Kindle editions.

In the lexicon of the medical world, a terminally ill patient choosing to die can do so by different terms -- death with dignity, assisted suicide, or aid in dying.

Four states -- California, Oregon, Vermont and Washington -- have legalized the practice through legislation. California joined this group in October. A Montana state Supreme Court ruling in 2009 found no bars to terminally ill patients seeking physician-assisted death, effectively legalizing the practice, but it is not protected by a specific statute.

Supporters of such legislation hope to see their success spread to other states, saying that offering the option of aid in dying is an act of compassion that can relieve the suffering of those who have a terminal illness.

Opponents, including the Catholic church and disability rights groups, counter that there are no safeguards to prevent coercion and the practice violates the rights of the disabled. Despite their recent defeat in California, opponents are determined to continue to battle aid-in-dying laws.

"The term 'death with dignity' implies there is something inherently undignified about a natural death," said Dennis Poust, director of communications for the New York State Catholic Conference. "There are no safeguards to prevent coercion to take the drugs once they've been prescribed. There are no safeguards to prevent people suffering from depression from taking these drugs at a time of despondency."

State legislation is often modeled on the Death with Dignity Act that legalized aid in dying in Oregon in 1997. That law allows doctors to prescribe a lethal dose of medication to patients who have six months or less to live. As opposed to euthanasia, where the doctor administers the lethal dose, patients must perform the life-ending act.

The law says that patients must be 18 years or older, be capable of making and communicating health care decisions for themselves and have a terminal illness with six months or less to live.

A patient must make two oral requests of their doctor 15 days apart, and a written request must be signed in the presence of two witnesses, at least one of whom is not a relative. Because the patient has to make the request, a family member cannot make the request on behalf of someone who is comatose, for example.

In Oregon, the doctor must inform the patient of other options, such as hospice or pain control.

The laws have muddied the definition of suicide. Sean Crowley, media relations director for Compassion & Choices, notes, "If a terminally ill person utilizes medical aid in dying to end an unbearable dying process, the death certificate does not say the cause is 'suicide.' It says the cause is the underlying terminal illness."

Maryland State Delegate Shane Pendergrass, a Democrat, has proposed a bill to legalize aid in dying in her state. "This seems like an obvious opportunity to respect a patient's personal decision to control the last bit of his life and keep the government out of his sick room," she said.

The bill, "End of Life Option Act," is modeled after those of Oregon, Vermont and California. Pendergrass plans to introduce it in January.

According to Sandeen, about 80 percent of people who have taken advantage of the law in Oregon and Washington had been diagnosed with cancer, and they were a median age of 72 and an even split between men and women. She added that the majority were white, had insurance and medical care, and about 90 percent of the patients were enrolled in hospice.

"The misconception is these people are seeking to end their lives instead of getting treatment," she said. "Instead, they have received good quality end-of-life care."

Opponents, however, charge that the laws violate the rights of the ill and disabled and are ripe for abuse.

"We believe that all the ill and disabled people should have the same suicide prevention as everyone else," said Diane Coleman, president and CEO of Not Dead Yet, a disability rights group.

The group believes that the laws violate the Americans With Disabilities Act "by creating that double standard where most people get suicide prevention but certain people will get suicide assistance instead," Coleman told NCR.

She said it is common for the disabled to be told they have only a few months to live, but that doesn't always turn out to be true.

"We don't buy the idea that doctors can render a prognosis of any reliability six months out and that's what these laws are based on," she said.

All of the bills modeled on the Oregon law have flaws, according to Bradley Williams, president of Montanans Against Assisted Suicide, such as that someone who claims to know how you communicate can speak for you.

"A single predatory heir can steer the signup process and administer the lethal dose without oversight or witness so no one knows if it is self-administered or not," Williams said.

He said that in Oregon the most important reason people mark on end-of-life records is fear of lack of autonomy, with pain being the last reason.

"They are establishing that euthanasia for the sake of fear of lack of autonomy is becoming the standard of care," he said.

The U.S. Catholic bishops issued a statement in 2011 called "To Live Each Day With Dignity," which called the "choice to take one's life … a supreme contradiction of freedom, a choice to eliminate all choices. And a society that devalues some people's lives, by hastening and facilitating their deaths, will ultimately lose respect for their other rights and freedoms."

The statement warns of the vulnerability of people who request death; such people need care and protection, it said. "To offer them lethal drugs is a victory not for freedom but for the worst form of neglect. Such abandonment is especially irresponsible when society is increasingly aware of elder abuse and other forms of mistreatment and exploitation of vulnerable persons."

The Catholic church was prominent in the fight against California's End of Life Option Act, which Gov. Jerry Brown, who is Catholic, signed into law Oct. 8. In its campaign against the bill, the California Catholic Conference, the public policy arm of the state's bishops, had worked with Californians Against Assisted Suicide and their partners in the disability rights community.

"This bill does nothing to validate the lives of the vulnerable," the state conference said in a statement soon after Brown's action. The legislation "isn't compassion," the statement said.

"As Catholic bishops in California, we join hands with the disability rights groups, physicians, other health care professionals and advocates for the elderly in opposing physician-assisted suicide as the wrong way to advance the human dignity for those facing a terminal illness," the statement said.

According to Sandeen of the Death with Dignity National Center, Brittany Maynard, a 29-year-old woman diagnosed with terminal brain cancer, "changed everything about our movement." Maynard's move from California to Oregon in 2014 to take advantage of the death-with-dignity act drew international media attention.

"Maynard did two things: She spent quality time with her family and she became an advocate to bring death with dignity to all states," Sandeen said. "She thought it was unfair and even unethical that she was forced to move to Oregon to be able to take control of the time and manner of her death."

Crowley of the Denver-based Compassion & Choices, which works "to protect and expand options at the end of life," according to its website, noted, "Just three months after Brittany Maynard's story went viral in October 2014, 25 states and the District of Columbia considered death-with-dignity bills during the 2015 legislative sessions."

Once legislation passes, it depends on the state laws as to when it will go into effect. People who work to see the law pass may not get to take advantage of it.

"We have an advocate in San Diego who worked to bring death with dignity to California and it's very difficult for him to realize he won't be able to take advantage of the law, that his terminal illness will take him before the law starts," Sandeen said.

"I think the next forefront of the death with dignity policy reform movement will be in New York," said Sandeen. "It's time to bring it the Eastern Seaboard and New York is the place to do that."

The New York State Catholic Conference has joined a coalition to oppose two bills, according to Poust. The state conference is working with the New York Coalition Against Assisted Suicide, disability rights groups, evangelical Christian churches, and patients' rights groups.

"Polling data indicates that religious arguments are not the most persuasive," Poust noted, "which is why we are so happy to have the support of the disabilities rights folks, as well as the New York Medical Society, the Hospice Association and others."

He said New York ranks 48th in the nation in terms of hospice utilization and the state Catholic conference is urging the legislature to put more resources into palliative and hospice care.

"People should not have to fear a painful death when the care and the drugs exist to keep them comfortable," Poust said.

Catholic school welcomes girl and service dog, after public school kicks them out

Half of US states consider right-to-die legislation