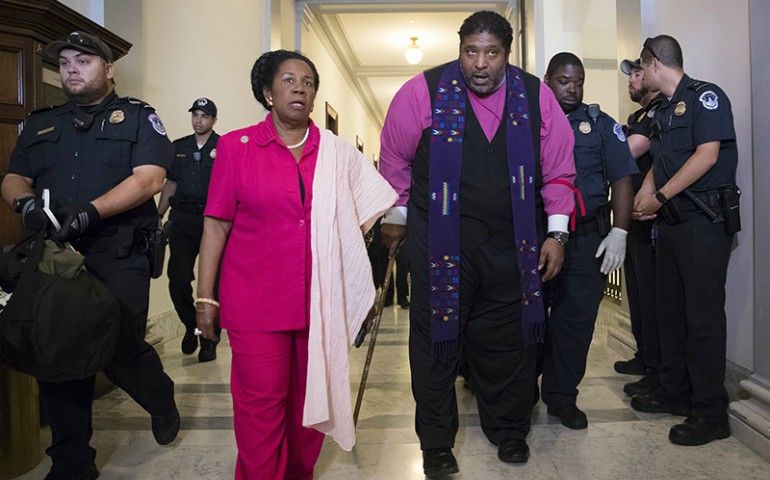 About 50 protesters gathered July 13 for the Capitol Hill rally, before marching to a Senate office building steps from the Capitol.

Some protesters wore red armbands to symbolize a "willingness to engage in civil disobedience," said Barber, a North Carolina pastor at the forefront of state and national protests focused on poverty and civil rights.

"Call your God who your God is: capitalism" pic.twitter.com/WvU0okh0y0

The group was warned three times to stop protesting. Capitol Police then closed off the hallway and arrested any remaining protesters about 20 minutes later.

Barber has repeatedly been arrested for civil disobedience in North Carolina and elsewhere.

Protesters said they want McConnell to know it's immoral to cut Medicaid because it helps many children, seniors, and disabled persons.

They timed their march with the unveiling of the GOP health care bill, which would repeal and replace President Barack Obama's Affordable Care Act. Critics of the GOP effort, which has run into road blocks this spring and summer, say it will undermine the poorest and most vulnerable Americans.

At the rally, Barber called others of faith to action.

"We're saying today it's time for other clergy to come," he said. "It's time for moral agents to step up. It's time for us to go down to the house of power and challenge the way power is being used."

Upon reaching McConnell's office, Barber, the Rev. Jennifer Butler, CEO of the nonprofit Faith in Public Life, and the Rev. Traci Blackmon, of the United Church of Christ, spoke to the crowd.

Following the arrests, some of the remaining protesters gathered out front for prayer.

Ruling against sisters latest, not last action in Obamacare cases