Commentary: Fortnight for Freedom based on outdated theology 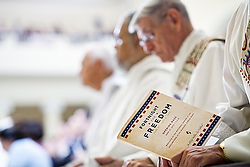 A member of the clergy holds a program during the opening Mass for the U.S. bishops' Fortnight for Freedom campaign June 21 at the Basilica of the National Shrine of the Assumption of the Blessed Virgin Mary in Baltimore. (CNS/Catholic Review/Tom McCarthy Jr.)

Before the Second Vatican Council, the Catholic church followed a "double standard," wrote Fr. John Courtney Murray, the Jesuit architect of the Council's 1965 Constitution on Religious Freedom (CRF). He continued: The Catholic church calls for "freedom" for the church "when Catholics are a minority, privilege for the church and intolerance when Catholics are a majority." This Constitution, Murray wrote, "has opened a new straightforwardness in relationship between the church and the world." (Abbot, W., Ed., The Documents of Vatican II, Guild Press, NY, NY, 1966, p. 673)

Yet this year, when the United States Catholic Conference of Bishops decided to reject the Health and Human Services mandate-compromise to have insurance companies pay for free contraceptives and sterilizations for all women under the health insurance policies of Catholic hospitals, universities and social agencies, they bypassed the "new straightforwardness" of the 1965 Constitution to return to the old "double standard" of the 500 years of the Inquisition and the 300 years of the Holy Office theology (1123-1965).

The Catholic church defined "objective truth." If non-Catholics did not accept these truths, they were in error. Thus, a person in error had no right of conscience that the church needs to respect. This old traditional theology did not accept that the right of private conscience dwelt in all human persons because of their human dignity, as the 1965 Constitution does. Are the bishops using this old theology to deny non-Catholics their right of conscience?

Since Catholics are a minority of Americans, the bishops call for freedom from the HHS mandate under the First Amendment of the U.S. Constitution, but when they are the majority of employees at Catholic hospitals, universities and social agencies, the bishops claim privilege for the latter institutions by being relieved of the effects of the HHS mandate and practice intolerance against non-Catholic women employees (other Christians, other faiths and nonbelievers) by denying them their right of private conscience to receive free contraceptives and sterilization surgeries under the 2010 Affordable Care Act.

The bishops' conference had merely to go to the 1965 Constitution on Religious Freedom to resolve the problem of the HHS mandate given to Catholic institutions. The constitution says: "The Vatican Synod declares that the human person has a right to religious freedom. This freedom means that all [people] are to be immune from coercion on the part of individuals or of social groups and of any human power ... to act in a manner contrary to his own beliefs." (1965 Constitution on Religious Freedom, para. 2, p. 678-9) Thus, the bishops cannot coerce non-Catholic women employees in Catholic institutions by denying them their right to their private conscience to receive free contraceptives and sterilizations under their health policies. This creates a dilemma -- the conscience of Catholics vs. the conscience of non-Catholic employees.

The 1965 Constitution foresaw this dilemma. "[The] government is to see to it that the equality of citizens before the law ... is never violated for religious reasons. ... Nor is there to be discrimination among citizens." (CRF, para. 6, p. 684-5) "These [governmental] norms arise out of the need for effective safeguard of the rights of all citizens and peaceful settlement of conflict of rights. (CRF, para. 7, pg. 686-7) The bishops did not understand that, due to this conflict of rights, the HHS mandate was given to Catholic institutions "to safeguard the rights of all citizens" --- Catholic and non-Catholic.

Unfortunately, the bishops' conference has adopted the "double standard" of the pre-Vatican II theology, rather than resolving the conflict of rights issue of the HHS mandate by following the directions of the 1965 Constitution on Religious Freedom and its "new straightforwardness."

The bishops' present militant campaign, Fortnight For Freedom, is a misguided and arrogant attempt to bludgeon our government into submitting to their interpretation of the right of private conscience of Catholics and to discriminating against the private conscience of non-Catholic women employees in Catholic institutions. This campaign is based on an out- dated theology that was changed and developed into a new theology in the 1965 Constitution.

[Fr. Edward J. Ruetz is a retired priest from the Diocese of Fort Wayne/South Bend, Ind.]

Politics | Commentary: Fortnight for Freedom based on outdated theology

Paul Ryan to get another earful on his 'Catholic' budget