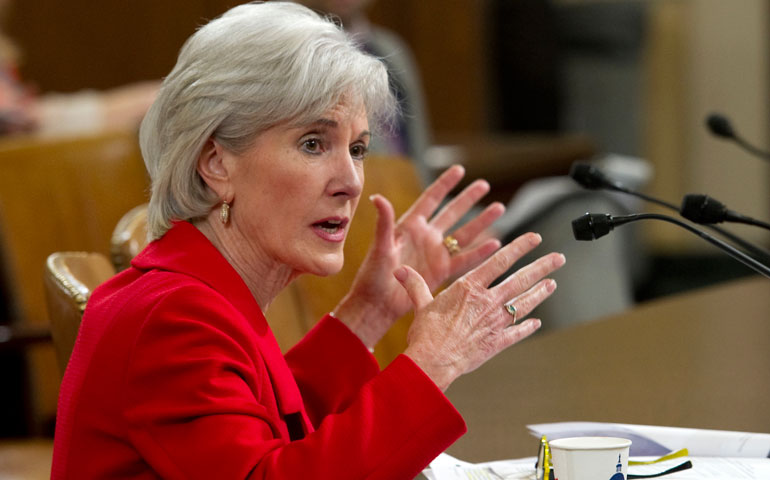 April 8, the last day that the public could file comments with the U.S. Department of Health and Human Services on the contraceptive coverage in its health insurance mandate, Secretary Kathleen Sebelius was addressing students at the Harvard School of Public Health.

She told them she had not anticipated how complicated it would be to implement the Affordable Care Act, the president's signature health care law.

"The politics has been relentless and that continues," Sebelius was quoted by Reuters as saying. "There was some hope that once the Supreme Court ruled in July, and then once an election occurred there would be a sense that, 'This is the law of the land, let's get on board, let's make this work.' And yet we will find ourselves having state-by-state political battles."

The final rule implementing the mandate could be announced at any time. The mandate will take effect Aug. 1 as planned, Sebelius told her Harvard audience.

Some of the fiercest battles have been with religious organizations that have objected to the mandate as a violation of their teachings against the use of contraceptives.

The U.S. Conference of Catholic Bishops filed its comment in March. The bishops still object to the narrow definition of "exempt" institutions, insisting, "The current proposal continues to define 'religious institution' in a way that, by the government's own admission, excludes (and therefore subjects to the mandate) a wide array of employers that are undeniably religious. Generally, the nonprofit religious organizations that fall on the 'non-exempt' side of this religious gerrymander include those organizations that contribute most visibly to the common good through the provision of health, educational, and social services."

The bishops' conference also expressed dissatisfaction with the means by which Health and Human Services treats religious institutions that are not exempt but will receive an "accommodation" from the rule.

The bishops' conference also continued its call for the exemption to be extended to private, for-profit employers if they object to providing the mandated coverage.

The Catholic Health Association delivered its comments to Health and Human Services in early April. The association applauded the administration's decision to scrap an earlier iteration of the rule that contained a four-part definition of an exempt religious institution.

The health association praised Health and Human Services for making the self-certification procedures to qualify for the accommodation simple and clear.

The association did request that language in the preamble to the rule be included in the actual text: "CHA supports the proposal that the eligible organization complies with the contraceptive mandate upon presenting the self-certification to the health insurance issuer. The Department explains in the preamble that, having thus complied with the mandate, the eligible organization would be held harmless should the health insurance issuer fail to provide separate contraceptive coverage as required by the proposed rule. CHA suggests that this further clarification be added to the language of the final rule."

The association repeated its belief that the administration could eradicate the controversy by adopting other conscience language in the federal code. "While we appreciate the efforts the Administration is making to respond to the concerns of religious organizations, we still believe the best course is to adopt an expanded definition of religious employer using the concepts of Section 414(e)," the comment says (emphasis in original).

Kristina Arriaga, executive director of the Becket Fund, a group that focuses on religious liberty issues, told NCR that her organization remains skeptical of the current proposals.

"HHS has mandated that American employers include all FDA-approved contraceptives in their group health plans without cost-sharing," Arriage stated in an email. "HHS' mandate covers contraceptives like ella and IUDs that work after conception to end newly-created human life, and HHS knew when it issued the mandate that many Americans -- both Catholic and non-Catholic -- have serious moral objections to these drugs."

Arriaga echoed the bishops' dissatisfaction with the proposed "accommodation" and placed the entire debate in the broader context of religious liberty.

"The government is still trying to force many believers to pay for or facilitate access to abortion-causing drugs in ways their religion prohibits. What each organization's religion permits is not the government's call to make. It belongs to each religious group," Arriaga said.

The proposed rule, however, was designed to ensure that religious organizations do not have to "fund" or "facilitate" the coverage to which they object. The mandate is applied to the insurance company of an objecting religious employer. When asked about this, Arriaga explained that the administration's proposal failed to achieve its stated goal.

"The employer is forced, by law, to provide an insurance policy and connect the employee to the insurance company," Arriage explained. "That act -- providing the policy -- automatically triggers the right to the objectionable services. Nor is the employer free to just avoid offering insurance -- that would trigger massive government fines. So the religious employer is forced, by law, to engage in an action (offering health insurance) which automatically triggers the flow of drugs and devices that can end a human life. Many religious people reasonably understand this to be facilitating access to the drugs."

Nicholas Cafardi, dean emeritus of the Duquesne University School of Law, told NCR that he was surprised the lawyers at the bishops' conference and Catholic Health Association took such divergent views of the proposals.

"On the same point, the Catholic hospitals' lawyers say, 'The issuer (i.e. the insurance company) would be required to automatically provide contraceptive coverage under a separate health insurance policy for plan participants and beneficiaries and may not impose any cost sharing requirement, premium, fee or other charge, directly or indirectly, on the eligible organization (i.e., the Catholic hospital, university, etc.) the group health plan, or plan participants or beneficiaries.'

"Now lawyers may differ about the meaning of government regulations and still be correct in a sense, but not this much. These are black-and-white readings of the same regulatory language. One side has to be wrong, and the other right, and I think the Catholic hospitals' lawyers have it right and the bishops' lawyers don't. I can't see how they get the meaning that they do from the proposed regulations," Cafardi said.

Sources close to the negotiations with the White House predict that the administration is not likely to change its current method of differentiating between "exempt" institutions and those that are given an "accommodation." After the latest rules were proposed in February, Bishop Robert Lynch of St. Petersburg, Fla., wrote on his diocesan blog that "it is a distinction without a difference."

Still, most expect the lawsuits challenging the mandate to proceed once the administration finalizes the rule.

Fifty-two suits have been filed against the government on account of the mandate, with mixed results for suits brought by for-profit employers. Pending Health and Human Services' issuance of the final rule, the courts have deferred most of the lawsuits brought by nonprofit religious organizations.

[Michael Sean Winters writes about religion and politics on Distinctly Catholic, which was the first-place finisher for Best Individual Blog in the 2012 Catholic Press Association competition.]

A version of this story appeared in the Apr 26-May 9, 2013 print issue under the headline: Commenting period ends for HHS mandate.