Congress takes on legislation to loosen access to guns 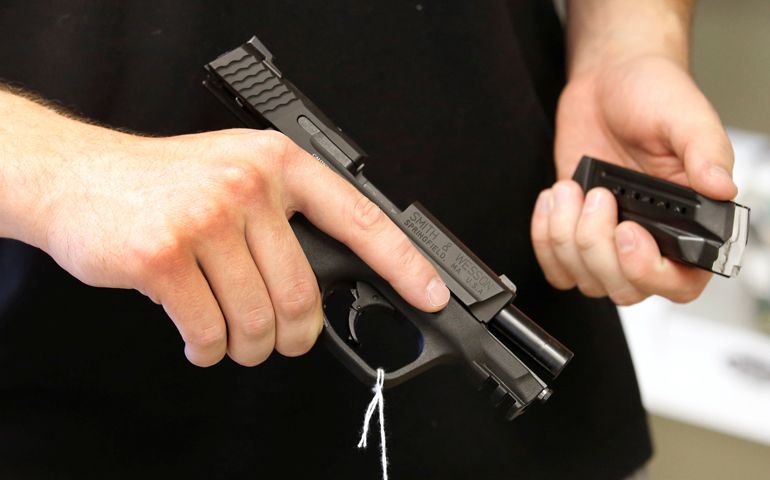 A salesman holds a Smith & Wesson handgun and magazine at the Ready Gunner gun store in Provo, Utah. (CNS/Reuters/George Frey)
This article appears in the Gun Violence feature series. View the full series.

Since the 115th Congress opened in January, several pieces of legislation are making their way through the legislature with the aim of amending or repealing laws and regulations that have kept people with mental disabilities from buying guns.

One piece of gun legislation has been adopted this year. President Donald Trump signed H.J. Res. 40 Feb. 28, about a month after Rep. Sam Johnson of Texas introduced it to the House. The joint resolution nullifies a rule, finalized in December 2016 by the Social Security Administration, that allowed the release of names of Social Security beneficiaries to the FBI's National Instant Criminal Background Check System if the beneficiaries had been determined to be mentally incapable of managing their own affairs. The resolution nullifies that rule, which would have made beneficiaries ineligible to purchase or possess a firearm.

Supporters of the bill say this legislation would help remove the stigma of mental illness.

The Brady Campaign to Prevent Gun Violence and the organization Everytown for Gun Safety oppose the bill, citing the already high suicide rate among veterans, which numbers 20 deaths per day according to statistics from the Veterans Affairs Suicide Prevention Program.

The Veterans Coalition for Common Sense, a network that advocates for reducing gun violence, sent a letter to House and Senate leaders urging them to oppose the bill. David Petraeus, former CIA director and retired Army general, and retired Gen. Stanley McChrystal, former commander of the Joint Special Operation Command, were among the 14 veterans who signed the letter.

Twin bills recently introduced into the Senate and House, the Constitutional Concealed Carry Reciprocity Act of 2017 (S. 446) and the Concealed Carry Reciprocity Act of 2017 (H.R. 38), would allow a person who has a permit to carry a concealed firearm in one state to carry the gun while visiting another state that allows concealed carry. The Senate bill would in fact make this a constitutional right.

Lindsay Nichols, senior attorney for the Law Center to Prevent Gun Violence, argues both pieces of legislation would make it difficult for law enforcement to recognize who's dangerous and who's not.

"The public hasn't really heard how chaotic the system will be if states are forced to recognize people entitled to carry guns in public under other states' laws," she said.

A final piece of legislation that is quickly picking up co-sponsors in the House is H.R. 367, or the Hearing Protection Act of 2017, which would repeal and replace a law that has regulated ownership of gun silencers since 1934. If enacted, the law would eliminate a federal waiting period to purchase silencers and remove a $200 transfer fee on them. Silencers don't actually silence gunshot sounds, but rather muffle them.

Gun advocates say this legislation would protect hunters and recreational shooters from ear damage while eliminating the need to wear hearing protection.

Nichols says silencers on the weapons of criminals make it more dangerous for law enforcement officers arriving at a shooting scene.

"It would be difficult for people to recognize the sound," she said.

Nichols said she thinks all of these pieces of gun legislation pose potential dangers to public safety. "None of them would solve gun violence in this country," she said. "They're all weakening our national gun laws rather than strengthening them."

Politics | Congress takes on legislation to loosen access to guns