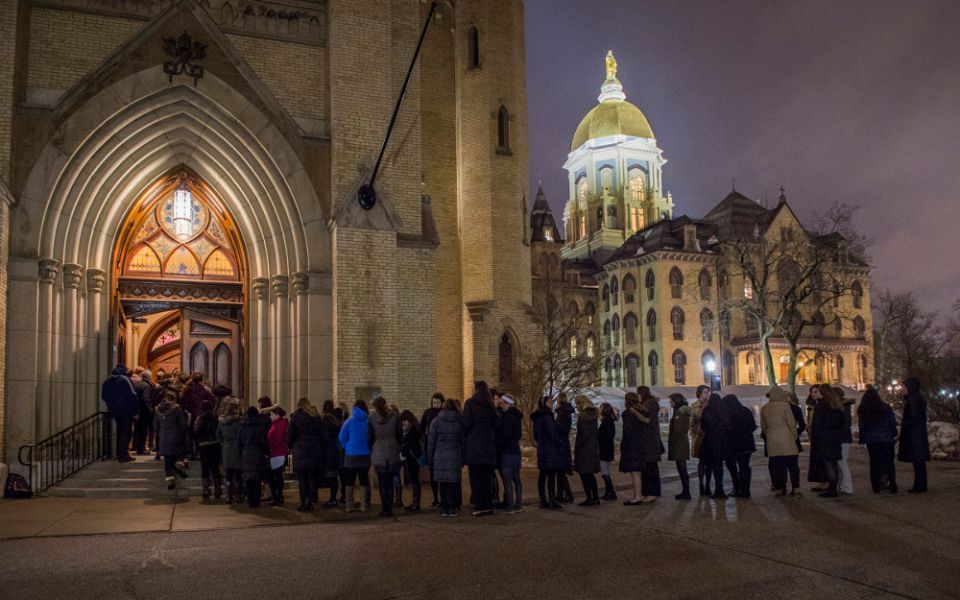 The University of Notre Dame changed its mind again earlier this year. Holy Cross Fr. John Jenkins, the school's president, addressed a letter to the university community in February stating Notre Dame would offer contraceptives through its university health care plan, except for what he termed abortion-inducing drugs. Since 2013, the university has gone from opposition to offering contraceptive coverage, to allowing them through a third party, to ending the third-party coverage, to bringing it back fully, to, now, somewhere in the middle, causing consternation among students, faculty and alumni.

And it all began with a mandate from the federal government and a legal challenge from the university.

In the last few years, many notable Catholic colleges and universities have fought similar battles. Some, like Notre Dame, argued against the Affordable Care Act rule regarding contraceptive coverage in health insurance plans, while others targeted gender equity components of Title IX requirements, labor rulings, and the application of discrimination statutes. The common thread among the schools is their attempt to be exempt from mandates and laws they claim conflict with their Catholic missions.

Though moves by the Trump administration have soothed some of these concerns, increasingly progressive Catholic constituents and the likelihood of Title IX and anti-discrimination regulations expanding in the future could place Catholic institutions of higher education in vulnerable positions, testing the importance they attach to conserving their Catholic identities and whether law will back them up.

"They sort of feel the world shifting underneath them," said Mark Goldfeder, the Spruill Family Fellow in Law and Religion at Emory University.

The universities that have mounted challenges span a wide spectrum, big and small, urban and rural, traditionally conservative and closer to the middle.

Notre Dame was joined by several smaller colleges and universities, such as Belmont Abbey College in Charlotte, North Carolina, in separately filing lawsuits against the federal government from 2011 to 2013 after a provision in the Affordable Care Act required religious universities to cover contraceptives through a third party.

Since 2012, Duquesne University in Pittsburgh has challenged the jurisdiction of the National Labor Relations Board after adjunct professors sought to unionize, becoming the second high-profile Catholic school to do so recently after Manhattan College in New York. And in Philadelphia, Chestnut Hill College, run by the Sisters of St. Joseph, has questioned whether state anti-discrimination laws apply to it after a charge of racism.

Paula Moore, vice president for external affairs of the Association of Catholic Colleges and Universities, said the organization has provided financial assistance for legal issues to at least a half-dozen institutions in recent years and unofficial aid in many other cases.

Results have been mixed. Chestnut Hill failed at the trial and appeals level and now faces a public hearing if mediation efforts fail. Notre Dame's and Belmont Abbey's lawsuits over the contraceptive coverage mandate were still winding their way through the legal system before the Trump administration made them unnecessary, for now, by providing religious exemptions for universities. Duquesne's fight has gone on for five years, the university not prepared to back down after the labor board ruled it was subject to its jurisdiction.

Duquesne and Chestnut Hill have claimed their First Amendment rights were under attack in their challenges. The other common tactic for religious universities — only on the federal level — regards seeking protection under RFRA, the Religious Freedom Restoration Act. It was passed in 1993 by a unanimous House and a 97-3 vote in the Senate. The religious freedom act gives organizations like Catholic universities the opportunity to challenge the federal government if they believe a law imposes a substantial burden.

Marc DeGirolami, associate director for the Center of Law and Religion at St. John's University in New York and author of The Tragedy of Religious Freedom, said courts have set a high standard for this burden, with lower courts recently likely to decide against religious institutions.

Some say the pressure on religious organizations increased under the Obama administration, which expanded Title IX, introduced the contraceptive mandate and endorsed a regulation allowing transgender students to use bathrooms corresponding to their identities.

"This was felt to be a change, a major change," DeGirolami said, "and as a result you had major resistance."

The 2015 U.S. Supreme Court ruling in Obergefell v. Hodges, the case that legalized same-sex marriage, raised considerable concerns among religious educational institutions. During oral arguments, Justice Samuel Alito questioned Donald Verrilli, then the U.S. solicitor general, as to whether religious universities could conceivably lose their tax-exempt status for having internal policies opposed to same-sex marriage. Verrilli responded, "It's certainly going to be an issue. I don't deny that."

Then Donald Trump got elected president with strong backing from religious values voters, especially white evangelicals but white Catholics as well. Many felt it was necessary to vote for Trump "in order to protect themselves," said Bruce Ledewitz, a law professor at Duquesne and author of Church, State, and the Crisis in American Secularism.

In addition to allowing exemptions for the contraceptive mandate, the Trump administration released a memorandum on religious freedom emphasizing, among other things, that religious institutions could hire based on their beliefs.

The administration, led by Education Secretary Betsy DeVos, is expected to limit the scope of Title IX and other anti-discrimination laws and has withdrawn gender identity guidelines and sexual assault reporting measures set under former President Barack Obama. When discussing gender identity earlier this year, an Education Department spokesperson said, "The secretary would contend that it is the job of Congress or the courts, not the bureaucracy, to determine whether or not the term 'sex' under Title IX encompasses 'gender identity.' "

"What they're saying is, 'We want to have a seat at the table, but you as a player recognize us as a Catholic institution. Don't consider us like any other college.' "

What is at stake

But changes under Trump don't mean the end of religious challenges. As Notre Dame showed, the debate continued after Trump relaxed the Obama mandate. That's because the question of whether a Catholic university has a decent legal argument is different than a religious justification, one that can prove more controversial among a university's community.

Whether the issue is contraceptives, gender identity or labor, schools filing lawsuits tend to claim their Catholic identities and missions are at stake. In 2013, when Notre Dame filed its lawsuit, Jenkins was asking the government to "not impose its values on the university when those values conflict with our religious teachings." Catholic doctrine forbids the use of artificial contraception. Though few Catholics follow the dictum, the contradictions with Catholic teachings were clear.

The cases Duquesne and Manhattan College are trying to build have left legal scholars like Ledewitz scratching their heads. Catholic social teaching supports the ability of workers to unionize, but the colleges, seemingly, are seeking protection from that.

When asked about this, a Duquesne spokesperson said that "our mission and identity are incorporated into all that we do — not 'siloed' in one course or department," but declined to make officials available for an interview.

"I'm not saying the university is legally wrong. They may be legally right," Ledewitz said. "The justification is just nonsensical. The terms of labor law just don't have anything to do with a university's Catholic identity that I can understand. The NLRB would never tell a teacher what to teach or how to teach."

Similar questions arose at Chestnut Hill College. In 2015, the Pennsylvania Human Relations Commission, which enforces state anti-discrimination laws, found in a ruling of probable cause that Chestnut Hill had discriminated against a black student it expelled for allegedly stealing funds from a play. 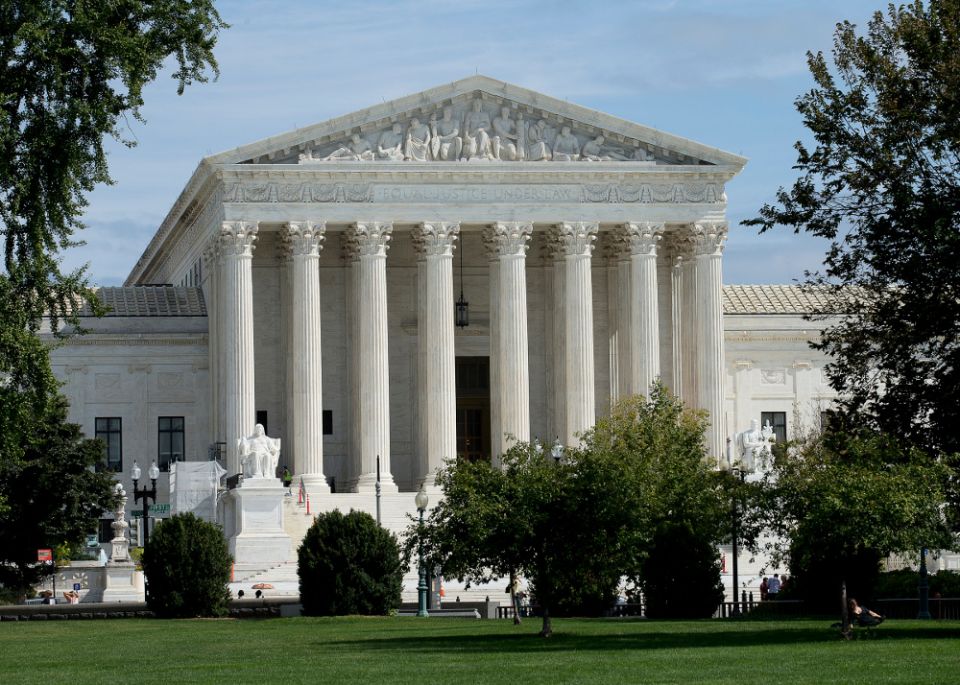 The college filed a lawsuit, questioning whether the commission had jurisdiction over religious higher education entities. Many alumni couldn't understand the college's explanation for pursuing its lawsuit, and to them it looked like the college was fighting for the right to racially discriminate.

"I've always found it to be ironic and almost shameful that the college refuses to realize how they're in the wrong," said Jenn Wilmot, a 2006 graduate and a co-founder of Chestnut Hill's Alumni of Color Collective, which has supported the student who filed the discrimination complaint.

The universities that have filed lawsuits often deny they are seeking to be exempt from law. Jenkins, in his letter to the Notre Dame community, said the purpose of the lawsuit was to "win the right" to make its own decisions about health care that are consistent with Catholic principles. He declined to comment through a spokesperson.

A spokesperson at Chestnut Hill said, "The College sought only to test only the limited question of whether the jurisdiction of the PHRC applied to Catholic institutions of higher learning, based on precedent that exempts Catholic secondary schools from its provisions. At no time has the College claimed that it is or should be exempt from Pennsylvania's anti-discrimination laws."

When asked whether Catholic universities were providing enough justifications to seek exemptions, Moore of the Association of Catholic Colleges and Universities rebuffed the terminology. "Catholic colleges in no way are looking to be exempt from the law and looking to be exempt from doing what's right," she said. "What they're saying is, 'We want to have a seat at the table, but you as a player recognize us as a Catholic institution. Don't consider us like any other college.' "

Dempsey argues the wording from university leaders' public statements doesn't match the arguments they make in their legal cases.

"If you're saying, 'Well this may not be too bad, and we just want to have the right to decide,' " Dempsey said, "you haven't proven the law is imposing a burden on you."

"The justification is just nonsensical. The terms of labor law just don't have anything to do with a university's Catholic identity that I can understand."

Notre Dame's changing stance on the contraceptive mandate has left the campus divided. Three Notre Dame students were parties in a lawsuit seeking to halt Trump's rollback of the mandate. On the other end, Sycamore Trust released a statement condemning Jenkins' most recent actions. Dempsey said if the university's board and fellows follow Jenkins' choice to provide contraceptives, save for abortion-inducing drugs, it will mean Notre Dame's legal action from five years ago amounts to "a pretend lawsuit," damaging the university's credibility.

Dempsey, who worked as a clerk under former Supreme Court Chief Justice Earl Warren and has practiced law for decades, contends universities acting under obligation of law aren't contradicting their Catholic missions because they don't have a choice. But he still believes they should resist laws pressuring their religious identities — unless the punishment for flouting the law or the legal cost is too severe.

A legal fight that's too expensive could leave an institution unable to perform at its optimum level and, Dempsey said, that "would be destructive of their mission of Catholic education," too.

[Mark Dent is a freelance writer based in Philadelphia. His work has appeared in Slate, VICE, The Dallas Morning News, The Kansas City Star and many other publications.]

This story appeared in the May 4-17, 2018 print issue under the headline: Legal battles proliferate .