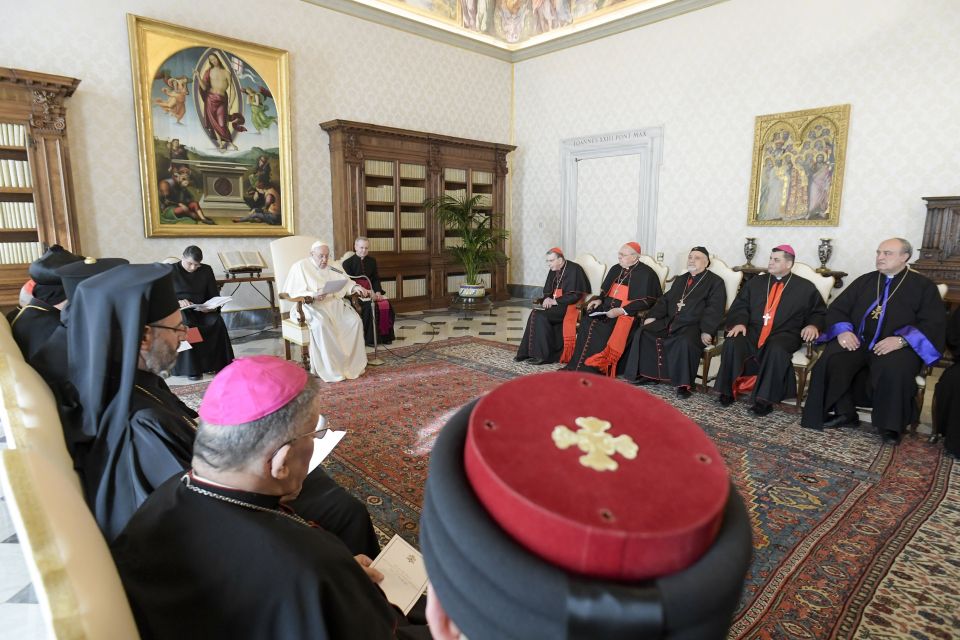 Pope Francis met with an ecumenical group of Christian leaders from Iraq in the library of the Vatican's Apostolic Palace Feb. 28, 2022. (CNS photo/Vatican Media)

VATICAN CITY — Christians have a right to remain in Iraq and the obligation to contribute to the country's growth and recovery, which will require collaboration among the churches and a commitment to interreligious dialogue, Pope Francis said.

A group of Iraqi Christian leaders came to the Vatican Feb. 28 to mark the first anniversary of Pope Francis' visit to their nation.

As he did during that visit March 5-8, 2021, Pope Francis paid tribute to Iraqi Christians martyred in recent times by extremists purporting to act in the name of Islam.

"I bow before the suffering and martyrdom of those who have preserved the faith, even at the cost of their lives," the pope said. "Just as the blood of Christ, shed out of love, brought reconciliation and made the church flourish, may the blood of these many martyrs of our time, belonging to different traditions but united in the same sacrifice, be a seed of unity among Christians and a sign of a new springtime of faith."

Praising the way the Christians of Iraq have worked together to defend the citizenship rights of their people and to provide health care, education and charitable assistance to all, Pope Francis encouraged them to continue seeking Christian unity and engaging in interreligious dialogue.

"To engage in dialogue is the best antidote to extremism, which is a danger for the followers of any religion and a grave threat to peace," he said.

"However," he said, "it takes work to eradicate the root causes of fundamentalism, of these forms of extremism that take root more easily in contexts of material, cultural and educational poverty, and are fed by situations of injustice and vulnerability, such as those left behind by wars."

Pope Francis acknowledged that while Iraq is rebuilding, the temptation of many, especially of the young, is to try to immigrate to a country where prospects seem brighter.

But Christian pastors have a special duty to help their people remain in Iraq, he said. "It is not possible to imagine Iraq without Christians."

"Iraq without Christians would no longer be Iraq because Christians, along with other believers, contribute strongly to the country's specific identity as a place where co-existence, tolerance and mutual acceptance have flourished ever since the first centuries," he said. And despite some horrific phases in its recent history, he said that Iraq "has the vocation of demonstrating, in the Middle East and throughout the world, peaceful coexistence in diversity."

Experts point to US role in migrants' flight