The Democratic Party's instincts for self-destruction continue. The Democratic Congressional Campaign Committee, which tries to get Democrats elected to the House of Representatives, and to which members pay dues, is not endorsing incumbent Rep. Dan Lipinksi of Illinois. The pro-life congressman has been targeted by NARAL Pro-Choice America and other abortion rights' groups for years, but the Democratic Congressional Campaign Committee has always followed its custom of endorsing incumbents. There are some inside the Beltway Dems who are determined to make the Democrats the party of late-term abortions and transgender bathrooms, which is the recipe for another Trump victory. These groups are as rigid in their ideology as is the National Rifle Association and both hollow out the center of American politics, yielding disastrous consequences.

Speaking of the NRA, kudos to my friend Bishop Thomas Tobin of Providence for calling them out for their opposition to common sense safety measures. I disagree with the bishop slightly: I do want to take away their guns if those guns are assault rifles that no one needs unless they are in the military. More on this tomorrow.

At The New York Times, Noam Scheiber and Ken Vogel write about the rich folk trying to destroy unions and who have been pushing the bogus arguments made in the Janus v. AFSCME case at yesterday's oral arguments. I am generally not inclined to the modern view that requires us to reduce all political issues to issues of power, but this case is not about law, it is about power, and only the willfully blind fail to see it.

At Vox, a report on the Trump administration's attempt to gut the Affordable Care Act via regulatory reform and executive orders. When people do not have access to health care, many of them die when they needn't have done so. Is the pro-life caucus up in arms? No. They are still so excited that President Trump spoke at their March via video hookup. Pathetic.

At the always important Wonkblog, Andrew Van Dam looks at the real reasons that the number of Americans working has declined in the last two decades. Surprise: It has nothing to do with immigration, Obamacare or food stamps. The principal culprits were automation and bringing China into the World Trade Organization.

I got an email from the notorious Napa Institute, which is not really a think tank, more of a chance for rich folk to rub elbows with conservative bishops and academics. They encourage people to attend the annual Rector's Dinner at "one of our strategic partners, the Pontifical North American College." This raises a question for Fr. Rector: Why is this nefarious group that is filled with people who directly or indirectly attack the pope a "strategic partner" with your seminary? I understand the need to fundraise, but there comes a point at which the Catholic integrity of our institutions is called in to doubt from such associations. What's next? Making the Acton Institute a "strategic partner"? 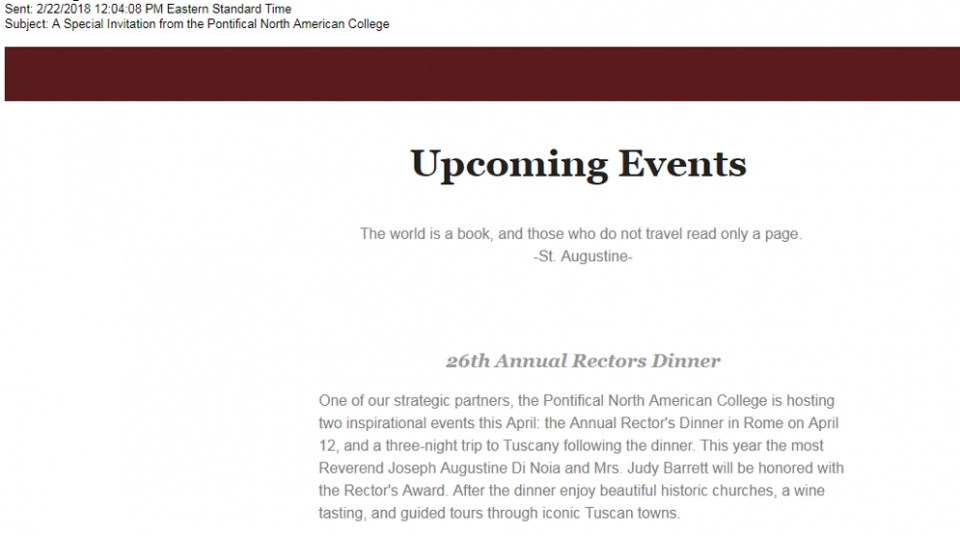 Screenshot from the email referenced above