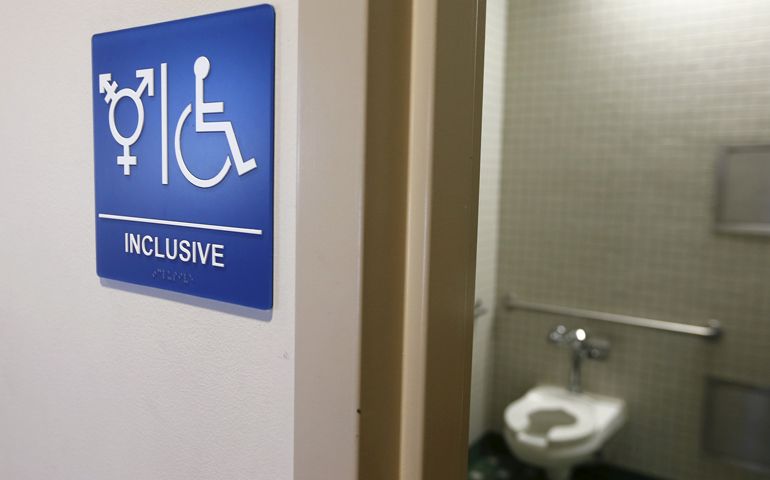 A gender-neutral bathroom is seen in this 2014 file photo, at the University of California, Irvine. (CNS/Lucy Nicholson, Reuters)

America's culture wars may be moving beyond birth control, but they remain at full tilt when it comes to the religious liberties of wedding vendors and use of public bathrooms by transgender people, according to a new poll that also found sympathy for disparate views in short order.

A report from Pew Research Center released Wednesday on religious liberty and nondiscrimination found two-thirds of U.S. adults believe employers should be required to provide access to birth control in employee health plans, regardless of the religious beliefs of the employer, whereas 30 percent affirmed the employer's right to refuse such coverage. The consensus holds along lines of race, age and gender, but weakens to a near-even split among those attending weekly religious services; people going to church less often heavily back providing contraceptives.

But agreement re-emerges on the moral dimension of birth control, as just 4 percent of Americans view its use as morally wrong. More than nine-in-10 Americans said it is either morally acceptable (36 percent) or not a moral issue at all (57 percent).

Since it was introduced in January 2012, the federal government and religious groups have contested in search of a satisfactory compromise to the mandate in the Affordable Care Act requiring employers to provide employees contraceptive access. The two sides have searched for mutual agreement on the mandate since the U.S. Supreme Court in May sent the Zubik v. Burwell case that challenges it back to the appeals courts.

It was another Supreme Court decision a year earlier legalizing same-sex marriage nationwide that elevated concerns about religious objections to providing services to same-sex weddings. The dispute over bathroom access for transgender individuals arose earlier this year, after North Carolina passed a law requiring people to use public restrooms corresponding with their birth gender.

Compared to relative consensus on birth control access, polarization among Americans reigns on the rights of wedding businesses and the right restroom for transgender people.

The nation is evenly split on whether wedding vendors -- florists, photographers, cake-makers, event space owners, etc. --  should be required (49 percent) or allowed to refuse (48 percent) to serve same-sex couples if they hold religious objections to homosexuality. A majority of Catholics overall (54 percent) side with requiring such service, while weekly Massgoers largely land on the side of refusal (51 percent).

How people view homosexuality appears to influence how they perceive the question. Of the 35 percent of Americans saying homosexual behavior is morally wrong, three-in-four say business owners should have a right to refuse if they have religious objections to homosexuality. Conversely, two-in-three Americans among the 62 percent who believe homosexuality as either morally acceptable or not a moral issue say businesses should be required to serve same-sex couples.

The poll also found that 87 percent of Americans know someone who is gay but only three-in-10 know someone who is transgender. That personal relationship with a transgender person appears to correlate with greater support for the use of bathrooms by their currently identifying gender (60 percent vs. 47 percent of those not knowing a transgender person), whereas those who personally know a person who is gay largely mirror Americans overall in their views.

Adding to the polarization around all three issues in the survey is a lack of sympathy among people on all sides for other points of view.

Before asking respondents' opinions on the three issues, Pew first polled their sympathy levels for the arguments expressed on either sides. With all three issues, less than one-in-four U.S. adults expressed understanding with both sides. More often, they pushed their sympathy solely to their side of the issue, though no argument for any issue eclipsed 40 percent among all Americans.

Jewish and religiously unaffiliated individuals were the only demographic groups where a majority sympathized with the arguments for contraceptive access, requiring businesses to serve same-sex couples and bathroom use by current gender identity. Catholics skewed toward those views, as well, though at lesser percentages.

Along political lines, support and sympathy on each issue also aligned within the Democratic and Republican parties.

The survey, conducted online and by mail from Aug. 16-Sept. 12, polled 4,538 U.S. adults, including 817 Catholics, three-fifths of them weekly Mass attendees. Its sampling error was plus or minus 2.4 percentage points.

'There is no war on religion'

Arguments on religious liberty was one focus at the annual Religion News Association conference, held over the weekend in Silver Spring, Md.

Douglas Laycock, a professor of law and religious studies at the University of Virginia Law School, told journalists attending that what has been missed by many in the discussion of wedding vendors is that for those refusing to serve same-sex couples "a marriage is inherently a religious relationship and therefore, a wedding is inherently a religious event," one that violates their understanding of God's law.

Even if the business does not participate in the actual wedding ceremony, but instead the reception, Laycock, an appellate litigator who has played a role in developing state and federal religious liberty legislation, said he believed the religious exemption should still apply, even though the courts so far have not ruled in that way.

"Their job is to make this the best wedding. And the gay couple still gets to live its values by using a different florist, but that florist with conscientious objection doesn't get to live by her values unless she gives up her business," he said.

There are bigots who object to serving the gay community, Laycock added, but those cases are rarely brought to court because they aren't winning cases and less likely religiously motivated.

As for perceptions of hostility of President Barack Obama toward religious communities, the Virginia professor said it just doesn't hold weight. He said the White House has been "quietly heroic" in its ability to assure religious charities can hire adherents of their faith, and that while it underestimated the religious objections to the contraception mandate, the eventual solution it offered is ambitious and sophisticated.

Marie Griffith, director of the John C. Danforth Center on Religion and Politics at Washington University in St. Louis, said cries about religious liberty violations have long been borne from a perception among religious groups that they are victims of injustice and their rights have been denied while others have received more freedom. Such victimization claims, she said, are powerful in a democracy like America that seeks to be free of religious prejudice.

For Catholics in particular, Griffith, a historian of American religions, said their history in America reflects a reality of prejudice and discrimination that has conferred upon them "a victimization story."

"It's a true story, they were victims of this Protestant hatred for decades, but it's one that can be and is played out over and over again, I think, even in the controversies we face today," she said.

Still, not every claim of religious prejudice is justified, she said, and oftentimes acts as a conversation stopper. Laycock added that many of the activists on both sides of religious liberty disputes are less concerned with religious freedom and more with winning the culture war.

The refrain of religious discrimination has been a near-constant among Christians in the past century, Griffith said her research for an upcoming book shows. From opposition to birth control in the 1920s to censorship of books and art deemed obscene, to teaching sex-ed in schools, they often appear in response to disapproval with a change in culture.

She offered the resistance to such present-day shifts, such as the expansion of gay rights and feminist attitudes, as one explanation to some of the antipathy evangelicals hold toward Hillary Clinton, "a pro-choice, pro-gay rights, tough-as-nails, outspoken, non-submissive woman."

"The more that people feel themselves to be persecuted, the more desperately they will search for redress. And perhaps in a would-be leader who promises to make their once great Christian nation great again," Griffith said.

Exploring the T in LGBT