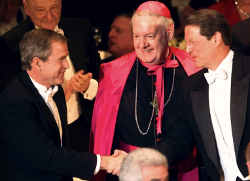 NEW YORK (RNS) -- By tradition, the storied Al Smith Dinner has provided a few hours of comic relief from the angry volleys of the campaign trail -- a white-tie charity banquet held in the weeks before Election Day, hosted by the archbishop of New York and featuring speeches by the two presidential candidates on the condition that they lob nothing more than good-natured jibes.

But the Catholic hierarchy's fierce feud with President Obama, abetted by the increasingly sharp tone of the 2012 elections, is threatening to invade this demilitarized zone and give New York Cardinal Timothy Dolan a case of pre-dinner agita.

Dolan has reportedly extended an offer to Obama (as well as his Republican opponent, Mitt Romney) to attend this year's dinner at the Waldorf-Astoria, scheduled for Oct. 18, and reports say the president has accepted. That has mobilized abortion opponents, who view Obama as the worst thing since Roe v. Wade and an enemy of religious liberty because of his administration's controversial birth control mandate.

The Rev. Frank Pavone, head of Priests for Life, a leading abortion opponent based in Staten Island, said Monday (Aug. 6) that "the polite putting aside of differences for a while amounts to scandal."

"There comes a time when enough is enough and we can no longer afford to give people a reason to doubt our position as a Church," Pavone wrote in an email. "So no, I don't think the invitation is appropriate at this time."

"Better to cancel the event than have it become another cause for scandal in the Catholic Church," Randy Engel, head of the U.S. Coalition for Life, told LifeNews.com, an anti-abortion website.

The New York Archdiocese has not formally announced that Obama and Romney have been invited, or have accepted. But Meghan McGuinness Myers, executive director of the Alfred E. Smith Memorial Foundation, which organizes the annual fundraiser on behalf of various children's charities, told LifeSiteNews that Obama had been invited and had accepted.

Myers did not respond to requests for comment, and Dolan's spokesman, Joseph Zwilling, said in an email that an announcement would be made "when the speaker or speakers have been confirmed and finalized." He did not elaborate.

The White House did not respond to a request for comment on Monday.

Obama's acceptance of the cardinal's invitation was first reported on July 26 by a National Catholic Reporter blogger, Tom Gallagher, who also reported that Romney would attend. (See also: What's in store for the 2012 Alfred E. Smith Memorial Foundation Dinner?)

But conservative anxiety about the possibility that Dolan would invite Obama has been building for months, and the invitation could herald a difficult stretch for Dolan.

The cardinal wears several hats -- he heads the Archdiocese of New York, which launched the charity gala in 1945 in memory of Al Smith, who in 1928 became the first Catholic to head a presidential ticket.

But Dolan is also president of the U.S. Conference of Catholic Bishops and a leader in the hierarchy's ongoing battle with the administration over new regulations that will require all employer health insurance policies to provide free contraception coverage and sterilization along with a range of women's health services.

Dolan has issued sharp denunciations of Obama over the handling of the mandate, and as news of the Al Smith invitation was spreading last week, he wrote a blog post blasting the birth control policy.

The U.S. bishops as a body have become increasingly conservative and increasingly committed to opposing Obama because of his views on abortion and gay rights, as well as the contraception mandate.

There was some criticism in 2008 when Dolan's predecessor in New York, Cardinal Edward Egan, invited Obama to the dinner along with GOP candidate John McCain.

After Obama was elected, however, the hierarchy's unease with the White House grew, especially when the University of Notre Dame awarded the president an honorary degree in 2009. Critics cited the USCCB's own statement that Catholic institutions should not confer "awards, honors or platforms which would suggest support" for those "who act in defiance of our fundamental moral principles."

Critics also point out that in 2004, Egan did not invite either candidate because the Democratic nominee, John Kerry, was a Catholic who supports abortion rights. In 1996, the late Cardinal John O'Connor made the same decision because he did not want to give President Clinton, also an abortion rights supporter, a church-sponsored platform that tends to show the candidates in a flattering light.

On the other hand, associates say the Al Smith Dinner would normally be a showcase for Dolan's personality and approach to ministry. His natural inclination is to maintain an open-door policy and to find common ground with opponents whenever possible. He is reflexively outgoing, and in fact will be appearing next month with Comedy Central funnyman Stephen Colbert on a panel about faith and humor and evangelization.

None of that, however, is likely to cut any ice with abortion opponents.

"Regardless of what they've done in the past, it is unthinkable for a Catholic charity to invite the man" -- President Obama -- "seeking the destruction of religious freedom in America to a fundraising event," Michael Hichborn of the American Life League told LifeSiteNews, another anti-abortion website.

"This sends the wrong message to pew-sitting Catholics, who are anxiously looking to our bishops to stand up and fight against this clear enemy of the Church who will be joining them for dinner."