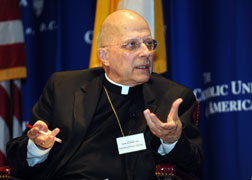 The fallout in the Catholic community from the recent debate over health care reform is sure to reverberate for years to come. Here, NCR Washington correspondent Jerry Filteau looks back at one of the more contentious issues of the debate -- abortion -- and analyzes the position of the U.S. bishops, longtime supporters of universal health care coverage who nonetheless ended up opposing the legislation.

Washington -- "In the Senate bill, there is the provision that only one of the proposed multi-state plans will not cover elective abortions -- all other plans (including other multi-state plans) can do so, and receive federal tax credits. This means that individuals or families in complex medical circumstances will likely be forced to choose and contribute to an insurance plan that funds abortions in order to meet their particular health needs."

Cardinal Francis E. George of Chicago, president of the U.S. Conference of Catholic bishops, made this claim in a major statement March 15 sharply opposing House passage of the Senate version of health care reform. The House passed it six days later, 220-211, and President Obama signed it into law March 23.

How does the USCCB president's statement stand up to reality?

In other words, no state is required to offer only one exchange plan that excludes abortion, as Cardinal George indicated -- nor to include elective abortion coverage in every other plan, as he suggested, or even in any plan.

In fact, most states are likely to offer multiple exchange plans that exclude elective abortion coverage along with one or more plans that include it -- giving citizens a wide choice that reflects their personal opposition to or support of (including likelihood to make use of) abortion.

Most commentators have argued that the separate billing for abortion coverage -- requiring enrollees to write two health insurance checks a month, one for the main insurance and another just for abortion coverage -- is likely to turn most of the enrollees in the exchange plans away from those plans that include elective abortion. That in turn would make it less attractive for insurance companies to set up exchange plans that include elective abortion.

Rep. Bart Stupak, D-Mich., had introduced an amendment in the original House version of the health care reform bill that would explicitly apply the language of the Hyde Amendment to the entire reform package. The Hyde Amendment is an annual attachment since 1976 to the Health and Human Services appropriations bill that forbids any use of HHS funds for abortions, except in cases of rape, incest, or physical danger to the mother's life.

But even the Stupak amendment -- which the USCCB endorsed -- included language that would have permitted enrollees in federally subsidized insurance exchange plans to attach a rider, or supplemental policy, covering elective abortions -- so long as the enrollees seeking that supplemental coverage paid for it entirely from their own pocket.

Timothy S. Jost, a law professor at Washington and Lee University in Lexington, Va., and co-author of Health Law, a standard textbook used nationwide, has written that the original House version and the Senate bill equally exclude actual federal funding of elective abortion.

"Requiring a separate abortion policy [the Stupak amendment in the original House bill] rather than a separate premium [the Senate bill] is an administrative technicality. It merely requires one more piece of paper," he wrote in a March 5 memo summarizing abortion implications of the two bills.

The memorandum by Jost, a Mennonite who is a strong pro-life advocate, prompted a detailed rebuttal from the USCCB that is dated March 6 on the USCCB Web site but was released, according to Catholic News Service, March 12.

Cardinal George is certainly correct on one point: Where the Stupak amendment would have made elective abortion coverage in insurance plans on the exchange an optional rider that any enrollee could reject, the new law allows insurance companies in the exchange to offer such coverage as an integral part of some plans, rather than an optional rider. It is therefore conceivable that some people who oppose abortion will find that among the plans available to them on the exchange in their state, the best plan for their own medical needs is one that only comes with elective abortion coverage included. In that event, they would have to choose between subsidizing other people's abortions with their insurance premiums or purchasing a plan that is less well suited to their medical situation.

"The Senate bill authorizes and appropriates billions of dollars in new funding -- outside the scope of the appropriations bills covered by the Hyde Amendment and similar provisions -- to fund services at (for example) Community Health Centers. … The new funds appropriated by this bill over the next five years for these centers will be available for abortions."

The USCCB's response to Jost released March 12 (emphasis in the original) makes this claim.

On March 15 Cardinal George issued a related public statement that said: "The Senate bill authorizes and appropriates billions of dollars in new funding outside the scope of the appropriations bills covered by the Hyde Amendment and similar provisions. As the bill is written, the new funds it appropriates over the next five years, for Community Health Centers, for example (Sec. 10503) will be available by statute for elective abortions, even though the present regulations do conform to the Hyde amendment. Regulations, however, can be changed at will, unless they are governed by statute."

The notion that the roughly 1,250 federally financed Community Health Centers serving low-income families -- which provide pregnancy, birth and post-natal care to one-eighth of the children born in this country every year -- would be forced to also provide abortion services sounds very scary to pro-life advocates on the surface. The new law appropriates between $7 billion and $11 billion in new outlays to those centers.

But in his March 14 response to the USCCB rebuttal, Jost noted that none of the Community Health Centers has ever provided elective abortion services and, as agencies funded by Health and Human Services, "cannot legally provide abortions" except in the Hyde Amendment cases of incest, rape and life endangerment to the mother.

Since the new funds for such centers in the Senate bill "are not segregated funds, they are explicitly enhanced funding that will flow into a pool of [HHS] funding" already governed by the Hyde Amendment, any use of those new funds for elective abortions would clearly violate already established federal law, Jost said.

The USCCB claim that those funds not only might be used for elective abortions in Community Health Centers but "will be available" for that use rests on a contentious worst-case scenario in which federal courts foreseeably override the clear intent of the law and order those centers to begin using those funds to provide elective abortions -- despite the fact that the centers are prohibited from using federal funds for that purpose because of HHS regulations enforcing the Hyde Amendment.

At most, the possibility of such an adverse court ruling may merit a subjunctive "could" or "might," from the USCCB, not a future indicative verb, "will be." In fact, Jost's analysis that federal funding of elective abortion at Community Health Centers would remain forbidden under the new health reform law preceded Obama's executive order that explicitly banned such use under the new law. The USCCB prediction that some of the billions of dollars of new health care funding under this act "will be available by statute for elective abortions" is at best contentious, at worst part of the demagogic and incendiary anti-health-reform language used by total opponents of health care reform (with whom the bishops, as advocates of health care as a basic human right, do not want to be associated).

In this entire debate, the legal status of the Hyde Amendment itself is a matter of key importance: Introduced in 1976 by the late Henry Hyde, an Illinois Republican, it is not a statutory law but an annual amendment to the appropriations bill for Health and Human Services. In 1976, Hyde included (over objections by the U.S. bishops) an exception allowing federal funding of Medicaid abortions in the case of pregnancies that posed an imminent threat to the life of the mother

In 1977, recognizing political realities that might lead to its defeat, Hyde reluctantly (and again over objections by the U.S. bishops) added exceptions for pregnancies resulting from rape or incest.

What the USCCB has sought in the 2010 health care reform bill was to raise the Hyde Amendment from an annual appropriations mechanism in HHS funding to more permanent statutory law in all U.S. health care involving federal funding. With the Stupak amendment in the original House version of the health care reform bill, the bishops appeared to be on the verge of success. They were only a couple of votes short of achieving the same result in the Senate.

After the Senate rejected the Stupak amendment in its version of the bill -- and after the entire political landscape in the Senate subsequently changed with the election of an anti-health-reform Republican to replace the late health reform advocate Sen. Ted Kennedy (D-Mass.), the USCCB was faced with an unenviable political decision with substantive moral dimensions: Whether to reject the Senate bill outright because it did not elevate the Hyde Amendment to federal statutory status, or to accept it, with the continued need to keep the Hyde Amendment alive year by year in the appropriations process

By declaring an unalterable opposition to the entire health care reform bill because of its failure to legislate the Hyde Amendment as statutory law, not just annual appropriations measures, the bishops took a major political gamble.

The political fallout will continue for many years to come.

We must restore America's moral compass to combat COVID-19

Theological purity tests will ruin presidents and the presidency