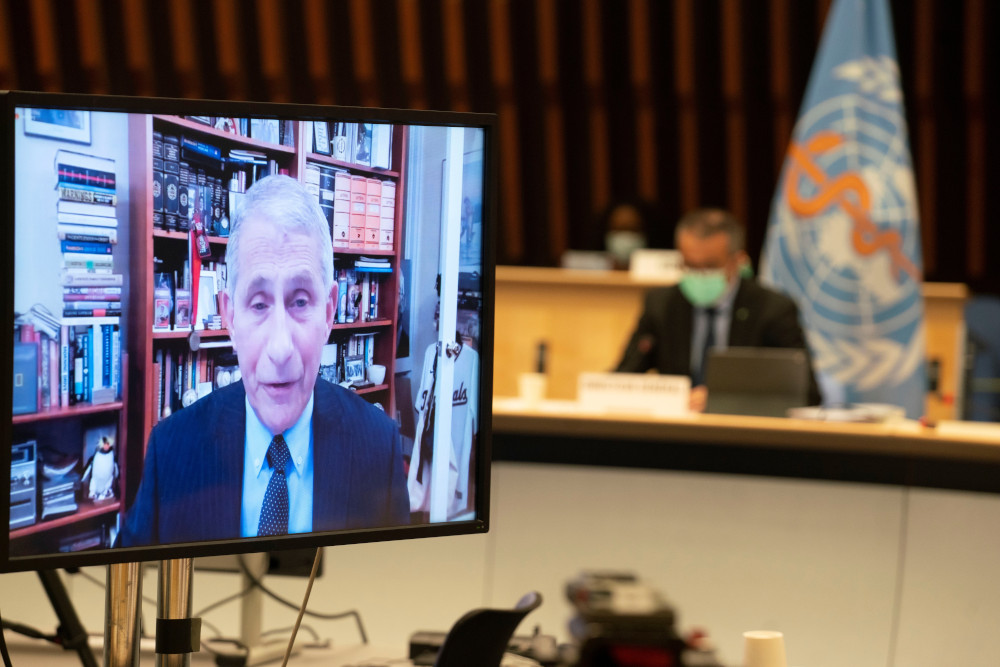 Dr. Anthony Fauci, director of the National Institute of Allergy and Infectious Diseases, speaks Jan. 21, 2021, via video link during a meeting in Geneva of the 148th session of the World Health Organization's executive board on the coronavirus outbreak. (CNS/Handout via Reuters/WHO/Christopher Black)

Dr. Anthony Fauci told the World Health Organization's executive board Jan. 21 that "in the coming days," President Joe Biden will revoke the so-called "Mexico City policy," which blocks U.S. funding of foreign nongovernmental organizations that perform and promote abortion as a form of family planning.

The action will be part of the new president's "broader commitment to protect women's health and advance gender equality at home and around the world," said Fauci, who is the director of the National Institute of Allergy and Infectious Diseases and now Biden's chief medical adviser.

He made the comments after being chosen to head the U.S. delegation to WHO. The White House released his prepared remarks.

First announced by President Ronald Reagan during an international meeting in Mexico City, the policy has been upheld by Republican presidents since then and overturned by Democratic presidents. Critics of the policy call it a "gag order."

By executive order Jan. 23, 2017, President Donald Trump reinstated the policy, which had been suspended by his predecessor, President Barack Obama, and he expanded it to create the Protecting Life in Global Health Assistance Policy.

Last August, then-Secretary of Health and Human Services Alex Azar issued the administration's second report on implementation of the expanded policy. He said it showed the vast majority of foreign nongovernmental organizations — 1,285 out of 1,340 — had complied "with this policy with minimal disruption of health services and no reduction in funding."

In an interview with Catholic News Service shortly after the Nov. 3 election of Biden, Mary FioRito, the Cardinal Francis George fellow at the Ethics and Public Policy Center in Washington, said the Catholic president's actions to overturn Trump's pro-life policies were expected to be swift, starting with the Mexico City policy.

"Biden's position is vastly out of step with the American public, since the majority of Americans, even some who identify as 'pro-choice,' do not want their tax dollars used for programs that endorse abortion as a method of family planning," said FioRito, an attorney, public speaker and commentator on issues involving women's leadership in the church.

The Biden team also has vowed to repeal the long-standing Hyde Amendment, which outlaws federal tax dollars from directly funding abortion except in cases of rape, incest or when the life of the woman would be endangered.