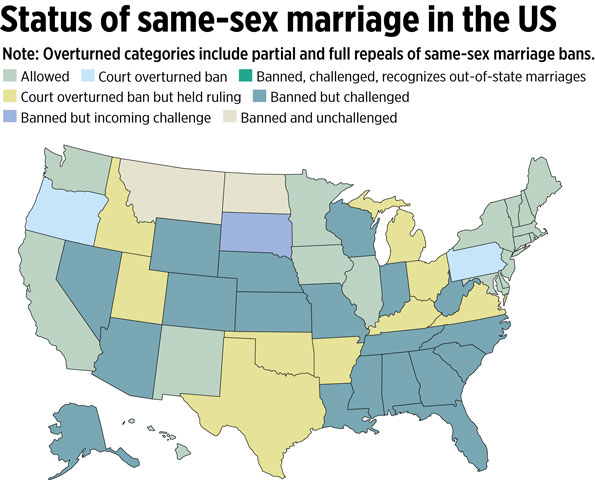 What a difference 10 years makes.

In May 2004, Massachusetts became the first state to allow same-sex marriage. Six months later, with dire warnings about schoolchildren being forced to read Heather Has Two Mommies and threats of legalized polygamy, so-called "values voters" passed bans on same-sex marriage in 11 states and ushered George W. Bush to another four years in the White House.

Fast-forward to 2014, and the cultural and legal landscape could hardly be more different. Today, 19 states and the District of Columbia allow same-sex marriage, and federal courts have struck down bans in 11 more states. The U.S. Supreme Court ordered the federal government to recognize same-sex marriages after ditching a central portion of the 1996 Defense of Marriage Act last year, and 44 percent of Americans now live in states that allow same-sex marriage.

After four same-sex couples filed suit May 21 challenging Montana's ban on same-sex marriage, neighboring North Dakota is the only state that isn't facing a challenge to its gay marriage ban -- at least not yet.

So what changed? The issue is far from settled -- and some conservatives insist that it never will be -- but pro-gay groups clearly have the momentum. Here's why:

The culture changed faster than conservatives thought possible. Led by the popular gay characters on "Will & Grace" and "Glee," gays and lesbians are more visible in public life, and Americans are growing increasingly comfortable with that. A generation ago, coming out as gay was a career-killer; now it's almost trendy.

Within religion, the 2003 election of openly gay Episcopal Bishop Gene Robinson dramatically shifted the conversation about gays in leadership, and Presbyterians and Lutherans voted to allow gay clergy with barely a shrug. The wildly popular Pope Francis changed the tenor of the discussion by famously asking, "Who am I to judge?" as the Catholic church struggles to reclaim its moral credibility on sexual ethics in the wake of the clergy abuse scandal.

Coupled with an aggressive campaign targeted at gays and lesbians to come out to their families and colleagues, America now has innumerable friends, co-workers, celebrities, siblings and children that are the new face of the gay movement. And that, says Evan Wolfson of New York-based Freedom to Marry, carries more weight than any court ruling or legislative vote.

"There's no question that popular culture and celebrities and religious figures who speak out create the air cover for the ground game of personal conversations," said Wolfson, whose group has been at the forefront of the legal fights over marriage. "And that is what really closed the deal."

2. An ally in the White House

It's hard to overestimate the power of a bully pulpit, and there's no bigger microphone than the chief executive's. While Barack Obama may be the country's first black president, he will also be remembered as the most pro-gay occupant of the Oval Office -- even if it took him time to get there.

Obama's White House shaped the cultural narrative around gay rights by ending the 17-year "don't ask, don't tell" ban on gays and lesbians serving in the military. Like Obama, millions of Americans reached the same conclusion: If gay men and women can die for their country, why shouldn't they be allowed to get married? And if it's OK for the military, why not for everyone else?

Perhaps most significantly, Obama's Justice Department dropped its defense of the 1996 Defense of Marriage Act, concluding that the federal ban on same-sex marriages was unconstitutional. Attorney General Eric Holder encouraged state attorneys general to do the same, and when the attorneys general in Pennsylvania and Oregon followed Holder's advice, federal courts swiftly struck down bans in both states.

"No one defended the law in court," fumed Archbishop Salvatore Cordileone of San Francisco, the Catholic bishops' point man on same-sex marriage. "Is this justice, or just a farce?"

Whatever it was, it worked for the gay rights side.

"If we would have known 10 years ago that the rule of law would no longer be in play, maybe we would have had a different strategy," added Family Research Council president Tony Perkins, who accused Obama of "unleashing lawlessness on the country."

3. A problem of overreach

Starting with the Defense of Marriage Act in 1996, conservative activists concluded that the only solution to stopping gay marriage was a nationwide ban. A federal constitutional ban on same-sex marriage has languished in Congress for years -- and now Russell Moore, head of the Southern Baptists' Ethics & Religious Liberty Commission, calls such a strategy "a politically ridiculous thing to talk about right now."

In addition, conservative groups resisted moves to compromise on a half-measure like civil unions; Perkins' organization calls civil unions nothing more than "a slow-motion surrender." And that, said veteran gay marriage proponent Jonathan Rauch, was a critical mistake.

"They set an impossible goal for themselves by saying from day one that the goal of success would be not one gay marriage on not one square inch of American soil, and that was never going to happen," said Rauch, a senior fellow at the Washington-based Brookings Institution.

That, in turn, only strengthened the resolve of gay rights groups, even if it meant passing gay marriage state by state, or mounting legal challenges one ban at a time.

In 2004, popular support for same-sex marriage was stuck in the low 30s. According to a Gallup Poll released last month, that number is now at 55 percent. It's now rare to see a poll that finds only minority support for gay marriage.

In short, Americans have concluded that while marriage may well be a sacred institution, couples tying the knot have to seek a marriage license at the courthouse, not the altar. With the moral influence of organized religion on the wane, more Americans have decided that there's a difference between marriage rights -- and all the legal and financial benefits that go with them -- and matrimonial rites.

"Some of our citizens are made deeply uncomfortable by the notion of same-sex marriage," federal Judge John E. Jones III ruled in striking down Pennsylvania's gay marriage ban. "However, that same-sex marriage causes discomfort in some does not make its prohibition constitutional. Nor can past tradition trump the bedrock constitutional guarantees of due process and equal protection."

Perhaps the biggest obstacle facing proponents of traditional marriage was a negative image that they were never able to overcome. While chafing at comparisons to racism and Jim Crow laws, the matriarch of the traditional marriage movement, Maggie Gallagher, concedes that her side has been labeled as "hateful and bigoted." It's no accident that opponents of Proposition 8 -- the 2008 ballot measure that banned same-sex marriage in California -- adopted the logo of "No H8."

Some conservative activists say they brought it on themselves.

"There was the evangelical belligerence, often, in the last generation that spoke, for instance, about the gay agenda, in which there was this picture, almost as though there is a group of supervillains in a lair, plotting somewhere the downfall of the family," Moore told a gathering of journalists in March.

Conservatives also weathered a host of guilt-by-association charges, which were equally hard to dislodge. In Arizona, a bill that supporters said would protect religious freedom was conveyed as license to turn gays away from public businesses. Evangelical opposition to homosexuality was exported to Africa, which took the form of harsh laws to jail or even sentence to death known homosexuals.

In short, it was no longer popular or politically correct to stand against popular culture and a swiftly changing popular opinion.

"They showed no compassion for gay people, they didn't offer any substitutes like protecting gay families or gay kids," Rauch said. "That lack of compassion came through. It took a little while to register, but the American public does not like lack of compassion."

A version of this story appeared in the June 6-19, 2014 print issue under the headline: Five reasons gay marriage is winning.