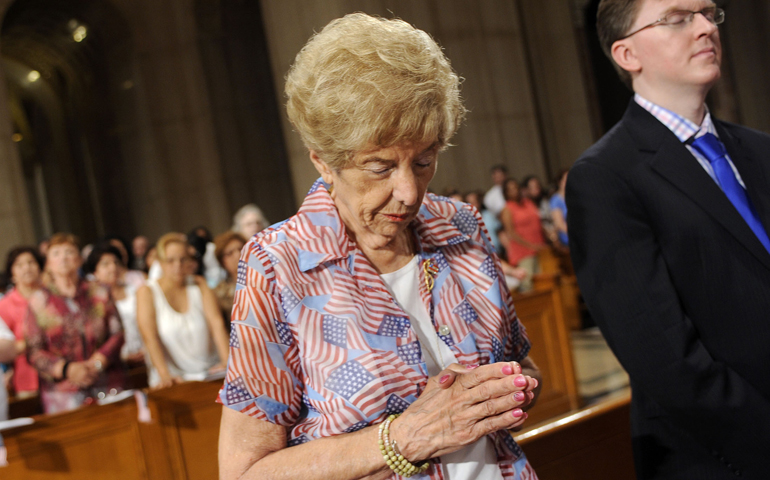 A woman prays during the 2013 Fortnight for Freedom closing Mass at the Basilica of the National Shrine of the Immaculate Conception in Washington. (CNS/Leslie E. Kossoff)

For Archbishop William Lori of Baltimore, the third annual Fortnight for Freedom is an opportunity to consider the link between religious liberty and service to the poor.

"People who value their Catholic faith will understand that there is an organic connection between what we believe and how we practice our faith in service well beyond the borders of the church," Lori said. "We want to be able to practice it unabashedly, whether in church or in the workplace or as part of church ministry. We don't think we should have to compromise our beliefs in order to observe."

As chairman of the U.S. bishops' Ad Hoc Committee for Religious Liberty, Lori has been involved with the fortnight movement from the beginning. Originally stemming out of a 12-page statement released by the committee in June 2012 titled "Our First, Most Cherished Liberty," the fortnight aims to protect religious liberties from government infringement.

For the Catholic church, chief among threats to religious freedom is the U.S. Department of Health and Human Services' mandate that most employers, including Catholic hospitals, schools and charities, provide insurance coverage for contraceptives, sterilization and some abortion-inducing drugs.

Although the event mainly targets Catholics, Lori cites the fortnight as a chance for individuals of all faiths to educate themselves regarding the issue of religious freedom.

"The aim of the Fortnight for Freedom is to build a prayerful awareness not only among Catholics, but among all people of good will, of the importance of religious freedom," he told Catholic News Service. "This year, we are working with ecumenical and other faith groups to lay foundations over time for a larger, unified religious freedom movement."

Archbishop Joseph Kurtz of Louisville, Ky., will be the homilist at the Independence Day Mass. Kurtz is president of the U.S. Conference of Catholic Bishops.

Discussing this year's fortnight theme, "Freedom to Serve," Lori said, "While almost everyone in our culture gives acknowledgement to freedom of worship, it is when churches step beyond their walls and reach out to the poor that religious freedom is sometimes challenged. Individuals have a duty to fulfill their life's mission in accordance with the faith and what we believe."

As the church celebrates a series of great martyrs who remained faithful in the face of political persecution throughout the two-week event, the archbishop hopes that campaigns like this will provide hope to religiously persecuted individuals everywhere.

"This is a time for individuals to come to understand better what religious freedom is, what the church teaches about it and how that affects the way we exercise good citizenship and an appropriate love for our homeland," Lori said. "We believe that the flame of freedom ought to be kept burning brightly within this country as a beacon of hope for religiously persecuted people around the world."