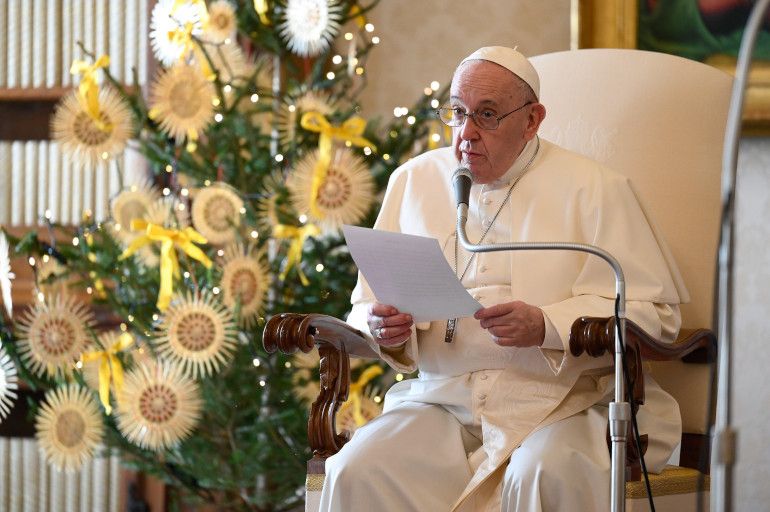 Pope Francis leads his general audience in the library of the Apostolic Palace at the Vatican Dec. 16. (CNS/Vatican Media)

Rome — Pope Francis urges global governments in his message for 2021's World Day of Peace to shift spending away from military needs in order to help those experiencing poverty and to provide better healthcare to their populations.

In the message, released Dec. 17, the pontiff laments the continuing number of violent conflicts around the world, saying that many places "can no longer remember a time when they dwelt in security and peace."

The pope reiterates a suggestion from his latest encyclical letter, Fratelli Tutti, that world leaders create a new "global fund," where they could deposit money that used to be spent on military resources for distribution toward peaceful purposes.

"We need to stop and ask ourselves what has led our world to see conflict as something normal, and how our hearts can be converted and our ways of thinking changed, in order to work for true peace in solidarity and fraternity," writes the pope.

"How many resources are spent on weaponry, especially nuclear weapons, that could be used for more significant priorities such as ensuring the safety of individuals, the promotion of peace and integral human development, the fight against poverty, and the provision of health care," Francis asks.

Francis' message for the World Day of Peace is the 54th prepared by a Catholic pope. It carries the theme: "A Culture of Care as a Path to Peace." The text will be officially sent out Jan. 1, the Catholic feast day for the Solemnity of Mary, Mother of God.

Pope Paul VI first dedicated the feast to world peace in 1967, and each feast since 1968 has seen release of a papal message.

The 2021 message unfolds over five pages and nine brief points, in which the pope also proposes that global leaders could use Catholic teachings on the common good, solidarity and care for creation as a "compass" in helping address long-standing social inequalities.

Using Catholic teachings in such a way, Francis says, "will enable us to esteem the value and dignity of every person, to act together in solidarity for the common good, and to bring relief to those suffering from poverty, disease, slavery, armed conflicts, and discrimination."

"I ask everyone to take this compass in hand and to become a prophetic witness of the culture of care, working to overcome the many existing social inequalities," the pope writes.

Francis has proposed creation of a new "global fund" for the deposit of money spent on military needs at several points throughout 2020. He referred to the matter in his encyclical, released Oct. 4, as well as during an Oct. 16 message to the U.N.'s Food and Agriculture Organization for World Food Day.

The pope mentions the ongoing pandemic at the beginning of his new message, saying he is thinking of those who have lost loved ones and of the health care workers who "have made, and are continuing to make, great sacrifices to be present to the sick, to alleviate their sufferings and to save their lives."

We keep spending our treasure on war