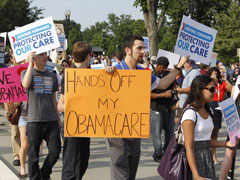 The U.S. Supreme Court's decision to uphold the constitutionality of the Patient Protection and Affordable Care Act, President Barack Obama's landmark legislation on health care reform, vaulted the controversial law back into the national spotlight. But with a still anemic economic picture dominating most voters' concerns, will the Affordable Care Act still be an issue in November?

Conservative Catholics seem especially motivated by the issue of religious liberty, and their principal focus has been on the provision of the law that allows the Department of Health and Human Services to mandate insurance coverage for certain procedures, like contraception, to which the church objects. Liberal Catholics, as evidenced by the attention generated by the "Nuns on the Bus" tour, are especially concerned about defending social justice programs, with the Affordable Care Act representing the fulfillment of a generations-long struggle to enact universal health care. And what about those Catholic swing voters who hold the balance of voting power in such key battleground states as Florida, Pennsylvania, Ohio and Virginia?

The court ruling was itself a source of some confusion. It was not, in fact, a 5-4 decision, but a 4-1-4 decision in which Chief Justice John Roberts issued the "controlling opinion" because he reached the same result as the court's four liberal justices. But his reasoning was different from theirs and also different from the reasoning put forward by the court's four conservative justices in their dissent. Interestingly, Roberts was the only justice who said the individual mandate, requiring all those who decline to purchase insurance to pay a penalty, was a tax. The four liberals said it was a justified penalty under the Commerce Clause and the conservatives argued that it was an unjustified penalty that violated the Commerce Clause. Only Roberts said the penalty passed constitutional muster under Congress' taxing authority.

Most analysts agree that the Supreme Court decision was key to Obama's re-election prospects. "Take a moment and imagine what it would be like for Obama had it gone the other way," said Mark Silk, director of the Greenberg Center for the Study of Religion in Public Life at Trinity College in Hartford, Conn. "Dead man walking. Romney saying this was all about the constitutionality of [the Affordable Care Act]. Et cetera. The decision doesn't win it for Obama, but makes it possible for him to win."

The warnings of Rick Santorum during the GOP primaries that Mitt Romney would prove an uncertain trumpet in the fight against the health care law were confirmed as Romney's campaign spent several days fighting with itself over whether the individual mandate the court upheld is, or is not, a tax. Each time the Romney campaign flip-flopped on whether or not the mandate was a tax, the country was reminded of Romney's larger flip-flop on the issue of health insurance: As governor of Massachusetts, he had passed a health care overhaul, with an individual mandate, very similar to the law Obama signed.

The word "tax," however, tends to act as a kind of magic spell among Republican ad makers. Already, a super PAC supporting Romney, Americans for Prosperity, is running an ad that claims the Affordable Care Act is one of the "largest tax increases in history." This has become a frequent Republican talking point, echoed by conservative radio host Rush Limbaugh, among others. The nonpartisan group PolitiFact gave the claim its highest rating of deceit: "Pants on Fire."

The Romney campaign used the renewed focus on the law to accuse Obama of breaking a campaign promise. The Romney campaign sent out a note on Twitter and Facebook that read: "Promise: President Obama promised to lower annual health insurance premiums by $2,500. ... Result: Annual health insurance premiums have increased by $2,393. ... Gap: Health premium costs are $4,893 higher per family than President Obama promised." This claim is an example of what a politician once called "fuzzy math." First, Obama promised that, once fully implemented, health care reform would lower premiums from their anticipated rate of growth, not lower them in actual dollars: With or without the Affordable Care Act, health care costs will rise. Second, the Romney campaign cited the Kaiser Family Foundation numbers to determine the actual increase in premiums, but the campaign started with the year 2008, when George W. Bush was still president. And, of course, much of the law will not take effect until 2014. The Washington Post's fact checker, Glenn Kessler, gave the Romney claim his highest rating for deceit, four Pinocchios.

The renewed focus on the Affordable Care Act has had one benefit for Obama and the Democrats. In 2010, many Democrats refused to run on their support for law, and they got shellacked as voters only knew what the GOP said about it. Several provisions of the law are wildly popular, as it turns out, such as allowing young people to stay on their parents' insurance plans until age 26, and forbidding insurance companies from denying coverage to people with pre-existing conditions. Once voters realize that there is no huge "tax" that they will have to pay to make the Affordable Care Act work, Republicans' less-than-honest claims about the law might further damage their reputation with moderate swing voters who tend to be pragmatic and non-ideological.

In the 1990s, Ryan White became the face of the effort to increase funding to combat HIV/AIDS and opponents looked downright mean-spirited. One wonders why the White House hasn't found a Ryan White for health care.

On their hugely successful "Nuns on the Bus" tour, the women religious who work at the Catholic lobbying organization NETWORK encountered many people with heart-wrenching tales about their inability to gain access to health care. Social Service Sr. Simone Campbell, NETWORK's executive director, told NCR about one woman, Margaret, who had lost her job at age 51 and could not afford to pay her insurance premiums. "She knew that there was something wrong with her, but she had no money for medical care," Campbell recalled. "She ended up dying at the age of 56 from colon cancer. Her family came directly from her memorial service to our 'friend raiser' in Cincinnati. They brought me a picture of her that I have in my Bible. They wanted to lift her up so that no more Margarets need to die unnecessarily. When the Affordable Care Act is fully implemented in January 2014 (and if the states opt in for the expansion through Medicaid) those like Margaret will have health care coverage. This is a pro-life program and must be affirmed as the way forward."

The political fallout over the new health law may be felt as much in congressional races as at the presidential level. Several Democratic members of Congress have lost seats in key swing districts, largely on the strength of opposition to the health law. In upstate New York in 2010, former Democratic Congressman Dan Maffei lost narrowly to Republican Ann Marie Buerkle, a tea party favorite who has one of the most conservative voting records in Congress. Maffei, who is in a rematch this year with Buerkle, is hoping the court's ruling will help get voters to move on. "I don't think people want to repeat past battles over and over again. The health care bill is the law of the land, the court ruled it constitutional, so let's improve it," Maffei recently told Politico. "You don't like what's in it? Give me a suggestion, I'm open minded, but let's move forward -- let's get past these partisan debates. Let's focus on jobs and the economy."

In most recent elections, about 45 percent of Catholics consistently vote Democratic and 45 percent vote Republican. Whether the Supreme Court's decision will sway the 10 percent who are up for grabs is anybody's guess.

The response to the Supreme Court's ruling from the U.S. bishops' conference will do little to help swing-voting Catholics decide. The bishops restated their unwillingness to call for the repeal of the law, as well as their decades-long commitment to universal health insurance. But they also reiterated three problem areas that they believe need to be addressed: the possibility that the law might allow for federal funding of elective abortions, the lack of robust conscience protections, and the fact that the law does not extend health insurance to undocumented immigrants. The first concern was addressed by courts in Ohio and Virginia last year that ruled the Affordable Care Act does not, on its face, allow for federal funding of abortion. The second concern is at the heart of the debate over the HHS contraception mandate. And the third concern is politically impossible in the current Congress. In short, the bishops' response to the court ruling aligns them with the Democrats in some regards and the Republicans in others.

Few Catholics, however, read statements at the bishops' conference website. Local bishops are more likely to gain a hearing from the people in the pews. But if the relatively scant media attention garnered by the bishops' "Fortnight for Freedom" campaign against the HHS mandate proves anything, it is that the U.S. bishops have a long way to go before they can think of galvanizing the Catholic vote. Indeed, the "Nuns on the Bus" got much more media attention.

[Michael Sean Winters writes about religion and politics on his Distinctly Catholic blog on the NCR website, at NCRonline.org/blogs/distinctly-catholic, first place finisher for Best Individual Blog in the 2012 Catholic Press Association competition.]

Trump at 100 days: It's time for progressives to go on the offensive