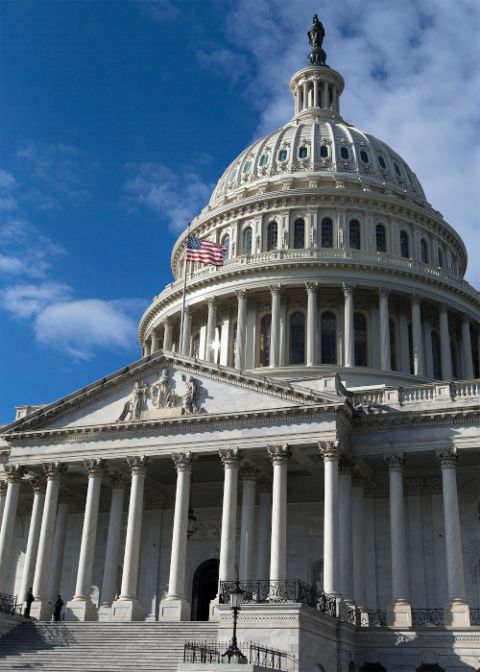 The U.S. Capitol is seen in Washington Jan. 6, 2020. In a 224-189 vote July 24, the U.S. House passed an appropriations bill that ends a policy banning all foreign nongovernmental organizations receiving U.S. funds from performing or promoting abortion as a method of family planning in other countries. (CNS/Tyler Orsburn

Washington — The head of National Right to Life told House members ahead of a July 24 vote on an appropriations bill that U.S. taxpayers' money "should not become a weapon in the arsenal of pro-abortion groups as they seek to destroy the sovereignty of nations opposed to abortion on demand."

Carol Tobias, the pro-life organization's president, made the comments in a letter to House members urging them to vote against H.R. 7608, the appropriations bill funding eight federal departments and agencies including the State Department and its Foreign Operations program.

The Protecting Life in Global Health Assistance Policy included and expanded the so-called "Mexico City Policy," which bans all foreign nongovernmental organizations that receive U.S. funds from performing or promoting abortion as a method of family planning in other countries.

By executive order Jan. 23, 2017, President Donald Trump reinstated and expanded the policy, which had been suspended by President Barack Obama.

Under this expanded policy, "global health assistance" includes funding for international health programs, such as those for HIV/AIDS, maternal and child health, malaria, global health security, and family planning and reproductive health. Opponents of the policy call it a "gag rule" on "pro-choice" groups.

Kemp-Kasten, first enacted by Congress in 1985 and included in appropriations language annually, states that no U.S. funds may be made available to "any organization or program which, as determined by the president of the United States, supports or participates in the management of a program of coercive abortion or involuntary sterilization."

The Kemp-Kasten Amendment, first enacted by Congress in 1985, has been used to withhold funding from U.N. Population Fund, in 19 of the past 36 fiscal years, as determined by presidents along party lines. On June 16 of this year, the Trump administration invoked the Kemp-Kasten amendment to withhold 2020 fiscal year funding for the U.N. agency.

According to National Right to Life, "the most important characteristic" of the Protecting Life in Global Health Assistance Policy is that it establishes an eligibility criterion for U.S. funding.

"If a group is unwilling to agree to avoid promotion of abortion, that group will not receive any type of U.S. support," it said, and those funds then "are channeled to other organizations that agree to the terms of the contract."

"Abortion groups and their allies are willing to trample the laws of sovereign nations and place women and their children in harm’s way — all in an effort to create a global 'right' to abortion,” said Tobias in her letter to House members.

On the House floor July 23 during debate on H.R. 7608, Smith argued for keeping the Protecting Life in Global Health Assistance Policy in place, saying it "mitigates U.S. taxpayer complicity in global abortion."

"U.S. foreign policy — and the foreign entities we fund with billions of dollars in grant money — should consistently affirm, care for, and tangibly assist women and children — including unborn baby girls and boys," he said.

House members, he argued, should be "prioritizing programs that ensure adequate nutrition and supplementation for moms and children during the all-important first 1,000 days of life — from conception to the second birthday — are among the most transformative, life-enhancing commitments that can be made."

"Expanding all these initiatives make women and children healthier, stronger, and more resilient to disease and disability while reducing death and injury," he said.

"Someday," Smith continued, "future generations of Americans will look back on us and wonder how and why a society that prided itself on its commitment to human rights precluded virtually all protection to the weakest and most vulnerable — unborn children."