March for Marriage gathers in the shadow of court rulings 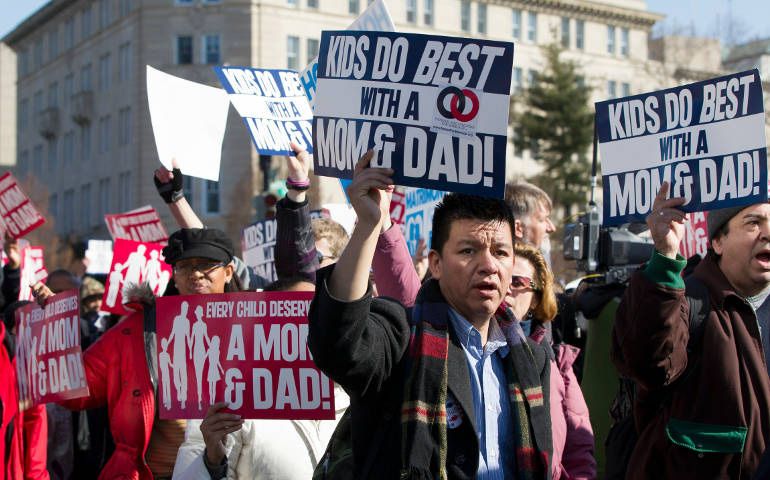 People take part in the 2013 March for Marriage outside the Supreme Court in Washington. (CNS/Nancy Phelan Wiechec)

Despite pleas he forgo the trip, San Francisco Archbishop Salvatore Cordileone will walk the streets of the nation's capital Thursday among thousands in a now-annual national demonstration in favor of marriage between one man and one woman.

Set to begin just before noon with a rally near the U.S. Capitol, the second March for Marriage will lead supporters of traditional marriage along a half-mile route that concludes at the Supreme Court building -- the site where a year ago, two seminal decisions lit the fuse that has sparked federal judges in eight states to overturn existing same-sex marriage bans and another four to issue rulings in favor of same-sex marriage.

Should all the federal judges' rulings be upheld -- most are currently stayed while higher courts review the cases -- 31 states would permit same-sex marriage or recognize unions from other states.

In promotional materials ahead of this year's march, its main sponsor, the National Organization for Marriage, pointed to the Supreme Court decisions, which let stand a federal court's reversal of California's Proposition 8 and found the marriage definition in the federal Defense of Marriage Act unconstitutional, and the corresponding lower court rulings.

"Our votes have been stolen by unelected judges. Our values disrespected and disregarded," stated a narrator in one video.

In its opening, the video says that throughout their history, Americans have refused to be silenced "when a great truth is threatened, when our rights are being assaulted."

"Regardless of creed or color," says the narrator, as footage of Martin Luther King Jr. and the civil rights movement scrolls, "we march to defend our right as a free people to determine our course for ourselves. We speak truth to power."

In addition to the march (and a corresponding virtual march online) and preceding rally, organizers have scheduled a lobby day for the afternoon and a $300-a-plate gala at the renowned Willard InterContinental Hotel for the evening. Friday will follow with an all-day, closed-door global strategy forum for the march's sponsors.

Other sponsors for the march include the Family Research Council, the Heritage Foundation, World Congress of Families, the Christian Union, and Coalition of African-American Pastors. From Catholic circles, hosts include the Philadelphia archdiocese, the D.C. Catholic Conference, and Marriage Unique for a Reason, the U.S. bishops' conference marriage initiative. In addition to Philadelphia, the Pittsburgh, Bridgeport, Conn., and Brooklyn dioceses are sending buses to the march, and a Mass at St. Joseph Church in Washington will precede the day's events.

Speakers include NOM president Brian Brown, Mike Huckabee and Rick Santorum, two past Republican presidential hopefuls, as well as Cordileone, chair of the U.S. bishops' Subcommittee for the Promotion and Defense of Marriage, who also spoke at last year's rally.

About a week before the march, a letter from a group of 61 signers, including Bay Area politicians and heads of national gay ministry and outreach organizations, asked the archbishop to refrain from attending this year.

"We respect freedom of religion and understand that you oppose civil marriage for same-sex couples. But the actions and rhetoric of NOM, and those of the event's speakers and co-sponsors, fundamentally contradict Christian belief in the fundamental human dignity of all people," the letter states.

Responding Monday to the group letter with a letter of his own, Cordileone said the church's teaching "requires me, as bishop, to proclaim the truth -- the whole truth -- about the human person and God's will for our flourishing ... even when truths that it my duty to uphold and teach are unpopular."

He refuted descriptions of the march as " 'anti-LGBT' ... anti-anyone or anti-anything. Rather, it is a pro-marriage march." The archbishop also defended his fellow sponsors and speakers, criticized rhetoric and at times violence against traditional marriage supporters, and asked that "before you judge us, get to know us."

It is that message Steven Bozza, director of the Office for Life and Family for the Philadelphia archdiocese, hopes Thursday's events will convey.

"What I hope comes from this march ... is that the world will see that the people there are not a group of haters," he told NCR Tuesday.

But it's that label that has become part of the reputation of one march sponsor, the Family Research Council. In 2010, the Southern Poverty Law Center listed the council as a hate group for "anti-LGBT" ideology. In addition, the group letter noted the council recently connected the recent outbreak of deadly shootings to the "crumbling of the moral foundation of the country," specifically referencing "the attack on natural marriage."

Marianne Duddy-Burke, executive director of Catholic gay rights group Dignity USA and a signer of the group letter, told NCR she defends Cordileone's right to express his views, which differ from her own on marriage, "but my issue here is not with the content of the message but with the company that he'd be keeping."

"There have been some enormously damaging words that have come out of these groups, and I think they're the wrong groups for our church leaders to be associated with," she said.

The march not only walks the bishops along the fine line of affiliations, but strolls them into their annual Fortnight for Freedom, set to begin Saturday. This year's fortnight aims to highlight the church's service to the poor as basis of the need for religious liberty.

Together, the march and fortnight represent two signature issues the bishops underscored during their annual spring meeting last week in New Orleans. There, Cordileone told his brother bishops: "We are at a critical point in this country when it comes to the promotion and defense of marriage in the law."

He said his subcommittee has endorsed a marriage protection amendment to the U.S. Constitution that would put in law marriage as between one man and one woman, calling it "the only remedy in law against judicial activism." Introduced last June by Republican Rep. Tim Huelskamp of Kansas, the bill has yet to advance past the subcommittee stage. Previous efforts at a marriage amendment came in 2003 in both congressional chambers but died in committees.

The latest amendment comes not only in the climate of federal rulings for same-sex marriage, but also at a time when the latest polls show 55 percent of Americans supporting such unions, a high-water mark. A constitutional amendment requires the approval of three-fourths of the states for ratification.

How much support such an amendment has outside Cordileone's subcommittee, which endorsed it in February, remains unclear. The D.C. Catholic Conference, the Washington archdiocese's lobby arm, told NCR it has its attention focused on the Marriage and Religious Freedom Act but did not mention the marriage amendment.

Likewise, Bozza of the Philadelphia archdiocese said he has not received information from Archbishop Charles Chaput about it. He acknowledged the recent judicial decisions have presented traditional marriage supporters with an uphill battle.

"But, you know, it doesn't mean that that mountain is not climbable, because it is. If it was a lost cause, then we wouldn't be spending all this time and energy organizing this march," he said.

Politics | March for Marriage gathers in the shadow of court rulings