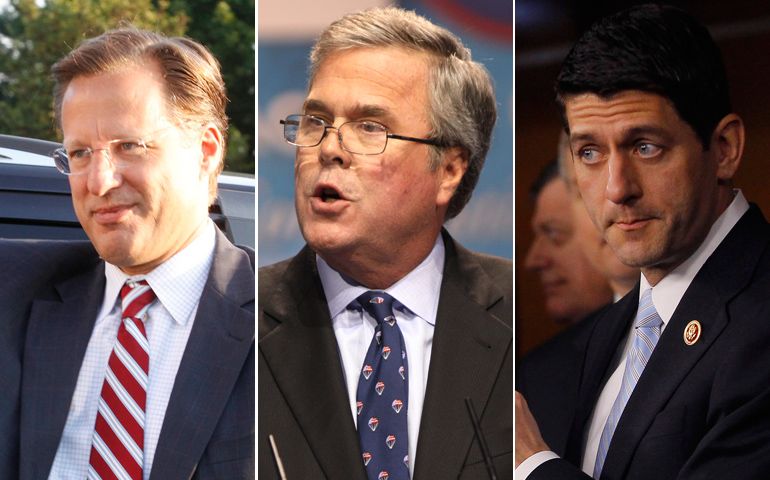 How many voters know that former Florida Gov. Jeb Bush is a Roman Catholic? Or that Texas Sen. Ted Cruz is a Southern Baptist, not a Latino Catholic? Or that Florida Sen. Marco Rubio worships at both a Catholic parish and an evangelical church?

More importantly, does it matter?

It does in today's Republican Party, where a number of factors have forged a new religious identity that supersedes familiar old categories.

These prominent Republicans are emblematic of the new religious amalgam that, in many instances, has helped refashion denominational differences that were once almost insurmountable. Look no further than the stunning Virginia primary victory of Dave Brat, a Catholic with degrees from a Reformed Protestant college in Michigan and Princeton Theological Seminary, who took down House Majority Leader Eric Cantor June 10.

Running in a conservative district in the Richmond suburbs, Brat is described as both a Catholic and Calvinist, labels that would be considered incompatible in almost any realm. He's a champion of a resurgent movement among Catholic intellectuals that seeks to marry Catholic social teaching with economic libertarianism.

Heading into the 2014 midterm elections, several of the Republican Party's emerging leaders are Catholic, including some who maintain evangelical backgrounds or tendencies.

The challenge for Catholic politicians might be finding the balancing act between a Catholic and an evangelical appeal, said Amy E. Black, a political science professor at Wheaton College in Illinois.

"While the Catholic faith used to be a liability, it might even be an asset now," Black said. "Evangelicals are a solid voting bloc in the Republican Party, whereas Catholics are likely to be swing voters. Republican presidential candidates know they need to appeal to evangelical voters, and they want to win over as many Catholic voters as they can."

Evangelicals have been relatively predictable in the past few elections, while Catholics have been less so. Although Catholic voters have historically tended to be Democratic, recent elections have shown them to be the ultimate swing vote. They backed Al Gore in 2000 (50 percent), George W. Bush in 2004 (52 percent), Barack Obama in 2008 (54 percent) and again in 2012 (50 percent), according to the Pew Research Center.

More than 50 years after John F. Kennedy's Catholicism stirred fears that he would be more loyal to the pope than to the people, Catholicism isn't nearly the political liability it once was.

"Growing up, the fact that someone was Catholic would give someone pause," said GOP strategist Ralph Reed, whose "Road to Majority" conference, held June 19-21, featured a keynote address from New Jersey Gov. Chris Christie, a Catholic. "Now, there are a lot of evangelicals who greatly admired Pope John Paul II and some would look to Pope Francis for leadership."

What changed? For one, leading Catholics and evangelicals decided they could do more together than working against each other. Twenty years ago, former Nixon aide Charles Colson and Fr. Richard John Neuhaus, founder of the ecumenical magazine First Things, spearheaded the document "Evangelicals and Catholics Together: The Christian Mission in the Third Millennium," and the cross-pollination the document promoted is having practical effects.

"The alliance forged in the trenches between evangelical Protestants and faithful Catholics in the struggle to defend human life and marriage has blossomed into much greater than a mere marriage of convenience," said Princeton University's Robert P. George, the de facto leader of the Catholic intellectual political movement. "What has emerged is a spiritual fellowship that I think was not anticipated at the beginning by anybody."

The challenge, George said, is for Catholic Republicans to speak in authentic ways to a largely evangelical base. Former Pennsylvania Sen. Rick Santorum, a Catholic, has figured it out, while others, like 2012 vice presidential nominee Paul Ryan, struggled. "I'm so goofy with that stuff," Ryan told Buzzfeed after a service where he sang with extended hands. "It's just not my thing. I'm Catholic!"

"Ryan's Catholicism runs pretty deep," said Stephen Schneck, a longtime Democratic activist and professor at The Catholic University of America. "I'm not sure how he squares it with his libertarianism, but I don't think he really has the same evangelical style as others."

Like Brat's surprise win June 3 in Virginia, Ryan's rise within the GOP reflects the rise of the tea party and a redirected focus among some conservatives from social issues to economics. As the The Washington Post reported, Brat, an economist at Randolph-Macon College in Ashland, Va., is part of a bigger movement in recent years of overtly religious economists.

The central challenge for Catholic Republicans, said Wheaton College's Black, is twofold: not alienating fellow Catholics who say Brat-style economics is anathema to Catholic social teaching, and appealing to the evangelical base in a way that's authentic.

Did Obama finally thread the needle on gay rights and religious freedom?