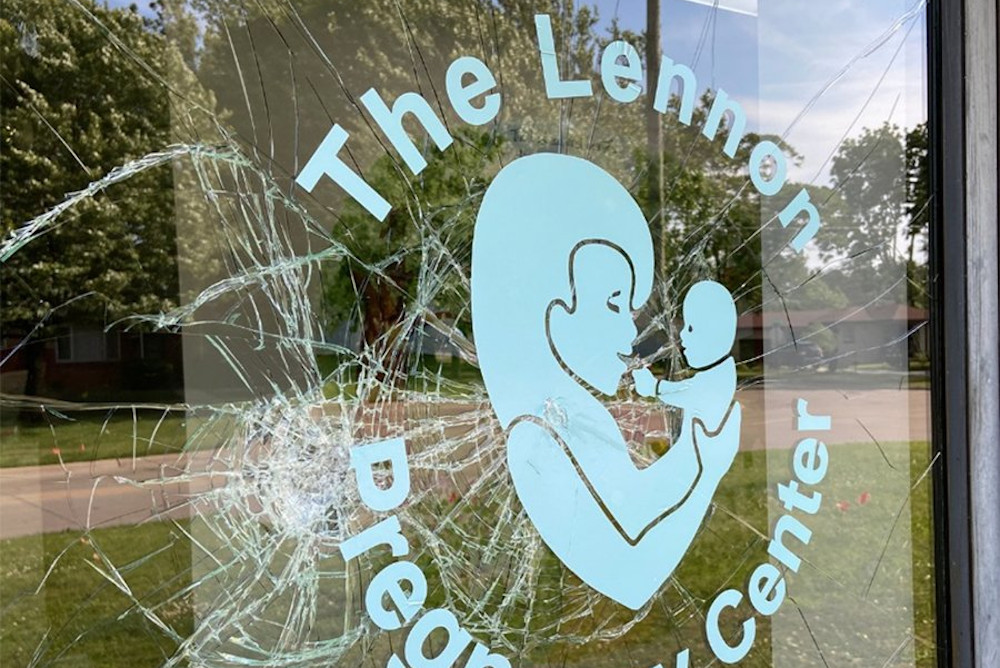 A Dearborn Heights pregnancy center was vandalized June 20 in an apparent attack by protesters who support legal abortion.

Police responded to reports that the Lennon Pregnancy Center, an independent pro-life pregnancy resource facility, was defaced in the early morning hours.

According to a Facebook post from the center, multiple windows and doors along the front of the building were smashed, and the building was spray-painted with graffiti. The police have since painted over the graffiti, and the smashed windows have been boarded up.

Since the May 2 leak of a draft opinion was released indicating the U.S. Supreme Court may be poised to overturn Roe v. Wade in the coming days, pro-life resource centers and churches have been the target of increased vandalism and threats. The Court overturned the ruling June 24.

In its post, the Lennon Pregnancy Center said a printing business that shares the building also was vandalized.

"We are saddened and discouraged by this act of violence, but we will continue to provide free assistance to the women and men that come to us in need of basic help for their children," the post read.

"We will continue to offer free parenting classes, free pregnancy testing and free ultrasounds," it said. "We will continue to help our community that comes to us in need of diapers, clothing, and baby items such as car seats, pack-n-plays, strollers, bottles, blankets, pacifiers and in the middle of a formula shortage, free formula."

According to Gary Hillebrand, the center's president, damage to the facility will cost between $10,000 and $15,000 to repair, and the center has ordered additional security cameras to help protect staff and clients.

The Lennon Pregnancy Center said it had provided aid to 97 individuals in the last month, which included 232 boxes of material goods, and 280 packages of diapers, among other services.

Pro-life and faith leaders have called upon the U.S. Department of Justice to investigate the increased attacks, which have included places of worship. According to the U.S. Conference of Catholic Bishops, from May 2020 to October 2021, there were at least 100 incidents of arson, vandalism and other destruction at Catholic sites across the United States.

News reports say that in many of these attacks, vandals have left the message: "If abortion isn't safe, neither are you." A Catholic News Agency story said that according to Hillebrand, a similar message was spray-painted at the Dearborn Heights center.

On June 12, three protesters disrupted Mass at St. Veronica Parish in Eastpointe, Michigan. One of the protesters, who was nearly naked, stood on a pew and chanted "pro-abortion" slogans before being escorted out by ushers.

The Detroit Archdiocese said that for several weeks it has been alerting pastors and parishes to be aware of security transgressions that have been taking place across the country.

"We are sad to see protesters disrupt a liturgical celebration and disrespect those who were gathered in prayer," said archdiocesan spokesman Ned McGrath. "All religious communities should be free to worship without fear."

On June 23, the second day of the U.S. bishops' conference's Religious Freedom Week, the theme was "Church Vandalism," and U.S. Catholics were urged to pray "that Christian witness in the face of attacks on our churches will convert hearts to faith in Jesus Christ."

McGrath added: "In the Archdiocese of Detroit, we are committed to accompanying women and families facing difficult or unexpected pregnancies and advocating for laws that protect the lives of unborn babies and mothers."