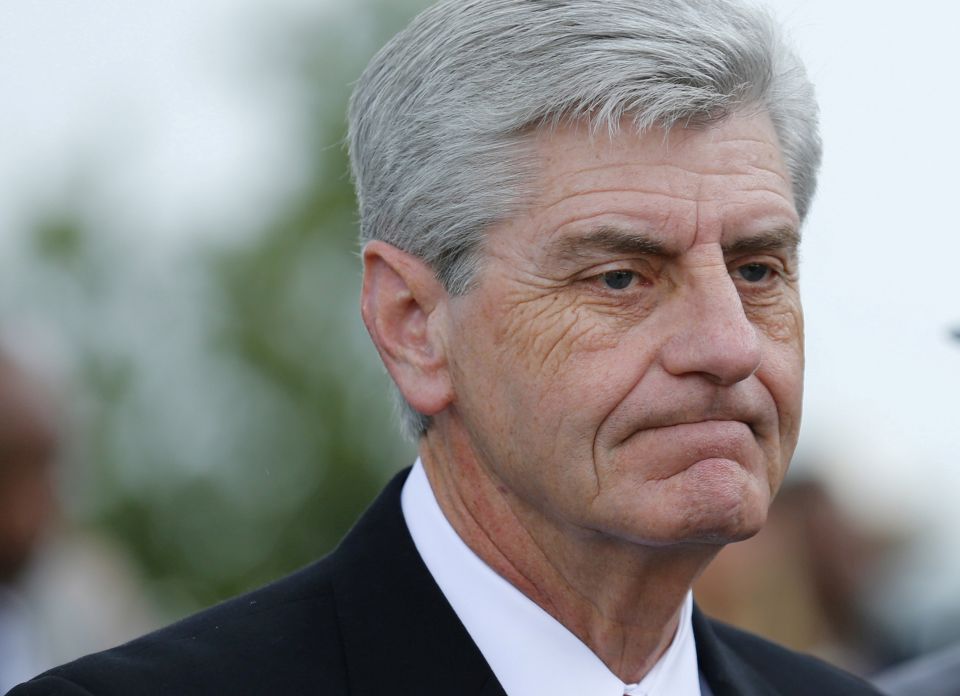 Mississippi Gov. Phil Bryant is pictured in a 2015 photo. On March 19 he signed into law the country's most restrictive abortion ban, prohibiting abortions after 15 weeks of pregnancy. The Jackson Women's Health Organization, along with a physician who works for the clinic, immediately sued in federal court over the measure, claiming it is unconstitutional. (CNS/Mike Blake, Reuters)

Jackson, Mississippi — Mississippi Gov. Phil Bryant signed into law March 19 the most restrictive state abortion bill in the nation because it bans abortions after 15 weeks of pregnancy.

At a morning hearing March 20, a federal judge blocked the law with a temporary restraining order, in effect for 10 days. The state and the clinic must now provide "expedited briefings" to the court while it considers issuing a preliminary injunction.

The owner of the state's only abortion clinic, Jackson Women's Health Organization, filed suit immediately after Bryant signed the bill, claiming it is unconstitutional. A judge was holding a hearing on blocking the law March 20.

"We Catholic bishops of Mississippi wish to reaffirm the sacredness of human life from conception until natural death," said Bishop Joseph Kopacz of Jackson and Bishop Louis Kihneman III of Biloxi. "With Pope St. John Paul II, we recognize abortion as 'a most serious wound inflicted on society and its culture by the very people who ought to be society's promoters and defenders.'"

The bishops issued their joint statement after the Mississippi House passed the measure 75-34 in February. The state Senate passed H.B. 1510 March 6 in a 35-14 vote.

In commending the state's lawmakers, Kopacz and Kihneman also criticized lawmakers in Congress who let the Pain-Capable Unborn Child Protection Act fail in the House of Representatives.

In a March 16 podcast, Bryant had anticipated the suit against the new but said he expects to win in court, no matter how high the case goes in the courts.

"We will go to the (U.S. Court of Appeals for the) 5th Circuit -- which is traditionally more conservative on appeal -- than some of the others around the nation. And if we go all the way to the Supreme Court, we are willing to do that," he said.

The Supreme Court has ruled in the past against abortion laws involving babies who could not survive outside the womb, which would include the Mississippi ban.

"We are protecting the unborn children in this state, many of whom are minorities, many of whom are female, obviously who are, at 15 weeks, moving in their mother's womb. They are kicking, they have developed taste buds, their eyelids are moving, their hands and feet have been formed," Bryant said.

"This is a human being at 15 weeks and we are going about protecting women and minorities from being torn apart by one of these later term abortions," he added.

The law does not exempt pregnancies resulting from rape or incest.  There are only two exceptions to the ban: if an unborn child has health problems that would make him or her "incompatible with life" outside of the womb at full term, or if a pregnant woman's life or a "major bodily function" is threatened by continuing the pregnancy.

The Susan B. Anthony List, a national pro-life organization, praised Bryant and state lawmakers "for their commitment to making Mississippi 'the safest place in America' for unborn children and their mothers."

The organization's president, Marjorie Dannenfelser, described Mississippi as being "at the vanguard of the growing momentum to bring our laws back into line with basic human decency. It is one of 20 states that have passed popular, compassionate legislation to stop cruel late-term abortions after five months."

She continued, "Our nation's permissive regime of abortion on-demand at any point in pregnancy established in Roe v. Wade and Doe v. Bolton has made the United States a global outlier and does not reflect the will of most Americans -- especially where late-term abortions are concerned. Absolutely nothing was settled."

Dannenfelser called the status quo on abortion "unjust" and "untenable." "It is in states like Mississippi where the greatest progress toward righting it is being made," she added. "It is about time the courts caught up."

The afternoon the bill was signed, a member of the 40 Days for Life prayer team stood at the entrance to Jackson Women's Health Organization. Ron Leaderhook, a member of Dayspring Community Church in Clinton, said he tries to show the love of God to everyone he meets there, whether it be staff or clients. He said he was happy to hear the ban was signed and would continue to pray for the clinic to close.

How should Catholics feel about a new Supreme Court Justice?

Youths must help world see God has plan for 'each life,' priest says