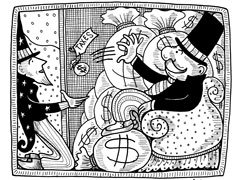 “The tax system should be continually evaluated in terms of its impact on the poor.” So stated the U.S. bishops in their 1986 pastoral “Economic Justice for All.” They enunciated three guiding principles:

First, the tax system should raise adequate revenues to pay for the public needs of society, especially to meet the basic needs of the poor. Secondly, the tax system should be structured according to the principle of progressivity, so that those with relatively greater financial resources pay a higher rate of taxation. The inclusion of such a principle in tax policies is an important means of reducing the severe inequalities of income and wealth in the nation. ... Thirdly, families below the official poverty line should not be required to pay income taxes. Such families are, by definition, without sufficient resources to purchase the basic necessities of life. They should not be forced to bear the additional burden of paying income taxes.

These principles reflect Catholic tradition and the new Catholic catechism. In 1961, in Mater et Magistra, Pope John XXIII stated the core principle, “As regards taxation, assessment according to the ability to pay is fundamental to a just and equitable system.” In the catechism, payment of taxes is integral to one’s responsibility for the common good: “Submission to authority and co-responsibility for the common good make it morally obligatory to pay taxes, to exercise the right to vote, and to defend one’s country.”

Progressivity is fundamental to the Catholic tax tradition. It reflects belief in the universal destination of all goods -- they must serve the common good -- as well as stewardship of all creation, whose origin is God. As stewards, this progressivity reflects the teaching of Jesus in Luke 12:48: “From everyone to whom much has been given, much will be required; and from the one to whom much has been entrusted, even more will be demanded.”

Evaluating tax morality requires measuring the progressivity and regressivity of systems -- the more progressive, the more moral. In general, personal income tax can be the most just system, if structured progressively. A flat tax is regressive since, by definition, it taxes the wealthiest and poorest families at the same rate. Even income tax systems with nominally graduated tax rates may be regressive where, for instance, the percentage of those paying the highest rate is very large (66 percent of Alabama families pay the highest rate, starting at $6,000 of taxable income for couples).

Estate taxes can be progressive if they tax larger estates at higher rates, and elimination of estate taxes is regressive since it allows wealthy families to hold excessive wealth for generations.

Property taxes typically are “somewhat regressive” because poor homeowners and renters pay more of their income than other groups and the wealthiest owners pay the least.

Finally, sales taxes and excise taxes (e.g., on cigarettes, gasoline and beer) are the most regressive because they take a larger share of income from low and moderate income families. State systems relying heavily on sales taxes are very regressive. One moderating factor can be exclusion of necessary items such as groceries.

We’ve heard much about our debt and deficit in this campaign, and we can expect even more. Importantly, our bishops reminded last summer’s debt reduction “super-committee” that raising revenues must be integral to any solution: “A just framework also requires shared sacrifice by all, including raising adequate revenues, eliminating unnecessary military and other spending, and addressing the long-term costs of health insurance and retirement programs fairly.”

How do we morally measure the tax proposals from the remaining Republican candidates and President Barack Obama?

Candidates Newt Gingrich, Mitt Romney and Rick Santorum each propose, not added revenue, but plans that over 10 years will cost $18.1 trillion, $6.6 trillion and $9.4 trillion. The Gingrich plan would give the richest 1 percent of Americans a tax cut 190 times that of the middle fifth of taxpayers, while the tax cuts for the wealthiest in the Romney and Santorum plans would be 100 times that of the middle fifth. (Candidate Ron Paul would eliminate the income tax completely, substituting a national sales tax or “flat tax.”)

The president’s tax plan reduces revenues by $3.5 trillion by making permanent 78 percent of the Bush tax cuts, actually costing $4.2 trillion over 10 years due to the increased interest on the debt. His income tax plan is more “progressive” by reducing the tax cuts for the wealthiest, but it fails to raise added revenue. His corporate tax plan, heralded for raising $250 billion by closing loopholes, gives that away in lower corporate tax rates, to become “revenue neutral.”

All these plans and that of House Budget Chairman Paul Ryan (R-Wis.) propose massive tax cuts when U.S. total taxes -- federal, state and local -- are among the lowest of industrialized countries, and where brutal cuts in Medicaid, Medicare, Social Security, and discretionary domestic and defense spending are put forward for reducing the debt and deficit. Go figure!